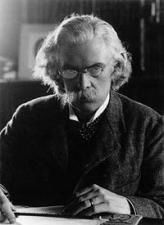 Mittag-Leffler was the eldest son of John Olaf Leffler and Gustava Wilhelmina Mittag. His father was a school principal and from 1867 to 1870 a deputy in the lower house of the Swedish parliament. The atmosphere at home was intellectually stimulating, and Mittag-Leffler’s aptitude for mathematics was recognized and encouraged at an early age.

Mittag-Leffler entered the University of Uppsala in 1865 and obtained the doctorate in 1872. He remained at the university as a lecturer for a year, but in 1873 left on a traveling scholarship for Paris, Göttingen, and Berlin. On the advice of Hermite, whom he met in Paris, he went to study under Weierstrass in Berlin. Weierstrass exerted a decisive influence on his subsequent development.

In 1877 Mittag-Leffler wrote his Habilitationsschrift on the theory of elliptic function and, in consequence, was appointed professor of mathematics at the University of Helsinki. In 1881 he left Helsinki for Stockholm, where he became professor of mathematics at the newly established Högskola (later the University of Stockholm). He twice served as rector. Among his colleagues there were Sonya Kovalewsky and E. Phragmén. Mittag-Leffler was an excellent lecturer. Among his students were I. O. Bendixson, Helge von Koch, and E. I. Fredholm.

Mittag-Leffler was not among the mathematical giants of his time, but he did contribute several methods and results that have found a lasting place in the mathematical literature. His most important contributions clearly reflect Weierstrass’ influence. Thus, where Weierstrass had given formulas for the representation of entire functions and of elliptic functions, Mittag-Leffler set himself the task of finding a representation for an arbitrary meromorphic function f(z) which would display its behavior at its poles. The answer is of classical simplicity. Let {zn} be the set of poles of f(z) so that {Zn} is either finite or is infinite and possesses a limit point at infinity. In the former case the answer is trivial since f(z) differs from an entire function only by the sum of its principal parts, ∑hn(z-zn). In the latter case, this sum is infinite and may diverge. Convergence is reestablished by adding to the individual terms of the sums certain suitable polynomials.

A generalization of this result, also due to Mittag-Leffler, is concerned with the case where the set {zn} while still consisting of isolated points may have limit points also in the finite plane. Another field that was pioneered by Mittag-Leffler is that of the representation of an analytic function f(z) beyond the circle of convergence of its power series round a given point. Taking this point, without loss of generality, as the origin, one defines the (principal) Mittag-Leffler star of the function with respect to the origin as the union of the straight segments extending from the origin to the first singularity of the function in that direction (or to infinity). Mittag-Leffler developed analytic expressions that represent f(z) in the entire Mittag-Leffler star. The later evolutions of this subject led to its being subsumed under the heading of the theory of summability, where certain infinite matrices are now known as Mittag-Leffler matrices.

Mittag-Leffler was a prolific writer, and the list of his publications includes 119 items. But his importance as a research worker is overshadowed by his prominence as an organizer in many spheres of scientific activity. He was the founder and, for many years, the chief editor of the highly influential Acta mathematica, to which he attracted important contributions by men such as E. Borel, G. Cantor, J. Hadamard, D. Hilbert, J. Jensen, V. Volterra, H. Weber, and above all H. Poincaré.

Mittag-Leffler’s relationship with Cantor is of particular interest. Mittag-Leffler himself said of his work on meromorphic functions and of its generalizations that it had been his endeavor to subsume Weierstrass’ and Cantor’s approaches to analysis under a single point of view. And Cantor regarded Mittag-Leffler as one of his most influential friends and supporters in a hostile world.

Mittag-Leffler was very conscious of the importance of maintaining a record of the contemporary history of mathematics for posterity, and the pages of Acta mathematica contains reprints of many exchanges of letters between notable mathematicians of the period. He wrote a moving account of the relationship between Weierstrass and Sonya Kovalewsky.

He was one of the organizers of the first and of subsequent international congresses of mathematicians and was the recipient of many honors, including doctorates from the universities of Bologna, Oxford, Cambridge, Christiania (Oslo), Aberdeen, and St. Andrews.

Mittag-Leffler was married to Signe af Lindfors in 1882.