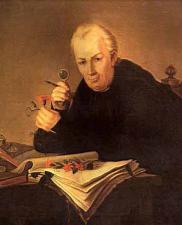 José Celestino Mutis (1732-1808) was a Spanish-Colombian naturalist, physician, and mathematician. He assembled one of the richest botanical collections in the world of his time.

During the middle and later decades of the 18th century the Spanish government subsidized scientific expeditions and encouraged individuals to determine the natural wealth of its American colonies by the systematic study of their flora and fauna. One of these investigators who won world renown was José Celestino Mutis, a descendant of a Majorcan family in the Balearic Islands. He was born in Cadiz, Spain, on April 6, 1732, and spent the last 48 years of his life in Bogotá, the capital of viceregal New Granada and the later Republic of Colombia.

After studying medicine and philosophy at the University of Seville and continuing work in the natural sciences and mathematics while teaching anatomy at the University of Madrid, Mutis visited European centers of learning at government expense. These included Stockholm, where he came under the influence of the great Swedish botanist Carolus Linnaeus, who was to pay high tribute to the achievements of his disciple at Bogotá.

Appointed the personal physician of the viceroy of New Granada, Pedro Mesia de la Cerda, in 1760, Mutis accompanied this official to Bogotá, where for nearly half a century he actively furthered research and the teaching of botany, entomology, medicine, mineralogy, mathematics, and astronomy. He was the first to explain Newton's theories in that part of America, and he successfully defended the doctrine of Copernicus before the Inquisition. He advised viceroys on educational and economic matters while carrying on extensive correspondence with European scholars which brought him membership in the Academy of Science of Paris and of Stockholm.

From 1760 to 1790 Mutis kept a diary of observations on the natural sciences and made contributions in these fields both by original discoveries and by applying new knowledge to the rudimentary economy and medicine practiced in the Spanish American colonies, where he also introduced vaccination. Especially renowned were his studies of quinine (cinchona) and the establishment of its various pharmacological classifications.

Probably Mutis's most remarkable accomplishment was the creation of the Botanical Mission in 1783, a center for collecting and mapping the distribution of every kind of flora and fauna of Colombia; a corps of draftsmen and artists was employed to prepare thousands of colored drawings and large plates of the many species. So beautifully executed were the paintings of this large collection that it excited the unqualified admiration of the great German scientist Alexander von Humboldt, whose years of travel in colonial Spanish America resulted in comprehensive and well-documented works in many volumes that remain indispensable to this day. The herbaria of Mutis's collection are prudently estimated at from 20,000 to 24,000 specimens representing some 5,000 distinct species.

Pope , Pueblo religious and political leader Sources Early Spanish Contact. Popé was a revolutionary leader of the Pueblo peoples of present-day southwester… Simon Bolivar , Simón Bolívar (1783-1830) was a South American general and statesman who brought political independence to six present-day nations. Called the Libera… Creoles , Creole In Spanish America, the term "creole" (criollo) refers to people of European descent, especially Spaniards who were born in the New World—in c… Jose De Acosta , Acosta, José de There is perhaps no more potent expression of the tense and complex relationship between the European colonial enterprise and the wor… Puerto Rico , PUERTO RICO is the easternmost and smallest of the Greater Antilles. Located between the Atlantic Ocean to the north and the Caribbean Basin to the s… Mestizo , Mestizo Mestizo, a term used in the colonial era to refer to a person of evenly mixed Indian and Hispanic ancestry. The first generation of mestizos…