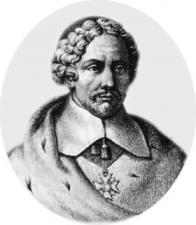 Tournefort, who had one brother and seven sisters, came from a family of the minor nobility. His father, Pierre Pitton, a lawyer and royal secretary, was seigneur of Tournefort; his mother, Aimare de Fagoue, was the daughter of a royal counselor at the chancellery of Provence. Destined at first for the Church. Tournefort received an excellent education in the classical languages and science from the Jesuits. His father’s death in 1677 enabled him to prepare for his future vocation, natural history, especially botany. Until 1683 he divided his time between herborizing and courses in chemistry, medicine, and botany (taught by Magnol) at the University of Montpellier. For several months each year he traveled through the countryside and mountains of the Alps, the Midi, the Pyrenees, and Spain–often accompanied by such botanist friends as Charles Plumier and Pierre Garidel.

In 1683, at the recommendation of Mme de Venelle, a grande dame at court and originally from Aix, Tournefort was chosen as substitute for Guy Fagon, professor at the Jardin du Roi, in Paris. His new post required him not only to teach botany but also to enrich the holdings of live plants in the garden. Each year between 1685 and 1689 he undertook long herborizing expeditions in the Midi and to Holland, England, and especially to the Iberian Peninsula, where he stayed for over a year. In 1691, at the nomination of the Abbé Bignon, he entered the Académie des Sciences; and from 1693 he was Fagon’s sole substitute at the Jardin du Roi.

Although Tournefort had published only an edition of his lecture notes entitled Schota botania (1689) and prepared by one of his English students, William Sherard, he was already one of Europe’s most noted botanists and had dozens of correspondents, including Magnol at Montpellier and Herman at Leiden.

Between 1694 and his death in 1708 Tournefort’s work was marked by two major events. The first was the publication of his Élémens de botanique (1694), which appeared in three volumes, two of them consisting of illustrations executed by Claude Aubriet; the work was translated into Latin as Institutiones rei herbariae (1700). The second was his voyage to the Levant (1700-1702). Tournefort’s account of this voyage, published posthumously in 1717 and translated into several languages, still makes interesting reading. Tournefort’s subsequently published writings represent only a small portion of his scientific work, however. At his death, the result of an accident, he left twelve folio volumes on botany, two of which were ready for the press: “Herborisations aux environs de Paris” and “Nomenclature des plants observes en France, en Espagne, et en Portugal,”

The study of living nature, especially of plants, was characterized in the seventeenth century principally by two major currents of research, one dealing with classification and the other with the inner structures of plants and their functions. These movements were not unrelated, and naturalists such as John Ray and Sébastien Vaillant introduced into classification certain fundamental notions from anatomy and biology. Tournefort was less open in this respect: he knew nothing of plant sexuality, refused to employ the microscope, and divided the plant into almost independent parts that he considered as separate entities. These important limitations in his work provoked widespread and often severe criticism. Yet this criticism was unfair to the extent that it failed to take into account Tournefort’s overall intentions and the rigor with which he carried them out.

What botany owes to Tournefort is not the invention of the biotaxonomic genus, which had imposed itself empirically on observers since antiquity, but rather the creation of the concept of the genus in the modern sense and its first skillful applications. His teacher at Montpellier, Magnol, had refined the concept of family (1689), although no doubt prematurely, for it was not taken up again for more than half a century. The classificatory unit that most attracted Tournefort was the genus–a “cluster of species,” as he put it–a natural grouping having a real existence, independent of the observer, and identifiable. His goal was to “reduce each species to its true genus” and to define the genus by character or, as it would be called today, by diagnosis. Once identified, each genus was to receive a name that would evoke only the characteristic expressed in its description, and the name was to be as simple as possible–although tradition should not be completely disregarded. Above all, Tournefort carefully distinguished the act of describing from that of naming.

Tournefort’s conception of genus contains a fundamental new contribution that was elaborated in the work of Linnaeus, Bernard de Jussieu, and Adanson. The distinct paths of taxonomy and nomenclature were now acknowledged. Linnaeus defined the species and, in a completely natural way, imposed the binary nomenclature; Jussieu and Adanson made knowledge of natural units at all levels the aim of their research.

In addition to genera, Tournefort suspected the existence of higher units, which he called classes, but in practice he scarcely treated them as such. Rather, like the divisions, he used them most often as quite arbitrary means of identifying species. Absorbed in the huge task of making an inventory of the genera in the material at hand, Tournefort did not have time to consider each species in detail. He was satisfied simply to rely on Gaspard Bauhin’s Pinax, which, in his opinion, contained a perfectly satisfactory definition of species.

Tournefort’s revolution was aided by his exceptionally broad botanical experience, the fame he acquired following his trip to the Levant, and his personality. His deep concern for clarity, simplicity, and rigor in his writings was the source of his attractive style and convincing argumentation. Unfortunately, it also resulted in a certain schematism and, ultimately, led to the superficiality of his method. The Élémens and the Institutiones are milestones in the history of taxonomy not only for the conceptual advances they reflect but also for the wholly new form in which they are cast. The text of the Élémens is in French, accompanied by a technical dictionary, and it is closely related to Aubriet’s illustrations. The result is a well-integrated and easily accessible whole that could not fail to produce a sensation. Thus, although Tournefort’s work disregarded the major biological discoveries of the seventeenth century, within its self-imposed limits it clearly outlined the avenues of study that led to the modern system of classification.

On the level of principles, Tournefort contributed powerfully and brilliantly to the establishment of objectivity in taxonomy and of research methods suitable for a natural method of classification. (His own system, based upon the flower and the fruit, chiefly the corolla, was, however, highly artificial.) While he was far from discovering the principle of subordination of characteristics, his method displayed a certain subordination related to his recognition of natural units existing at different levels. Further, Tournefort played a decisive role in the emancipation of botany from medicine.

Tournefort’s gener–he accepted 725–have largely been retained, through the work of the leading taxonomists of the eighteenth century. Almost one-third of the genera of French flora derive from Tournefort. His herbarium, one of the treasures of the Muséum d’Histoire Naturelle at Paris, contains 6, 963 species.

A well-rounded naturalist, Tournefort was also interested in minerals and shells, and his natural history collection included three thousand specimens of shells (G. Brice, cited by G. Ranson in Tournefort [Paris, 1957], 106). In addition, Tournefort was a physician with a considerable practice. Through his teaching and his publications he exerted an enormous influence until the end of the eighteenth century.

oxford
views updated
Tournefort, Joseph Pitton de (1656–1708) A French botanist who became a professor at the Jardin du Roi in Paris and is remembered for producing a system of plant classification and nomenclature in the 1690s. His Institutiones Rei Herbariae (1700) helped to bridge the gap between the work of Bauhin and Linnaeus. He also wrote A Voyage into the Levant (1718) in which he was the first to describe the common azalea and rhododendron, as well as other plants he collected during this journey. The tribe Tournefortia of the Boraginaceae was named for him.