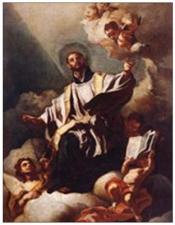 St. Cajetan (1480-1547), who was born Gaetano da Thiene, was one of the earliest Italian Catholic reformers of the 16th century. He was a cofounder of the Clerks Regular, a religious order popularly known as the Theatines.

Cajetan was born into an aristocratic family of Vicenza in October 1480. He studied at Padua and in 1504 received his doctorate in canon and civil law. In 1505 he went to Rome, where Pope Julius II invited him to join the papal service as a secretary. On Sept. 30, 1516, he was ordained a priest. Cajetan was a kind, energetic, and practical man whose life was marked by strict poverty and intense activity. With other men, including the humanist Pietro Bembo, he organized the Roman Divino Amore, or the Oratory of Divine Love—not to be confused with St. Philip Neri's Congregation of the Oratory. Cajetan's Oratory provided a program for common prayer and discussion of spiritual topics.

In 1518, because of his mother's sickness, Cajetan returned to Vicenza. Intent on helping others, especially the sick, he founded a hospital for incurables there. In 1520 he did the same at Venice, where he also initiated the practice of exposing the Blessed Sacrament in a monstrance for adoration by the congregation. Back in Rome, he again became an active organizer. In 1523, with Giampietro Carafa (later Pope Paul IV), Bonifacio de' Colli, and Paolo Consiglieri, he formed a group of priests who combined religious life with apostolic activity. So adamant was Cajetan on the vital place that poverty held in his ideal that he refused to allow even begging. To distinguish these priests from earlier organizations of religious, they became technically known as Clerks Regular. On June 24, 1524, Pope Clement VII gave them his approval. They were generally called Theatines, probably because the Latin form for Carafa's see of Chieti was Theate. Carafa was elected the first superior, and in 1527 Cajetan became the second superior.

The Theatines made a deep impression and soon spread to other cities of Italy. After the sack of Rome in 1527, during which Cajetan suffered great personal indignity, the Theatines moved to Venice and Verona. In 1533 they opened their apostolate in Naples, where Cajetan was the first superior. And there, with the exception of a few years in Rome and Venice, Cajetan spent the rest of his life. Ever the practical organizer, he was one of the first movers for a modern type of credit union to help the poor of the city. With his energetic life Cajetan united profound prayerfulness, severe penance, and adherence to the strictest kind of poverty. Toward the close of his life a riot broke out against the Inquisition, and Cajetan tried in vain to calm the disturbance. With this disappointment he died at Naples on Aug. 7, 1547. He was canonized on April 12, 1671.

A good biography of St. Cajetan is Paul H. Hallett, Catholic Reformer: A Life of St. Cajetan of Thiene (1959). Written in a popular style, which is at times pietistic, it provides a full and detailed study. See also Herbert Thurston and Donald Attwater's edition of Butler's Lives of the Saints, vol. 3 (1956). □

Paul Vi , Paul VI Paul VI Paul VI (1897-1978) became pope of the Roman Catholic Church in 1963. He reigned during a period of great change and ferment in the C… Benedict Xiv , Pope Benedict XIV (1675-1758) was one of the most eminent popes of his century and considered by his contemporaries one of Europe's leading learned m… Saint Catherine Of Siena , St. Catherine of Siena St. Catherine of Siena 1347–1380 Catholic nun Special Destiny. Born Katerina di Benincasa at Siena in western Italy, she was t… Baldassare Cossa , John XXIII JOHN XXIII JOHN XXIII (Angelo Giuseppe Roncalli, 1881–1963) was a pope of the Roman Catholic church (1958–1963). Born in Sotto il Monte, n… Vatican City , Culture Name Alternative Names Orientation Identification. The Vatican, or Vatican City, is the center of Roman Catholicism and the residence of the… Clement Vii , Elected pope of the Catholic Church in times of religious and political turmoil, the reign of Clement VII (1478-1534) was marked by a brutal attack o…