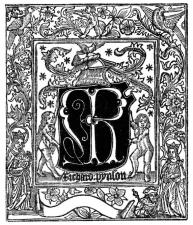 The English prose and verse writer Richard Rolle of Hampole (ca. 1290-1349) gave the first formal expression to English mysticism and exerted a very important intellectual influence on the 14th century.

Richard Rolle of Hampole was neither a priest nor a monk but a simple layman. Born in the vicinity of Thornton-le-street, the son of William Rolle, a gentleman of Richmondshire, he was sent to Oxford by Thomas de Neville, who saw great intellectual promise in the boy. Rolle progressed well in his studies until at the age of 19 he had a deeply moving mystical experience of love and union with God. He returned home intent on serving God by contemplation as a hermit. He borrowed two gowns from his sister and a rain hood from his father to make a habit and tried to set up a hermitage in the nearby woods. He had an unsatisfactory time of it until one day he was recognized by John de Dalton, son of his former benefactor, as he donned a surplice in the Dalton chapel and, with ecclesiastical permission, preached a moving sermon. The Nevilles set him up on the estate with shelter, food, and suitable clothing.

It was not long before Rolle discovered that curious and intrusive friendship can destroy those essentials of a contemplative life, solitude and peace of mind. For a time he sought over the countryside for what he needed. At length he found a spot near the Cistercian convent of St. Mary's at Hampole. Here his freedom was unhampered, and he settled down for a course of contemplative prayer. His experiences could not be contained, and they overflowed in passionate writing. At first he wrote in Latin, the language of the learned. Little by little, as his reputation for holiness spread, he was asked for advice and guidance. Since many who appealed to him were simple people, he turned to English, the vigorous, malleable Northumbrian dialect. His manuscripts were widely distributed and highly prized, some of the more than 400 extant being passed down in wills as family heirlooms.

Rolle died in Hampole in 1349, perhaps from the plague which was ravaging the country at the time. He had built an enduring reputation for holiness which encouraged the nuns at St. Mary's to write an office in view of a probable canonization. It is from this office that we learn most of the details of his life.

Rolle's writing was a stupendous achievement. Of the English prose tracts, some running to 10,000 words, the following are outstanding: The Form of Perfect Living, Ego dormio et cor meum vigilat, A Commandment of the Love of God, and the Commentary on the Psalter. With these, his Latin works, his many shorter prose tracts, and his many versified themes, he influenced people as dissimilar as the great mystic Walter Hilton and that bumbling seeker for true sanctity Margery Kempe. His style is passionate and personal but controlled by moderation, reasonableness, and a sense of humor.

Two indispensable works on Rolle are George C. Heseltine, Selected Works of Richard Rolle, Hermit (1930), which contains both prose and verse, and Hope E. Allen, English Writings of Richard Rolle, Hermit of Hampole (1931), which includes good biographical notes. Much background information about mysticism as a Christian phenomenon is in Gerard Sitwell, Spiritual Writers of the Middle Ages (1961), and David Knowles, The English Mystical Tradition (1961).

Roger Mcguinn , The Byrds The Byrds Rock band Originators of folk-rock and pioneers of acid- and country-rock, the Byrds were one of the most influential bands in ro… Tufts University , toff •boff, cough, doff, far-off, off, quaff, roll-on roll-off, scoff, telling-off, toff, trough •lay-off, payoff, playoff •show-off • Khrushchev • G… Roulade , roulade •Assad, aubade, avant-garde, backyard, ballade, bard, Bernard, bombard, canard, card, charade, chard, couvade, croustade, Cunard, facade, gli… Rock And Roll , rock and roll Form of popular music. Originating in the USA in the early 1950s, it appealed largely to a white audience who found its forerunner, rhy… Esther Rolle , Rolle, Esther 1922– Actress Esther Rolle is best remembered by many people for her portrayal of the sympathetic but strict mother of three on the 197… Iggy Pop , Pop, Iggy Singer, songwriter, drummer “Iggy had gone beyond performance—to the I point where it really was some kind of psychodrama,” said John Sincl…