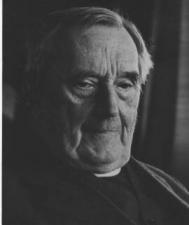 William Ralph Inge (1860-1954) was a Church of England clergyman, scholar, social critic, authority on Plotinus and Christian mysticism, and prolific but controversial writer of popular essays and books. He served as dean of St. Paul's Cathedral from 1911 to 1934.

William Inge was born June 6, 1860, at Crayke in the North Riding, Yorkshire. His father was curate of Crayke and later provost of Worcester College, Oxford. Inge was educated at home by his parents until he entered Eton on a scholarship. In 1879 he went up to King's College, Cambridge, where he won numerous scholarships and prizes. He took first class honors in the classical tripos and returned to Eton in 1884, where he served as assistant master for four years.

In 1888 Inge was elected fellow and tutor of Hertford College, Oxford, where he taught the Greek and Latin classics and published learned studies. He did not become a priest until 1892. He was Bampton Lecturer in 1889; the lectures were published as Christian Mysticismin 1899, the first of 30 books on religion and social criticism. Christian Mysticism was widely read, and it launched Inge's career as an influential writer on religion. The work pioneered a new interest in the study of mysticism, and a number of important works on the subject soon followed, including those of Friedrich von Hügel and Evelyn Underhill.

Inge's study also focussed renewed attention on the place of experience in the religious life. Both of these themes underlined Inge's dissatisfaction with the orthodox seats of religious authority in either an infallible church or an infallible bible. For Inge, the ground of faith resides essentially in the depths of religious experience itself. This was also a central tenet of the turn-of-the-century Anglican Modernism, and Inge became one of its leading spokesmen.

In 1904 Inge left Oxford to become vicar of the fashionable Church of All Saints, Ennismore Gardens. The same year he married Mary Catharine Spooner, daughter of the arch-deacon of Maidstone. Inge was a shy, aloof, melancholy, and irritable man, but his marriage at middle age brought him a measure of freedom from his earlier depression. In 1907 he was elected Lady Margaret's Professor of Divinity at Cambridge and fellow of Jesus College. During his stay in Cambridge he continued his researches on Christian mysticism and resumed his long study of Plotinus and neoplatonism. Books published during this period included Personal Idealism and Mysticism (1907) and Faith and Its Psychology (1909). His magnum opus on Plotinus was the subject of the Gifford Lectures delivered in the University of St. Andrews in 1917 and 1918 and published as The Philosophy of Plotinus (2 volumes). Inge's own philosophical sympathies were neoplatonic, and his platonic and idealist convictions carried forward a long tradition in English religious thought that was sustained through the writings of William Temple. A small book, Speculum Animae, published in 1911, the year he was appointed dean of St. Paul's, reveals Inge's personal religion.

When Inge was selected for the deanery of St. Paul's by Prime Minister Asquith he joined a succession of distinguished Anglican men of letters, including John Donne, in that position. Some would say that Inge spent more time on his journalistic activity—for a time, two or three articles a week—than on the affairs of St. Paul's. However, he became a celebrated preacher who drew large congregations to the cathedral. Interest in his sermons was due to his outspoken and provocative manner of expression and his genuine independence of mind. His weekly articles for the Evening Standard were widely read for a period of 25 years. He was one of the most popular English journalists and was tagged "the gloomy Dean" by the Daily Mail—a nickname which stuck—because of his denunciations of current folly and his prophesies of imminent doom. One writer said that, looking out upon the world from the dome of St. Paul's, Dean Inge found it very bad. He attacked optimists of every kind and those who believed in progress, democracy, and socialism. He expressed an antipathy for the Irish, the United States, and especially the Roman Catholic Church. Inge was aristocratic and often showed contempt for the working classes; he seemed incapable of understanding the causes of social unrest. He held social Darwinian views and felt that efforts at social equality meant disaster for civilization. He advocated birth-control and eugenics and served as a member of the council of the Eugenics Society.

Inge wrote a number of books during his tenure at St. Paul's, including Personal Religion and the Life of Devotion (1924), Christian Ethics and Modern Problems (1930), and God and the Astronomers (1934), the most systematic presentation of his idealist metaphysics. He was active for many years in the Modern Churchman's Union and served as its president from 1924 to 1934. These Modernists shared a commitment to unfettered enquiry, to liberal theology, and to a latitudinarian ecclesiology. However, even here Inge's position was unique. Unlike many Modern Churchmen he was an advocate of mysticism, and he was severely critical of the Roman Catholic Modernists, George Tyrrell and Alfred Loisy.

After his retirement from St. Paul's Inge continued to publish popular books, including The Diary of a Dean as late as 1949. His last public lecture was in Westminster Abbey in 1951. Inge died on February 16, 1954, at the age of 94. He received many honors during his life. In addition to the Bampton and Gifford Lectures, he was Romanes, Paddock, Rede, and Hibbert lecturer. He received numerous honorary degrees and was an honorary fellow of Hertford College, Oxford, and Jesus College and King's College, Cambridge. He was president of both the Aristotelian Society and the Classical Association. He was elected Fellow of the British Academy in 1921 and received additional honors in 1918 and 1930.

Inge's influence is hard to judge. His work on Plotinus, neoplatonism, and mysticism was influential. He made valuable contributions to the ongoing movement of Anglican Modernism, being one of its chief defenders of theological freedom. His popular books and journalism had an impact at the time, but they have not remained of continuing interest. Nevertheless, they are the work of a prose craftsman of unique mind and literary skill, and Inge deserves a place in the chronicles of English religious prose writing.

Anglican clergyman and author; b. Crayke, Yorkshire, England, June 6, 1860; d. Wallingford, Berkshire, England, Feb. 26, 1954. Educated at Eton and King's College, Cambridge, he became assistant master at Eton (1884), fellow at King's College (1886), fellow and tutor at Hertford College, Oxford (1889), vicar of All Saints', Knights-bridge (1905), and Lady Margaret Professor of Divinity at Cambridge (1907). When he was dean of St. Paul's, London (1911–34), his criticisms of the spirit of secular optimism earned him the sobriquet "The Gloomy Dean." He was named knight commander of the Victorian Order in 1930.

Inge's advocacy of Christian platonism, with its tradition of "mysticism based on a foundation of reason," found expression in many widely read works, among them Christian Mysticism (1899), Faith and Knowledge (1905), Personal Idealism and Mysticism (1907), Studies of English Mystics (1906), Faith and Its Psychology (1919), The Philosophy of Plotinus (1918), and The Platonic Tradition in English Religious Thought (1926).

His critical treatments of contemporary thought include major works such as God and the Astronomers (1933). Two series of Outspoken Essays (1919, 1922) deal with a variety of subjects. Christian Ethics and Modern Problems (1930) is an examination of 20th-century personal and social morality. Inge's provocative views and brilliance of style made him one of the outstanding clerical and literary figures of his day.