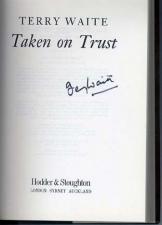 Terry Waite (born 1939), an official of the Church of England, made three trips to Lebanon in an effort to free westerners held hostage there. On his third try in 1987, he himself was taken hostage and not freed until almost five years later.

Even after publication of his book Taken on Trust, chronicling his 1,763 days of being held by Islamic fundamentalists in Lebanon, Terry Waite remains a controversial figure. For many years he was a hero to the British media and public. When he was captured and throughout the years during which there was no news of his whereabouts, prayers were said in churches all over Britain for his safe return. To some he remained a saintly and courageous figure, the innocent envoy from the archbishop of Canterbury, whose intercession saved the lives of a number of Middle East hostages. But to others, notably including journalists specializing in Middle East affairs, he was a muddle-headed meddler and publicity-seeker who allowed himself to be used by Oliver North and the Central Intelligence Agency (CIA). Waite allegedly took credit for hostage releases that had almost everything to do with arms deals and little to do with his efforts. To those critics he was a man who defied his church's wishes for his own vainglory and who put his family on the rack to feed his own hunger for headlines. When he was united with fellow hostages John McCarthy, Terry Anderson, and Tom Sutherland during the last year of his captivity, they were reported to have found him an awkward companion. And in Taken on Trust he is evasive about his knowledge of the Iran-Contra affair.

Although he says of himself in his book: "Inwardly you are a small, frightened child, anxious to impress people," there is certainly no denying the courage of the seventeen stone (238 pounds), 6 foot 7 inches man who spent almost five years in captivity, nearly four years of it in solitary confinement, after he was seized by Islamic Jihad from a gobetween's house in Lebanon on January 20, 1987. Before his release in November 1991 he was frequently blindfolded, beaten, and subjected to mock executions. He lived much of the time chained to a radiator, suffered desperately from asthma, and was transported in a giant refrigerator as his captors moved him about. And yet he emerged from his ordeal able to make a witty and eloquent speech to the waiting media before even greeting his family. In his earlier efforts for other hostages he had shown total disregard for his own safety as virtually the only western figure who ever gained direct access to the kidnappers.

Terry Waite, whose entry in Who's Who ironically records one of his hobbies as "travel, especially in remote parts of the world," was born on May 31, 1939, the son of a village policeman, and spent his early life in Styal, Cheshire. He left school at 16, having learned the prayer book by heart. He did not last the two-year National Service period in the Grenadier Guards, being discharged after a year because of an allergy to the dye in the uniforms. He then took a degree in theology at the Church Army College in London but decided he did not want to be ordained a priest.

His first job was as an adviser on adult education to the bishop of Bristol from 1964 to 1968. Soon after that, working in Africa for the bishop of Uganda, he was taken hostage for the first time with his wife, Frances, and two children.

In the early 1970s he worked for the Roman Catholic Church as a widely-traveled consultant on missionary work. In 1980 Robert Runcie, the archbishop of Canterbury, appointed him secretary for Anglican Communion Affairs to work with churches abroad and to organize the arch-bishop's foreign trips. In this role he quickly became a media figure. After a few months he played the key role in securing the release of a missionary, his wife, and the bishop of Iran's secretary, Jean Waddell, when they were held on spy charges in Tehran. At one stage he greeted the arrival of five gunmen in a cell where he was celebrating holy communion by coolly repeating his sermon. After his efforts had led to the release of a fourth detainee, appreciation for Waite's role was shown with the award of a Member of the British Empire (MBE) in the next honors list.

Waite's reputation as an emissary extraordinary was cemented when in 1984 he established contact with Colonel Muammar Gadaffi in Libya, where four Britons had been detained following the murder of a policewoman outside the Libyan Embassy in London. He eventually secured their release after protracted negotiations and his own theological discussions with the Libyan leader on Christmas Day.

Over the next two years there followed a series of efforts on behalf of four American hostages held in Lebanon, including one when he was dropped at dead of night by an American helicopter. In this period some critical articles began to appear suggesting that Waite was obsessed with his own publicity, but he insisted that although he had frequent meetings with Oliver North he was never told about the efforts to trade hostages for arms. When the Irangate storm broke, he said in a statement from his arch-bishop's Lambeth Palace headquarters: "At no time have I ever had any dealings in arms or money."

His third and final trip to Lebanon in 1987 was made despite a visit from the British ambassador, who urged him not to go because the Amal militia had lost out to the more extreme pro-Iranian Hizbollah faction. Waite himself described the trip that led to his capture and incarceration as "a walk into a minefield." But he insisted he had to go ahead because he was the one person who had met the kidnappers face to face.

Soon after his release in 1991 Terry Waite resigned his position with the archbishop and became fully engaged with writing his book Taken on Trust, published in September 1993. He took up a fellowship at Trinity Hall, Cambridge, and said that he hoped to use proceeds of his writing to help the poor and to work for justice and reconciliation. True to his word, in July 1996 Waite, along with fellow former hostage John McCarthy, sent messages urging the release of four people on the first anniversary of their capture in Kashmir. Waite's various honors include the Commander of the Order of the British Empire bestowed upon him by Queen Elizabeth II.

Terry Waite's own account of his earlier life and his nearly five years as a hostage, Taken on Trust, was published in London (September 1993). Other books by Lebanon hostages include Brian Keenan's An Evil Cradling (1993) and Terry Anderson's Den of Lions (1993). Further light is cast on the Lebanon hostages affair in the various histories of the Iran-Contra affair chronicling the doings of Oliver North. Waite's mid-1990s activities have been noted in various news services including Yereth Rosen, "Britain still seeking release of Kashmir hostages," Reuters (July 3, 1996); and Patricia Edmonds, "Iran-Contra Charge," USA Today (May 5, 1994). □

Orthodoxy , Orthodoxy African Orthodox Church, Inc Albanian Orthodox Diocese of America American Carpatho-Russian Orthodox Greek Catholic Church American Exarcha… Downstairs , down·stairs / ˈdounˈste(ə)rz/ • adv. down a flight of stairs: I tripped over the cat and fell downstairs. ∎ on or to a lower floor: we were waiting f… Elizabeth Bishop , Bishop, Elizabeth BISHOP, Elizabeth (b. 8 February 1911 in Worcester, Massachusetts; d. 6 October 1979 in Cambridge, Massachusetts), prize-winning po… Donatus , Donatus Donatus (died ca. 355) was the schismatic bishop of Carthage during the first decades of the Donatist movement. Little is known of Donatus be… Patriarchate , PATRIARCHATE Part I: Historical Developments A patriarchate (Gr. πατριαρχεíα, Lat. Patriarchatus ) is a patriarch's office, see, reign, or, most ofte… Tom Waits , Singer, songwriter, actor Although he has applied his many talents to acting and composing for stage and screen, Tom Waits's performances on albums a…