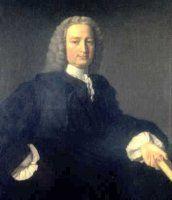 oxford
views updated
Hutcheson, Francis (1694–1746). Scots-Irish philosopher. Educated for the kirk at Glasgow University, he returned to Ireland, taught at a dissenting academy in Dublin, and became the most prominent member of Viscount Molesworth's radical Whig circle. He made his reputation by publishing three metaphysical treatises between 1725 and 1728 attacking Mandeville's sceptical The Fable of the Bees, and attempting to prove that the roots of human sociability lay in a moral sense which would make men and women sociable and virtuous. Professor of moral philosophy at Glasgow from 1729 to 1746, he revolutionized the university's moral philosophy curriculum and attempted to justify toleration and a radical interpretation of the British constitution in terms of the principles of human nature. Distrusted by orthodox presbyterians, he was regarded by Hume and Adam Smith as an inspirational if misguided student of human nature. His political thought was much admired in colonial America.