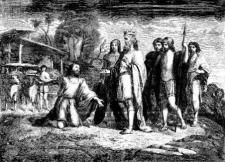 ARAUNAH (Heb. אֲרַנְיָה, אֲוַרְנָה, אֲרַוְנָה; variant in Chronicles: Ornan (אָרְנָן)), most probably the last Jebusite ruler of Jerusalem whom David spared after conquering the city. The word Araunah is non-Semitic in origin, probably Hurrian and possibly a title, as it occurs once with the definite article (ii Sam. 24:16 and ibid. 23 "the king…" cf. Hurrian ewri, "governor"). When David offended God by taking a census, plague struck his realm, killing 70,000. In answer to his prayer, it halted outside Jerusalem when the angel of the Lord had reached the threshing floor of Araunah. That day the prophet Gad commanded David to erect an altar to the Lord on this spot. David asked Araunah to sell him the threshing floor, but Araunah offered to give it to him together with his oxen for sacrifice, the threshing boards and ox yokes for firewood, and the wheat for a meal offering. David, however, refused to accept the offer, paid Araunah 50 silver shekels (in i Chron. 21:25 – 600 gold shekels), and then built an altar (ii Sam. 24:15 ff.; i Chron. 21:15 ff.). (There is a certain similarity between this transaction and the purchase of the cave of Machpelah by Abraham; Gen. 23.) Solomon built the Temple on this site (ii Chron. 3:1). The same verse connects this location with Moriah where the *Akedah took place (cf. Jos., Ant., 7:333). It may have been public property, and Araunah, as the ex-ruler of the city, was thus entitled to dispose of it. i Chronicles 21:20 possibly speaks of "his (?) four sons." According to rabbinic tradition Araunah's skull was found on the Temple site in the time of Hezekiah (tj, Pes. 9:1, 36c) or after the return from Babylon (tj, Sot. 5:4, 20b). According to the Talmud Avodah Zarah 24b, he was a "proselyte of the gate."

ABIGAIL , ABIGAIL ABIGAIL (Heb. אֲבִיגַיִל), name of two women in the Bible. (1) abigail wife of Nabal the Carmelite (see *Carmel) and later of David. Abigail… AMNON , ABSALOM ABSALOM (Heb. אַבְשָׁלוֹם, אַבְשָׁלֹם, אֲבִישָׁלוֹם), third son of *David, born during his reign in Hebron, probably about 1007/06 b.c.e. In… Manasseh , MANASSEH (Heb. מְנַשֶּׁה; perhaps "one who causes [an earlier deceased, child] to be forgotten"), king of Judah (698–643 b.c.e.), son of *Hezekiah. M… Hiram , Hiram HIRAM Heb. חִירוֹם ,חִירָם, "My-(divine) Brother-is-Exalted," apparently shortened from Aḥiram, a longer form attested as the name of a king of… David , David DAVID (Heb. דָּוִד), youngest son of Jesse of the Ephrathite family that lived in Beth-Lehem in Judah (i Sam. 16:1; 20:27–28; i Chron. 2:13–15;… Asaph , Asaph ASAPH (Heb. אָסָף), name of four biblical figures. (1) The ancestor of one of the principal families of singers in the Temple. According to i C…