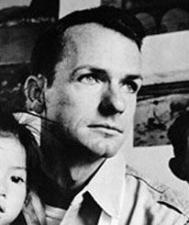 Doctor and humanitarian, who helped to organize the Medical International Corporation (MEDICO); b. St. Louis, Mo., Jan. 17, 1927; d. New York, N.Y., Jan. 18, 1961. As the son of a well-to-do St. Louis family, Dooley graduated from Notre Dame University, Ind., and the St. Louis University medical school. After two years' service as a U.S. Navy doctor in Indo-China, he resigned from the service and with three other former medical corpsmen offered to establish a privately financed medical mission in Laos. In 1958 the International Rescue Committee agreed to take Dr. Dooley's "Operation Laos" under its aegis, and MEDICO was organized to provide medical care in remote areas. Less than a year later, Dooley contracted melanoma, a rapidly diffusing form of cancer, which despite frequent hospitalization and an operation soon caused his death. Within five years, Dooley oversaw the establishment of seven hospitals in four Asian nations, and personally raised almost two million dollars for MEDICO. He made numerous speaking tours and published Deliver Us From Evil (1956), The Edge of Tomorrow (1958), The Night They Burned the Mountain (1960), and Dr. Tom Dooley, My Story (1960). On May 27, 1961, the U.S. Congress authorized the striking of the Thomas A. Dooley medal in recognition of the Catholic missionary doctor's contributions to humanity.