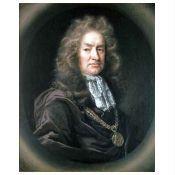 Elias Ashmole was the only child of Simon Ashmole, a Lichfield saddler, and Anne Ashmole (nee Bowyer). In keeping with the family’s humble social position, Elias was educated at Lichfield Grammar School, in the expectation that he would enter a craft. Through the intervention of James Pagit, a relative of the Bowyer family, he settled in London, however, and there obtained legal training. He established a law practice in 1638 but practiced only sporadically, for he was involved in the Royalist faction during the first part (from 1641 to 1646) of the Civil War. A fortunate marriage then provided him with independent means that reduced his reliance on the income from his law practice.

In 1660 Ashmole’s loyalty to the crown was rewarded by Charles II, who granted him the offices of comptroller of the excise and Windsor herald. He was successful in both offices; the former provided a large income, and he devoted his intellectual energies to the latter. He contributed greatly to the revival of English heraldry and in the course of his work gained an encyclopedic knowledge of its history and complex rules.

His chambers at the Middle Temple and South Lambeth house were used to display substantial and famous antiquarian collections. Ashmole’s office at the College of Arms brought him considerable social prestige, and he became well known in court circles. In religious and political matters he was excessively conservative and orthodox. His closest friends, however, were drawn from the eccentric and varied class who shared his obsession with alchemy and astrology. These interests showed no diminution in his later life, despite his association with the Royal Society, whose view of nature undoubtedly did not accord with his own.

Ashmole married three times but had no children. His first wife was Eleanor Manwaring; the second was a rich widow, Lady Mary Manwaring (nee Forster); the third was Elizabeth Dugdale, daughter of Sir William Dugdale, Ashmole’s friend and a prominent antiquarian.

Ashmole’s scientific outlook was deeply influenced by the mathematicians and astrologers with whom he associated during the Civil War. Both factions in the war made use of astrology, which became a fashionable and respectable scientific pursuit; its influence affected various disciplines from mathematics to medicine. While serving in the Oxford garrison in 1645, Ashmole became acquainted with the Royalist astrologers George Wharton and Sir John Heydon. After retiring from the conflict in 1646, he formed his most significant and lasting astrological friendship, with the Parliamentarian astrologer William Lilly, who had greatly contributed to the revival of astrology in England. Ashmole’s first published writings were two short translations of astrological works included in Lilly’s Worlds Catastrophe (1647).

From astrology, Ashmole gradually extended his interests to botany, medicine, and stenography. Inevitably, alchemy attracted him, and he became the eager pupil of William Backhouse of Swallowfield, Berkshire. Alchemy appealed to Ashmole’s mystical and antiquarian instincts. As a practical and contemplative study, it appeared to offer the key to the secrets of nature; its antiquarian aspect lay in the collection and publication of the rare and often corrupt texts that formed the basis for its theory. Ashmole aspired to publish the “choicest flowers” of alchemical literature, and his first book, the Fasciculus chemicus (1650), was a modest translation of works by Arthur Dee and Jean d’Espagnet. By this time he had embarked upon a more ambitious enterprise—the restoration of English astrology. He hoped to produce a comprehensive collection of English verse and prose alchemical works, drawn from manuscript sources. This project had an auspicious beginning with the publication of the Theatrum chemicum Brittanicum (1652), a collection of verse alchemical works that displayed Ashmole’s industry, erudition, and editorial skill. The Prolegomena indicate familiarity and agreement with the leading themes of Hermetic philosophy.

After the publication of this work, Ashmole’s alchemical activities diminished. The only other English alchemical work he published was The Way to Bliss (1658). Ashmole saw no incompatibility between the occult sciences that he favored and the experimental natural philosophy that was becoming a dominant influence among his contemporaries. He regarded them as complementary means of discovering the fundamental principles of natural philosophy. Consequently, he was mildly interested in experimental science, became a founding fellow of the Royal Society in 1660, and made significant bequests to the society’s museum.

Ashmole’s other scientific activities diminished considerably after 1660, as he concentrated on the duties connected with his crown appointments. His major intellectual energies were increasingly absorbed by the compilation of the history of the Order of the Garter, begun in 1655 and completed in 1672. This book has become a major reference work on many aspects of heraldry. At the same time he continued collecting books, manuscripts, and archaeological and scientific “rarities.” This was not an uncommon avocation among the gentry of Restoration England, but Ashmole exceeded others in his zeal for collection and in his desire to replace ephemeral personal “cabinets” with permanent public museums.

In 1675 he offered his collections to Oxford University, on the condition that suitable housing was provided for it. The university gladly complied, and the elegant museum, designed by Thomas Wood, was opened in 1683. This was the first English public museum, and Ashmole actively supervised its affairs. He added to the collections and persuaded other collectors, notably the zoologist Martin Lister, to make donations. His protégé, Robert Plot, who shared his patron’s alchemical interests, was appointed keeper of the museum and first professor of chemistry. The museum was equipped with a laboratory that became the focus for scientific activities at Oxford. Thus, paradoxically, Ashmole created the institutional basis for the growing tradition of experimental science while himself representing the declining magical and astrological outlook.

I. Original Works. Ashmole’s works include Fasciculus chemicus: Or, Chymical Collections. Expressing the Ingress, Progress, and Egress, of the Secret Hermetick Science, out of the Choicest and Most Famous Authors (London, 1650), written under the name of James Hasolle and presenting translations of Arthur Dee’s Fasciculus chemicus (1629) and Jean d’Espagnet’s Arcanurn hermeticae philosophiae (1623); Theatrum chemicum Britannicum. Containing Severall Poeticall Pieces of Our Famous English Philosophers, Who Hare Written the Hermetique Mysteries in their owne Ancient Language (London 1652), reprinted with an introduction by A. G. Debus as No. 39 in the series Sources of Science (New York 1967); The way to Bliss. In Three Books (London, 1658); Sol in Ascendente: Or, The Glorious Appearance Of Charles the Second, Upon The Horizon of London (London 1660), an anonymously published poem celebrating the Restoration; A Catalogue of the Peers of the Kingdome of England (London, 1661); A Brief Narrative of His Majestie’s Solemn Coronation (London 1662); “The Worlds Catastrophe, or the Miraculous Changes, and Alterations,... in several Kingdoms, and Commonwealths of Europe...,” translated from Franciscus Spina’s De mundi catastrophe (1625), and “A Prophecie of Ambrose Merlin...,” from Geoffrey of Monmouth’s Historia regum Britanniae, in William Lilly’s The Worlds Catastrophe, Or, Europes many Mutations untill 1666 (London, 1647); and The Institution, Laws & Ceremonies of the Most Noble Order of the Garter (London, 1672).