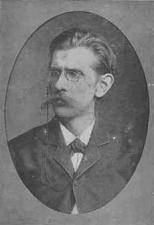 The works of the Danish author Jens Peter Jacobsen (1847-1885) were the first in Danish literature to interpret man naturalistically.

Jens Peter Jacobsen was born at Thisted on April 7, 1847. For many years he was torn between science and literature, and he struggled all his life with a strong tendency to dream, an important theme in his writings. In 1873 he won a university gold medal for a scientific dissertation. His articles on Charles Darwin and his translations of Origin of Species and Descent of Man did much to spread Darwin's theories in Scandinavia. Parallel with his scientific work, he wrote poetry. In the early 1870s he became an influential member of the circle around Georg Brandes, who was beginning his agitation for a modern, realistic literature based on European models.

Jacobsen made his debut in 1872 with the story "Mogens," a controversial departure in Danish literature. Man is seen, for the first time, as an animal governed biologically like all other animals, rather than by forces—ideals— outside himself. In 1873, full of plans for new scientific and literary work, Jacobsen was stricken with tuberculosis and told that he did not have long to live. He abandoned his scientific plans and devoted his last 12 years to literature, producing under the most difficult conditions two remarkable novels and a handful of poems and stories, a small production that yet ranks with the most original and enduring works in Danish literature.

Marie Grubbe (1876) is Denmark's first genuinely naturalistic novel. Jacobsen interprets his heroine, a historical person, in terms of her heredity and environment, showing with exquisite subtlety how these forces and her unconscious and semiconscious impulses determine her behavior. Jacobsen's technique, appropriate to the new view of man, is the literary equivalent of impressionism in painting.

Jacobsen's second novel, Niels Lyhne (1880), also a psychological novel, is a deeply personal study of a man living in a period of transition when a deistic view of life is succumbing to a naturalistic one. Niels is intellectually able to abandon the old views, but emotionally he fails, since he cannot find a new philosophy to give meaning to his life. The shadow of Jacobsen's own end is upon Niels Lyhne, and the central character (soon to become a common type in Scandinavian literature) is too deeply split, trapped in his biological prison, to realize his ambitions.

Jacobsen's novels and the best of his stories have had an important influence on Scandinavian literature for their penetrating psychology, their themes, and their style, which lift them out of the times in which they were written. Jacobsen died on April 30, 1885, at the age of 38.