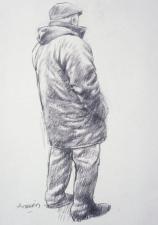 oxford
views updated
Aneurin (late 6th cent.). Bard. Almost everything known about Aneurin has to be conjectured from the epic poem he composed, Y Gododdin, recounting a disastrous raid on the Anglo-Saxons of Bernicia and Deira by the Britons of Gododdin in Lothian (c.600). But the text has been added to. Nennius, Historia Brittonum (c.796), named him along with Taliesin as one of the five Welsh bards during the struggle against the Northumbrians. Aneurin speaks as an eye-witness of the battle and of the dead heroes as his kinsmen, from which it has been inferred that he belonged to the Gododdin: others have suggested that he was a visiting bard, possibly from Elmet. A case has been made that he could have been a brother of St Deiniol, patron saint of Bangor.