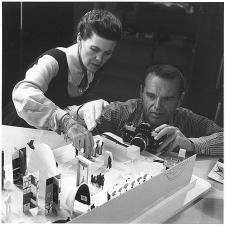 oxford
views updated
Eames, Charles Orman (1907–78). American designer, one of the most significant and versatile of his time. His reputation as an architect rests on his own dwelling at Pacific Palisades, Santa Monica, CA (1945–9—one of Entenza's Case Study houses), steel-framed structure owing something to the work of Mies van der Rohe: it was an important example of industrialized building. He was even better known as a designer of moulded plywood chairs and other furniture, especially the Eames Chair (1940–1), produced with Eero Saarinen (whom he met while at Cranbook Academy). With his second wife, Ray Kaiser (1916–88), he shared credit for all his design projects after their marriage in 1941.