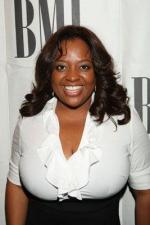 When comedian Sherri Shepherd graduated from high school, her thoughts were on becoming a mortician or a secretary. Secretary won, and she spent years toiling in secretarial jobs before coming to rely on her natural talent for humor as a stand-up comedian and actress. She began appearing on several shows, either as a guest star or in a recurring role. She could be seen on programs such as Friends, The Jamie Foxx Show, Everybody Loves Raymond, and Joan of Arcadia.

Sherri Shepherd was born on April 22, 1970, in Chicago, Illinois. She and her three sisters grew up in the Chicago suburb of Hoffman Estates where her father was a manager of a local McDonalds. During her high school years, her parents divorced and her mother moved the family to California. After graduating from high school, Shepherd went to trade school to learn secretarial skills then began working for various companies.

Shepherd could always make people laugh, but used this talent early in life for friends and family. After watching Andrew Dice Clay perform, her friends encouraged to her to try her hand at doing stand-up comedy. She agreed, and soon began performing around the area while still holding on to her secretarial position. Unlike Clay and numerous others, Shepherd, being a Christian, only performed clean comedy. After a couple of years of this, she won a role on a new NBC show, Cleghorne!, starring Saturday Night Live alum Ellen Cleghorne. Unfortunately, the show lasted only one season. Shepherd had not saved any money so she returned to working as a secretary during the day while performing at night and on the weekends.

After doing this for a couple more years, Shepherd quit her secretarial job to become a full-time comedian and actress. She honed her talent by taking acting classes at the Joan Baron/DW Brown Studio. Her new focus paid off with a series of guest starring roles on Living Single, Friends (she was the first African American to win a guest role on the show) and Suddenly Susan, where two years later, she became a series regular. Shepherd also had recurring roles on Everybody Loves Raymond and The Jamie Foxx Show. She soon became a regular on chef Emeril Lagasse's Emeril. She played Lagasse's uncouth stage manager, Melva. The series was panned by many critics, and ratings were extremely low. The show was canceled after a few airings. Shepherd told the Zap2it Web site that "The roller coaster was fun, and when it ended, I got off the ride…. I'm not saying nothing. I may want to eat at his restaurant."

Immediately following the cancellation of Emeril, Shepherd joined John Cleese and Ed Begley, Jr., on the short-lived Wednesdays 9:30 (8:30 Central). She followed this program with ABC sitcom Less Than Perfect, which also starred comedian Andy Dick. In addition to her part as Ramona Platt on Less Than Perfect, she also lent her voice to Disney Channel's animated show, Brandy & Mr. Whiskers.

After becoming someone Hollywood could depend on for laughs, Shepherd soon focused on winning roles in films. She won a small part in Cellular, which starred Kim Basinger. She followed that with a turn as comedian Bernie Mac's best friend in the 2005's remake, Guess Who. In the same year, she also starred with Queen Latifah in Beauty Shop. She played a pregnant hairdresser, bringing laughs to the well-received film. Shepherd told the Writing Studio website she had always wanted to work with Queen Latifah. "It's been a dream of mine to work with her. My entire career, she has always been like a mentor to me; she's always represented women so well. I just screamed when they told me I got the part." She also had to endure a beauty boot camp. "You know what I realized from that whole boot camp experience? It is NOT what I was called to do. The first 20 minutes I was like 'My back is hurting, okay? I'm an actress, not a hairstylist.' They thought they had free labor, so they had me washing all these people's heads. I was like 'Wait a minute! Nobody's paying me!' Nobody was tipping me! It was hard—but we learned," she stated to the Writing Studio Web site.

Though Shepherd has mostly worked on television, she did not forget her roots as a stand-up comedian. She continued to perform at various clubs around the country, including The Comedy Store and The Laugh Factory. She has also been a regular guest on several talk shows, including Politically Incorrect, Ellen, Jimmy Kimmel Live and The View. She also spent a week on game show Hollywood Squares, and also appeared on Pyramid, hosted by Donny Osmond.

Shepherd's Christianity informed her life. Feeling blessed herself, Shepherd worked to share her joy by offering others compassion and providing laughs. She felt this strongly while working with comedian Andy Dick. She told Dan Ewald of Christian Reader, "Andy likes to say, 'God must love me because I have Christians on either side of me [the other is Zachary Levi, also on Less Than Perfect].'" In addition, Shepherd also does not curse or do sex scenes in her appearances.

Shepherd released a gospel comedy titled No Refund, No Exchange. She also has collaborated with other Christian comedians and released Comedy Without Compromise. She married fellow comedian Jeff T. in 2001, and the couple had a son, Jeffrey Charles Tarpley, Jr. in 2005. Their son was born 15 weeks premature, but was released from the hospital 90 days after his birth. She told the AOL Blackvoices Web site that "I think I did too much running around…." The birth of her son has not slowed Shepherd down. She co-hosted Celebrity A-List Bloopers on ABC, and was nominated for a BET comedy award for her work on Less Than Perfect.

Work for African-American actresses in Hollywood has never been fully actualized, and Shepherd was no exception. She told Dave Mason in a Scripps Howard News Service article she believed that Hollywood "… [doesn't] think the part is for an African-American. For a lot of roles, the breakdown is for a white woman. They need to expand their thinking—maybe an Asian woman, maybe a black woman can play it." Shepherd has worked steadily since appearing on Friends. At that rate, she will continue to wow audiences with her hilarious performances.

Nina, "Psychologists Without Borders," The Trouble with Normal, ABC, 2000.

Recorded the comedy album No Refund, No Exchange.

Carol Burnett , Burnett, Carol Actress, comedienne, singer Carol Burnett’s contributions to musical theater have been eclipsed by her longstanding career as a comedi… Ellen Degeneres , DeGeneres, Ellen Comedian, actress, author Ellen DeGeneres is one of the most popular contemporary comedians and the host of a successful daytime tal… Richard Pryor , Richard Pryor 1940– Comedian, actor, writer At a Glance… A Tragic Background Early Career Moves Fame Brought Its Own Troubles Lonely at the Top A Sec… Elise Neal , Actress With a starring role on a popular television sitcom and several film roles to her credit, Elise Neal, nicknamed the “Tennessee Tulip,” is wel… Damon Wayans , Wayans, Damon 1961– Comedian, actor, writer, film director In 1990 comedian Damon Wayans burst onto the television scene with In Living Color, an out… Dave Chappelle , Chappelle, Dave 1973— Actor, writer, comic From a very early age, Dave Chappelle could make people laugh. Chappelle realized the power of his natural…