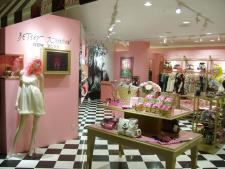 Schiro, Anne-Marie, "Betsey Johnson: Honor for a Life of Celebrating Youth," in the New York Times, 18 May 1999.

For the youthquake generation, the names Betsey Johnson and Paraphernalia symbolized the hip, young fashions of mid-1960s America just as Mary Quant and Biba did for the equivalent age group in Great Britain. In the early 1970s, a second wave of young women with a taste for affordable style discovered the flippant body-conscious clothes Johnson designed for the ready-to-wear firm Alley Cat. Throughout the 1980s and into the 1990s, Johnson's clothes have been characterized by her sense of humor and an innocent, tongue-in-cheek sexiness. Wearing a Betsey Johnson dress is like putting on a good mood.

After graduating Phi Beta Kappa and magna cum laude from Syracuse University, Johnson won a guest editorship at Mademoiselle magazine. There, colleagues put her name forward to Paul Young, who was scouting out fresh new design talent to launch his Paraphernalia boutiques. It was a good match: Young encouraged experimentation and Johnson began to develop what was to be a long-standing interest in such unorthodox materials as vinyl, sequin sheeting, and the then-new stretch fabrics. Her "kit" dress, for example, was of clear vinyl with a trim-it-yourself package of stars, dots, and ellipses cut from reflective adhesive foil. The "noise" dress had a hem fringed with loose grommets.

Johnson's approach to clothing is very much influenced by her early days as a dancer. "I am basically about a ballerina torso and a full skirt," she told a reporter for the Soho News in 1982, "a dancing school dress-up craziness." Johnson's emphasis on tight, stretch bodices also grew out of her dancing school background. Not surprisingly, the shift in the 1970s to a subdued, tailored look was incompatible with Johnson's style as a designer. She continued to have her own label with a variety of manufacturers, but it was not until the end of that decade that Johnson's real joie de vivre emerged again, this time for her own company.

Johnson's company and her girlish, bohemian style have continued to endure, despite the economic downturns of the late 1980s and the androgynous "grunge" trends of the early 1990s. In the final years of the century, Johnson's flirty and whimsical designs were again at the forefront of fashion trends. As of 2001, almost 40 Betsey Johnson stores were open worldwide, with further expansion planned. Her label is available in several upper-end department stores and specialty stores, together with Johnson's designer-price brand, Ultra. Throughout the 1990s, Betsey Johnson, Inc. continued to broaden its offerings, developing a line of accessories, jewelry, footwear, children's clothing, bath and beauty products, and fragrance. Johnson's imaginative runway fashion shows are eagerly anticipated each year, opened by the designer's trademark cartwheel down the catwalk.

The youthful spirit of the company is kept alive through Johnson's own playful personality and the design talents of a young staff, including her daughter, Lulu Johnson. Betsey Johnson is the first to admit that her designs have changed little conceptually over her long career, but she is able to manipulate this basic style to suit a contemporary mood. Johnson's loyalty to her own vision has been crucial to her success and appeal. Kal Ruttenstein, Bloomingdale's fashion director, recognizes Johnson's enduring style: "Betsey reinvents herself," Ruttenstein says. "If she keeps doing what she does, fashion comes around to her every few years."

Fashion designer Betsey Johnson, with her red hair and perpetual ear-to-ear grin, was a colorful burst of energy in the fashion world. She first exploded onto the style scene in the swinging 1960s, a turbulent time when fashion designers were considered stuffy, pretentious, and totally out-of-touch with the growing wave of street-inspired chic and the unmistakable influence of British rock and roll on American youth culture.

During this decade, Johnson helped launch the American fashion revolution with her space age silvery sci-fi dresses, see-through plastic shifts with discreet stick-on cover-ups, a "noise dress" with metal grommets at the hem that went clink-clank when the wearer moved, elephant bell-bottoms, and 14-inch metal micro-miniskirts. In those years her designs were worn by style setters such as actresses Julie Christie and Brigitte Bardot, model Twiggy, and first lady Jackie Kennedy. Over the ensuing decades Johnson continued to be an energetic leader in fashion design. As Susie Billingsley of Vogue magazine wrote: "She got on the street fashion wagon before anyone. She's always been way ahead of what's hip."

She married Velvet Underground bassist John Cale but they divorced in 1969. For three years she was involved with a sculptor, a relationship that produced her daughter, Lulu, later her top runway and print model. In the 1980s she married again."

In the 1990s, most of her clothes, available in large department stores and her more than 20 U.S. boutiques from sexy South Beach in Miami, Florida, to the ever-so-staid capital, Washington, D.C., sold for under $150. Her young and young-at-heart customers search her out, and they are fashionably faithful. Polly Mellen of Allure magazine said: "Her clothes are fun, female, flirty, slightly aggressive and teasing. Her fashion shows are always witty, fun and slightly shoddy. But in the showroom, the clothes are real and the prices right." Johnson self-deprecatingly said: "I've never had a new or brilliant idea. I just like to make things. The truth is, fashion doesn't really change all that much. I'm still doing the same things now that I was back then."

Maybe. But they are all interesting variations on her theme. Johnson ships out dozens of new styles every month to her U.S. boutiques. In 1991, she launched a new division called "Luxe," which drew from her background in dance. The more expensive line was designed to complement the skirts and leggings that had been her trademark. In 1992 she launched her sweetly sexy swimwear collection of push-up bras, bikinis with petticoats, and skirts in black lace, gingham, madras, and velvet, all priced affordably from $35 to $75. She also unleashed a line of clunky funky women's shoes. And her 1993 line of menswear looked tailor-made for all modernday Robin Hoods: velvet capes and tunics, hooded monk robes, forest and mead-hued caftans, and paisley leggings. That year also brought her own fragrance, a light floral scent of lilies and mimosas. Forever evolving, Johnson introduced a new "Ultra" collection featuring better fabrics and more elaborate styling and priced up to $500 in 1996.

Johnson was always her own fitting model: "Small top, big bottom, that's my shape. And I think it's the shape of most women." Long known for her short, tight, "boy-friend getting dresses," she also acknowledged: "Since AIDS, everyone's pulling back and clothing is getting much more reserved and more romantic."

Part of Johnson's success was her ability to sniff the winds and sense the social and subsequent style and silhouette changes. She started with the British Invasion of America style, hopped on the early 1980s punk bandwagon with safety pins and ripped T-shirts, and kept current with the 1990s rave, grunge, medieval, and deconstructionist fashion movements, all of which began on the streets and in music clubs haunted by disenfranchised youth.

Johnson clearly understood her place in a woman's closet, telling The Atlanta Journal and Constitution in 1995, "I'm usually the sparkle in a closet full of conservative clothes. Either that or my customer has a closet full of my clothes and a few conservative suits from Calvin Klein. I think you've got to give a girl what's missing from her closet. If something jazzy, tacky or sexy is what's missing, I provide it."

As 1995 brought the advent of youthful baby-doll and empire-waist dresses, Johnson explained the trend by saying, "After grunge, girls wanted to wear things that were very feminine. Something deep down said, -Is there a girl inside me?"' She simply says: "I've stopped aging in my work 25 years ago."Perhaps it is just that sense of wonder, openness, and a bizarre sense of humor that keeps this over-50 designer in touch with the youthful trends of today.