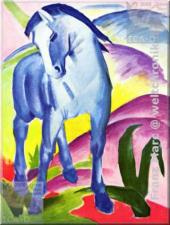 The German painter Franz Marc (1880-1916) was a cofounder of the Blaue Reiter, or Blue Rider, an influential avant-garde art group.

Franz Marc was born on Feb. 8, 1880, in Munich, the son of a painter. At the age of 20 Franz entered the Munich Academy, which had a strong academic tradition. His earliest works show the influence of the decorative, linear Jugendstil that flourished in his youth.

In 1903 Marc made his first trip to Paris, where he came into contact with impressionism. He had originally intended to become a theologian, and he now carried his religious inclinations into his pictorial investigations, treating the shapes of nature as images filled with secret meaning. He used certain cubist formal elements to imbue his art with a kind of mystical constructivism. The animal images for which he is best known are the expression of his deep union with all creation. In 1907, fleeing from an undesirable marriage, Marc revisited Paris, where the paintings of Vincent Van Gogh made a deep impression on him.

In 1909, together with Wassily Kandinsky, Marc prepared the almanac Der blaue Reiter. He discovered the great possibilities of color as a means of expression in 1910 through August Macke, who was fascinated by the Fauves. In the same year Marc moved to Sindelsdorf, where he had his first exhibition. When, in 1911, Kandinsky's Neue Künstlervereinigung (New Artists' Federation) broke up, Marc, Kandinsky, Alfred Kubin, and Gabriele Münter exhibited on December 18 in the Galerie Tannhauser as the Blaue Reiter group. This show marks one of the most important dates of the German modern movement.

From then on Marc went his own way, deepening his vision into a kind of nature symbolism. Even his colors were conceived in a symbolic manner. In the series of animal paintings of 1911, of which Red Horses is the best known, Marc detached color from nature and gave it a radiant independent life. In 1912 he met Robert Delaunay, whose Orphism was an important source of inspiration to Marc. His large animal compositions of 1912-1913, such as Tower of the Blue Horses and Animal Destinies, radiate great power. Tirol (1913-1914) offers a complex dynamics in which landscape and light, planes and lines interact. In 1914 Marc took a step toward emotional abstractionism in paintings with titles such as Serene, Playful, and Struggling.

Marc entered the army when World War I broke out. He stopped painting, but he kept a sketchbook in which he depicted problems of growth, such as Plant Life Coming into Being and Arsenal for Creation. On March 4, 1916, he was killed at Verdun.

Lyonel Feininger , The American painter and illustrator Lyonel Feininger (1871-1956) was one of the leading artists of the German Bauhaus. Lyonel Feininger was born on… Max Liebermann , The German painter Max Liebermann (1847-1935) founded the German impressionist school and coordinated its development with the modern movement in Par… Robert Delaunay , Robert Delaunay (1885-1941) was a French painter often credited with painting the first abstract canvases based on theories of pure color around the… Henry Ossawa Tanner , Tanner, Henry Ossawa 1859-1937 Painter, photographer At the beginning of the twentieth century, Henry Ossawa Tanner was highly regarded in Europe and… Emil Nolde , Emil Nolde (1867-1956) was one of the major German expressionist painters. His religious scenes, landscapes, and still lifes are distinguished by an… Hans Hofmann , Hans Hofmann Hans Hofmann The German-American painter Hans Hofmann (1880-1966) approached abstract painting through cubism and Fauvism. His teaching…