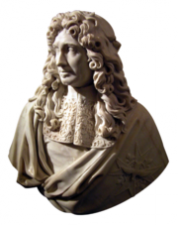 The work of the French sculptor Antoine Coysevox (1640-1720) reflected a shift in official French taste from the relatively severe classicism of the 1660s and 1670s to the more expressive and Italianate baroque style and foreshadowed the rococo.

Antoine Coysevox was born in Lyons on Sept. 29, 1640. He studied at the Royal Academy in Paris (1657-1663). By the late 1670s he was employed at Versailles with many other sculptors engaged in the task of creating fountains and statues for the vast gardens. The artists working on this project were required to conform to the demand by the Royal Academy for a restrained, classical version of the baroque style. Although Coysevox never visited Italy, his personal taste tended to the more fluid, dramatic Italian baroque, and the garden sculpture he executed in the French classical manner is generally dull and uninspired.

During the 1680s the classicism which had dominated the Royal Academy became less constricting, and by the 1690s Louis XIV was himself inclined toward a more specifically Italian baroque style. These developments freed Coysevox's expressive talent, and he gradually began to overshadow François Girardon, his most important rival and the sculptor whose work most clearly reflected the earlier French taste for baroque classicism.

A brilliant example of Coysevox's fully developed personal style is the great stucco relief sculpture (1683-1685) of Louis XIV, which he executed for the Salon de la Guerre (Hall of War) at Versailles. In keeping with the name of this magnificently pompous reception room, Coysevox's relief presents the King on horseback as a conquering emperor riding victoriously over his fallen enemies. The bursting composition, the dramatic use of space, the boldly vigorous high relief, and the lively surface of this work are stylistic characteristics which constitute a break with French classicism.

Coysevox executed over 200 pieces of sculpture, including garden statues, religious works, portrait busts, reliefs, and tombs. His important tomb for Cardinal Mazarin (1689-1693; now in the Louvre, Paris) is surrounded by three richly draped bronze female figures personifying virtues and depicts Mazarin, in marble, kneeling on top of the tomb; the cardinal's gesture is lively and vibrant, and the long train of his vestment flows behind him in dramatic twists and folds and overlaps the edges of the tomb.

Coysevox's later works reveal marked tendencies toward the rococo, the light, delicate, intimate style which was to dominate the arts during the first half of the 18th century. These tendencies are especially to be seen in Coysevox's late portrait busts and in works such as the Duchesse de Bourgogne as Diana (1710) at Versailles. The duchess is shown as a lighthearted goddess of the hunt, her pose animated, her draperies gently agitated by her movement; the composition is pierced with space, and the surface presents a refined contrast of delicate textures. Coysevox died in Paris on Oct. 10, 1720.

The most important works on Coysevox are in French and include Georges Keller-Dorian, Antoine Coysevox (2 vols., 1920), and Luc Benoist, Coysevox (1930). For a brief but thorough and excellent analysis of Coysevox's place in 17th-century French art see Sir Anthony Blunt, Art and Architecture in France, 1500-1700 (1953; rev. ed. 1957). □

Jean Goujon , The French sculptor Jean Goujon (ca. 1510-ca. 1568) designed sculpture for architectural settings. His work in low relief is comparable to some of th… Benvenuto Cellini , The Italian goldsmith and sculptor Benvenuto Cellini (1500-1571) is considered the greatest goldsmith of the Italian Renaissance. He was also the aut… Daniel Chester French , Daniel Chester French (1850-1931) was one of America's leading sculptors of the late 19th century and maintained his popularity and fame well into th… Jean Auguste Dominique Ingres , Jean Auguste Dominique Ingres Jean Auguste Dominique Ingres (1780-1867) was the most important French painter in the neoclassic tradition during the… Francesco Primaticcio , Francesco Primaticcio The Italian painter, sculptor, and architect Francesco Primaticcio (1504-1570) was instrumental in transplanting mannerist pala… Etienne Maurice Falconet , Étienne Maurice Falconet (1716-1791), a versatile and facile French sculptor, incorporated late baroque, rococo, and neoclassic elements in his work…