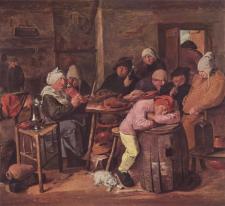 The Flemish painter Adriaen Brouwer (c. 1605-1638) exerted an immense influence on his contemporaries. His success as a painter of genre subjects ensured the popularity of scenes of peasant life in Dutch and Flemish painting of the 17th century.

Adriaen Brouwer was born at Oudenaarde in the southern Netherlands. There is no reliable account of his training as an artist. He lived in Holland, working in Haarlem and Amsterdam, from about 1625 until 1631. In Haarlem he undoubtedly knew and was influenced by Frans Hals. An early painting, typical of Brouwer's Dutch period, is the Pancake Man, which, with its lumpish, misshapen peasant types and strong local colors, recalls the 16th-century Flemish master Pieter Bruegel the Elder.

In 1631 Brouwer was in Antwerp, where he was listed as a master in the Guild of St. Luke (the painters' guild) and where he remained until his death, at only 32 years of age, in 1638. During these few years the artist produced some masterpieces. In works such as the Peasants Playing Cards the sharp local colors of the early period have been replaced by an all-embracing tonality and a more painterly handling, probably derived from Hals; and the observation of human foibles and passions has likewise become more acute and sympathetic. Despite their sometimes coarse subject matter, Brouwer's figure paintings are remarkable for their sensitive color and refinement of execution. Not to be overlooked among the works of the last Antwerp years are his landscape paintings, which have a surprising freshness and poetic quality.

The records plainly show that Brouwer was a man of unconventional behavior: he undoubtedly led a rather bohemian existence and was frequently in debt. Nevertheless, it should be emphasized that the traditional picture of the artist as a dissolute and irresponsible buffoon is largely an invention of early biographers, who seem to have believed that Brouwer's manner of life resembled that of the uncouth boors in some of his tavern scenes.

Both Peter Paul Rubens and Rembrandt paid Brouwer the compliment of acquiring paintings by his hand for their own collections. Brouwer's principal followers in the rendering of peasant subjects were the Dutch painter Adriaen van Ostade and the Flemish painter David Teniers the Younger.

The best books on Brouwer are by Dutch and German scholars. An early attempt to define the artist's output is C. Hofstede de Groot, Catalogue Raisonné of the Works of the Most Eminent Dutch Painters, vol. 3 (trans. 1911). The fundamental study, still not supplanted, is Wilhelm von Bode's monograph in German, Adriaen Brouwer, sein Leben und seine Werke (1924), which contains all the documents relating to the artist's life; Bode regarded Brouwer as "the most gifted Netherlandish master of the 17th century after Rembrandt and Rubens," and this assessment of the painter and his work has not been seriously modified by subsequent scholarly investigation. Gerard Knuttel, Adriaen Brouwer, the Master and His Work (trans. 1962), is a well-illustrated monograph which seeks to present a new critical evaluation of the painter and his artistic development. □

Claude Monet , The French painter Claude Monet (1840-1926) was the seminal figure in the evolution of impressionism, a pivotal style in the development of modern ar… Pablo Picasso , Pablo Picasso Pablo Picasso The Spanish painter, sculptor, and graphic artist Pablo Picasso (1881-1973) was one of the most prodigious and revolution… Flemish Art And Architecture , Flemish art and architecture, works of art and structures produced in the region of Europe known for centuries as Flanders. Netherlandish art is anot… Roger Van Der Weyden , Rogier van der Weyden The Flemish painter Rogier van der Weyden (1399-1464) was the most influential northern artist of the 15th century. His style i… Rachel Ruysch , Ruysch, Rachel Dutch painter Rachel Ruysch (1664–1750) is regarded by many as the best female Dutch artist of the 17th and 18th centuries. A student… Jacob Jordaens , Jacob Jordaens Jacob Jordaens Jacob Jordaens (1593-1678) was a Flemish painter of prodigious energy and lively imagination. He is one of the outstand…