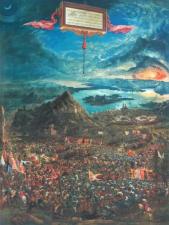 The German painter, draftsman, printmaker, and architect Albrecht Altdorfer (ca. 1480-1538) contributed to the evolution of landscape painting. He was a major figure of the so-called Danube school, whose artists created a fantastic, picturesque style of land scape painting.

The son of the engraver Ulrich Altdorfer, Albrecht Altdorfer was probably born at Regensburg. In 1505 Albrecht was listed as a painter from Amberg when he became a citizen of Regensburg. By 1513 he was married and purchased a house at Regensburg.

Throughout his life Altdorfer was active in the affairs of his city. In 1519 he is mentioned as a member of the City Council for External Affairs, and in 1526 he was elected to the City Council for Internal Affairs. That year he was appointed city architect, in which capacity he supervised the building of the city wine cellars and slaughterhouse (1527). In 1528 he declined to allow the city to elect him mayor. His wife died in 1532, leaving him a childless widower. Altdorfer was a member of the council which, in 1533, decided to adopt Lutheranism at Regensburg. In 1535 he traveled to the imperial court in Vienna on an official visit for the city of Regensburg. He died on Feb. 14, 1538, and was buried in the church of the Augustine Cloister, of which he had been named overseer in 1534. A prosperous citizen, at his death he owned several houses and had numerous other possessions.

Altdorfer's earliest preserved works are chiefly engravings and drawings, which show a marked interest in Italian prints, noticeable also in his first signed painting, the Satyr Family (1507). This panel, a St. George in a Wood (1510), and a Holy Night (1510-1515) are small and reveal a characteristically poetic feeling for the minutiae and light of landscape. In St. George in a Wood the landscape elements are so fused in color and detail with the figures as to render the latter almost indistinct, and in the Holy Night the mysterious moonlight shining on the bricks and wood relegates the figures to a secondary role.

After 1510 Altdorfer's paintings became larger, and he employed a more monumental and heroic language with vivid coloring. Particularly indicative is the altar (ca. 1518) for the monastery of Sankt Florian, near Linz, Austria. Consisting of scenes from the Passion and from the legend of St. Sebastian, the work is striking for its dynamic movements, bold spatial effects with strong foreshortenings and emphatic perspective schemes influenced by the painting of Michael Pacher, and dramatic lighting effects. These characteristics are also present, though more subdued, in the panels of the Finding of the Body of St. Florian (ca. 1520) and the Birth of the Virgin (ca. 1521). During this period, which lasted until about 1526, Altdorfer produced his first pure landscape paintings, of which the Danube Landscape near Regensburg (ca. 1521) is an outstanding example.

In the work of his last period, from about 1526, Altdorfer became increasingly interested in color and in architectural constructions of Renaissance inspiration. This may be observed especially in Susanna at the Bath (1526) and the Allegory of Riches and Poverty (1531). In Lot and His Daughters (1537) and the 22 surviving fragments of fresco decoration that he executed for the Emperor's Bath in the Bishop's Palace, Regensburg, about 1530, Altdorfer adopted Italian Renaissance figure forms but with a flavor that was distinctly German. His most important painting of the period, the Battle of Alexander (1529), commissioned by Duke Wilhelm IV of Bavaria, illustrates Altdorfer's ability to organize a multitude of detail of miniaturistic scale in a cosmological vision that embraces both sky and terrain. The personal fate of the protagonists, Alexander and Darius, is subordinated to the agitated action of the armies in the vast panorama.

Among Altdorfer's many drawings, the marginal illustrations he did for the Prayer Book of Emperor Maximilian I in 1515 hold an important place. Altdorfer's engravings share the general characteristics of the Nuremberg school, whose direction was determined by the graphic art of Albrecht Dürer. The earliest ones date between 1506 and 1511, and a larger group belongs to the later years of Altdorfer's life. His graphic work also includes several etchings of landscapes, about 1520, and woodcuts executed mostly between 1511 and 1522 by skilled woodcut artists after his designs.

There is an extensive literature on Altdorfer in German. In English see Emil Waldmann, ed., Albrecht Altdorfer: Catalogue of Engravings and Etchings (1923), and F. W. H. Hollstein, German Engravings, Etchings, and Woodcuts ca. 1400-1700 (1954). For background information see Otto Benesch, The Art of the Renaissance in Northern Europe (1945; rev. ed. 1965).