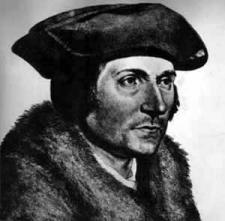 The English playwright Thomas Heywood (c. 1573-1641) worked successfully in a wide range of dramatic forms. A competent craftsman, he lacked the brilliance of the greater Elizabethan and Jacobean dramatists.

Thomas Heywood, in all probability the son of the clergyman Robert Heywood, was born in Lincolnshire. He attended Cambridge but left without a degree when his father died in 1593. He seems to have moved directly from Cambridge to London, where he soon became an actor and playwright. By 1598 he had done enough dramatic writing to impress a contemporary as one of the best comic writers of the time. Unfortunately, none of Heywood's plays from this early period of his career has survived.

Most of Heywood's significant literary activity was done between 1600 and 1620. In 1633, in the preface to his play The English Traveller (probably written about 1623), he claims to have had "either an entire hand, or at the least a main finger" in 220 plays. Because Heywood, like most of his fellow playwrights, had little interest in printing works written for stage production, it is impossible to identify more than a small fraction of this amazing output. The Four Prentices of London (ca. 1600), A Woman Killed with Kindness (1603), and The Rape of Lucrece (1608) are the most important surviving plays which can be assigned with confidence to his pen.

A Woman Killed with Kindness, one of the finest tragedies of the "bourgeois, " or "domestic, " type, is universally regarded as Heywood's masterpiece. Mistress Anne Frankford, a virtuous and happy middle-class wife, unaccountably surrenders her honor to Wendoll, a man whom Master Frankford had befriended and received as a guest in his house. Mistress Frankford's punishment, repentance, and deathbed reconciliation with her husband are skillfully presented. Heywood throughout preserves sympathy for his heroine without relaxing his high moral tone.

Heywood also produced a number of nondramatic works, including translations, poems, and pamphlets on various topics. The most notable of these nondramatic works is the Apology for Actors (ca. 1608; printed 1612), a well-informed response to the criticism frequently leveled against the drama. Like most apologists of the time, Heywood rests his defense on the neoclassic idea that art serves a moral function.

From the mid-1620s on, Heywood devoted himself more and more to nondramatic writing, although in his later years he did produce several lord mayor's pageants. His long and fruitful but unspectacular career came to an end sometime before Aug. 16, 1641, when he was buried in St. James's Church in the Clerkenwell section of London.

Theodore Thomas , Theodore Thomas Theodore Thomas (1835-1905) was one of the fore most American orchestral conductors of his time and the original director of the Chic… Thomas Crawford , Crawford, Thomas Thomas & Betts Corp. , Thomas male forename, and name of several saints. St Thomas an Apostle, known as Doubting Thomas. He earned his nickname by saying that he would not… Isiah Thomas , Thomas, Isiah 1961– Former professional basketball player, entrepreneur To many sports fans and writers, Isiah Thomas was the best small man ever to… Dylan Thomas , The British poet Dylan Marlais Thomas (1914-1953) has been acclaimed as one of the most important poets of the century. His lyrics rank among the mos… Thomas Stanley , Stanley, Thomas (fl. 1429–d. 1462). English mason. He built the tower at Lydd Church, Kent (1442–6), and for some time from at least 1429 was a senio…