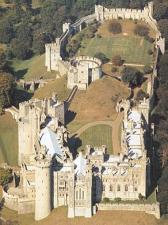 oxford
views updated
Denham, Sir John (1615–69). English poet, courtier, and administrator. He was Surveyor-General of the King's Works (1660–9), with John Webb as his deputy at Greenwich Palace. In 1669 Wren was appointed Denham's sole deputy, and succeeded him on the latter's death two weeks later. Although he does not appear to have designed anything, Denham was probably a competent administrator, and, as the holder of the same position as Inigo Jones and Wren, deserves mention.