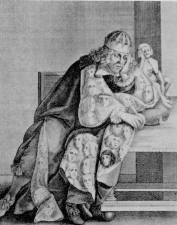 oxford
views updated
Cheke, Sir John (1514–57). Cambridge-born protestant Greek scholar, educator, and man of affairs, Cheke was fellow of St John's College from 1529. As regius professor 1540–51, he was supported by his friends Sir Thomas Smith and Roger Ascham in introducing the new ‘Erasmian’ pronunciation of Greek, against the vice-chancellor's ban. Under Henry VIII, Cheke was tutor to Prince Edward who, as Edward VI, gave him land, a knighthood, and the provostship of King's College, Cambridge; he was also member of Parliament, clerk to the council, and secretary of state. A supporter of Lady Jane Grey, he was imprisoned for treason under Mary 1553–4 but allowed to migrate to Basle, whence he travelled in Italy and taught at Strasbourg before being enticed to Brussels by Mary's agents in 1556 and again imprisoned in London. Securing release by renouncing his religion, he died soon after. Cheke's edition of two sermons by St John Chrysostom, with his Latin translation, was the first text to be printed in England in Greek type (1543). His strongly nationalist feelings in favour of the English language are evident in his gospel translations and his preface to Hoby's translation of Castiglione's Courtier (1561).

Roger Ascham , Ascham, Roger (1515/16–68). Protestant classical scholar and educator, born in Yorkshire. He went up about 1530 to St John's College, Cambridge, whic… Sir John Oldcastle , Oldcastle, Sir John Sir John Oldcastle, 1378?–1417, English leader of Lollardry. He married the heiress of Lord Cobham in 1408 and was known as "the… Sir George Cayley , Cayley, Sir George Sir John Evans , Sir Arthur John Evans, 1851–1941, English archaeologist. He was (1884–1908) keeper of the Ashmolean Museum at Oxford. From 1900 to 1935 he conducted… Royal Society , Royal Society, oldest scientific organization in Great Britain and one of the oldest in Europe. It was founded in 1660 by a group of learned men in L… Sir John Mandeville , Sir John Mandeville is the pen name used by the unidentified 14th-century English author of one of the most famous and widely read travel romances of…