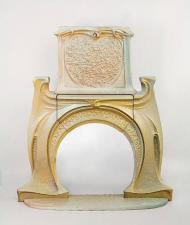 While Hector Guimard's architectural and design works were often scorned during his lifetime and even destroyed in the generations following his death and until the 1960s, he now has become the central emblematic figure for the entire art nouveau movement (a late-nineteenth-century design style characterized by sinuous lines, foliate forms, and a strong influence from the art of Japan), the representative who best characterizes the fleeting era at the end of the nineteenth and the beginning of the twentieth centuries. However, during his lifetime, Guimard was also very sensitive to differentiate his own work, which was often called le style Guimard, from that of the broader implications of art nouveau. In this way, Guimard forged his own identity based upon deeply ingrained principles of what a house or a chair should look like and where all parts in a building could be designed to create an integrated effect.

As Guimard's career as an architect and designer evolved during the 1890s, he was well aware—through his traditional training at the Ècole des Beaux-Arts and through initiatives of the period—that French planners and critics were dedicated to redesigning public and private interior spaces. There was a decided interest in new materials—metal and glass, organic plant motifs—and a growing initiative to move away from the historical styles of past periods. Art and industry were recognized as working together; by the time of the Exposition Universelle of 1900 French government and private initiatives were on display. One point was continually reiterated: architects and designers had to create a "modern style" that did not remain rooted in the past.

As one of the younger architects of the art nouveau era, Guimard focused on a series of issues that were linked to middle-class living. He improved apartments and designed homes that were neither excessively costly nor overly extravagant in terms of a visual impression; he opened up interior spaces so that more light could penetrate, and he utilized new forms that were often standardized through prefabrication, such as the entranceways to the Paris Métro system. Guimard's first fundamentally radical design, the building that established his name and career in the eyes of the public, was the apartment house known as the Castel-Béranger (1894–1898). Here, Guimard achieved some of his goals. He used variegated color effects on sections of the building's facade while the interior courtyard let more light into the individual apartments. But it was Guimard's fusion of various materials throughout the building that demonstrated new ways for architects to work with industry; the effect was to generate considerable discussion in the design community. He soon was recognized as both an architect who advanced practical solutions for housing problems and as an inventor of ornamental designs that were, in effect, more iconoclastic than his architecture. This was especially noticeable in the iron doorway to the Castel-Béranger where by molding the material into a series of whiplash curvilinear motifs he provided a hallmark design for the style Guimard as it stressed abstraction from nature that had not been visualized earlier.

With the construction of buildings, many of which are now destroyed, and the public exhibition of his models and drawings, Guimard soon found himself at the center of critical debate. Those who were linked to the traditions of the academy rejected his ideas; others, those interested in working independently to invent new shapes or to use materials freely, saw Guimard as a visionary. In examining the critical reception of his era, during the 1890s, and just after 1900, Guimard established himself in a new role: he became, in the eyes of many, emblematic of the typical architect-designer. Working alone, Guimard was able to advance a new formalistic language. The Castel-Béranger became a heroic statement where Guimard effectively demonstrated how architecture and the industrial arts could be united in one monument to create a "modern" effect.

Even though Guimard did not participate in the 1900 Exposition Universelle in Paris, his presence was evident in the design of the Métro system, especially through the creation of a wide range of Métro entrances. Paris was somewhat late in building an urban inner-city railroad network—London, Vienna, New York were in advance—but by 1900, with the support of Adrien Benard, and the city of Paris, the Métro system was constructed. Benard, a passionate supporter of art nouveau, was totally dedicated to the idea of having a modern style define the new Paris. By giving Guimard, the new architect-designer, the official responsibility to create entranceways to the Métro system, Benard made him the provocative architect who became the representative of the new era itself. As several variations of Guimard's Métro system were constructed, critics began to dub this so-called new approach le style Métro suggesting that Guimard, in yet another way, was responsible for naming an entire movement that had an immediate, visual impact on the public.

The great variety of Métro entranceways was innovative. Whether Guimard used bulbous vegetal forms open to the sky that supported electric lights or emphasized covered stairways or complete pavilions that used frosted glass or other modern materials the designs were like nothing that had been seen before. A sense of mystery permeated these sites as passengers emerged from the darkness of the underground to be surrounded by vegetal shapes or by shimmering light effects reinforced by reflections off the surface of glass or metal. With so many of these entranceways appearing throughout the city it was clear that "newness" was on everyone's mind. The sad reality is that so few of these entranceways survived a wave of hatred against what was perceived as the art nouveau style.

Although his name was linked with the creation of a truly modern style in 1900, it was not until several years later, when Guimard exhibited his designs at the Exposition Internationale de l'Habitation at the Grand Palais, that the term le style Guimard was first used. It became another name given to those adventurous aspects of architecture and design that were part of art nouveau. At the exposition, Guimard used postcards as a form of self-promotion; he was now becoming a master of self-advancement, presenting himself as the principal architect-designer of the new. He saw himself as an entrepreneurial overseer who directed the work of numerous artisans and craftsmen creating harmonious ensembles of furniture or decorative designs for home interiors. Guimard supported the creation of profoundly original shapes that emphasized the intimate relationship between art industries. By working in so many areas, including the development of new designs for ceramics, Guimard remained a viable member of the modern style until after 1910. Since there were few architects who could follow Guimard's innovations, and many members of the public disliked the style, the art nouveau aesthetic was short lived. It was supplanted by a cleaner, linear style more in keeping with the burgeoning machine age.

oxford
views updated
Guimard, Héctor (1867–1942). French Art Nouveau architect, he was influenced by Viollet-le-Duc and Horta. He designed Castel Béranger, 16 Rue de la Fontaine, Paris (1894–9), an apartment-block of rubble, coloured brick, stone, and faïence, with an entrance in a fully developed Art Nouveau style, causing the building to be christened Castel Dérangé (Mad Castle). His Paris Métro-Station entrances (1899–1913), featuring metal that seemed to grow from the stone, modular prefabricated construction, and bizarre, almost surreal lamps, made his works familiar, although many have been destroyed. The decorations of his own house, the Hôtel Guimard, Avenue Mozart, Paris (1912), perhaps were his most exquisite creations.