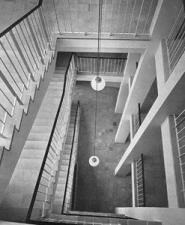 oxford
views updated
Böhm, Dominikus (1880–1955). Born in Jettingen, near Ulm, Böhm was an important C20 architect of churches in Germany. His early designs had references to historical styles, but from the 1920s, although his plans remained conventional, his work contained first Expressionist elements and then abstract Gothic (as in the Freilingsdorf Parish Church, near Cologne (1926–7)). Perhaps one of his best buildings is the Church of St Johann, Neu-Ulm (1921–7), with its banded façade of brick and stone, and squat centrepiece pierced by three pointed arches. He experimented with centralized planning in order to bring the congregation nearer the altar, using an elliptical or circular plan, thus anticipating liturgical changes made in RC worship by the Second Vatican Council (1962–5). Among his other buildings St Engelbert, Köln-Riehl (1930–3), and St Maria-Königin, Köln-Marienburg (1951–4), may be cited. From 1928 his buildings became more Modernist in character, but he fell into disfavour under the Nazis. After 1945 he and his son Gottfried restored damaged churches and built many new ones.

Celtic Church , Celtic Church, name given to the Christian Church of the British Isles before the mission (597) of St. Augustine of Canterbury from Rome. Founded in… Lutheranism , Lutheranism, branch of Protestantism that arose as a result of the Reformation, whose religious faith is based on the principles of Martin Luther, al… Bertram Grosvenor Goodhue , Goodhue, Bertram Grosvenor (1869–1924). American architect. In partnership with Cram from 1892 to 1913, they designed All Saints' Church, Ashmont, MA… John Francis Bentley , Bentley, John Francis (1839–1902). Doncaster-born English architect. He joined the London office of Henry Clutton, working on the Jesuit Church in Fa… Free Church Of Scotland , Free Church of Scotland Free Church of Scotland. This issued from the Disruption of 1843, when those unable to accept the infringements of the Church… George Rice Carpenter , Bähr, Georg (1666–1738). One of the most gifted architects of the Baroque in Germany, he was born in Fürstenwalde, Saxony, and trained as a carpenter…