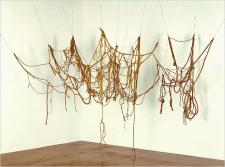 The sculptor Eva Hesse (1936-1970) pioneered the use of plastic and other nontraditional materials in order to visualize her essential concern, the absurdity of relationships within contradictory systems.

Although Eva Hesse worked as a sculptor for only five years before her untimely death at 34 in 1970, she made a significant contribution to contemporary art and aesthetics. Born in Hamburg, Germany, on January 11, 1936, she and her sister Helen escaped the Nazi program via a children's train to Amsterdam in 1938. There Eva was rejoined with her parents and together they travelled to England and then to the United States, arriving in New York City on June 23, 1939. Hesse's father kept a record of these events and continued to document Eva's activities as she grew up in New York. Eva kept diaries as well, and her obsession with autobiography can be found in the strongly personal nature of her work.

The trauma of Hesse's early childhood strongly affected her emotional development, as did her parents' separation and divorce and her mother's subsequent suicide in 1945. These events left Hesse insecure and anxious, and in 1954 she began psychiatric therapy which she maintained throughout her life. This therapy encouraged her to examine herself more closely, and with the help of this intense self-analysis, Hesse created original and innovative sculpture: "I think art is a total thing. A total person giving a contribution. It is an essence, a soul. … In my inner soul, art and life are inseparable."

Interest in Many Styles

Hesse's creative talent had been evident since childhood. At 16 she graduated from the New York School of Industrial Arts. In the fall of 1952 she began studies at the Pratt Institute of Design, but she dropped out in December 1953. She then studied figure drawing at the Art Student's League while she worked as a layout artist for Seventeen magazine. In 1957 she graduated from Cooper Union in New York and then studied at Yale University with the assistance of a Norfolk Fellowship, receiving her B.A. in 1959.

While at Yale Hesse studied color theory with Joseph Albers. During this period she worked as a painter, and her work was heavily influenced by the Abstract Expressionist movement. Most of her work from 1960 to 1965 was abstract, small in size, and intensely personal. Her drawings were strongest. Filled with circular and box-like shapes and reflecting a concern for chaos and order, they anticipated her later sculptural configurations. Hesse's emerging spatial interest was especially evident in the broad overlapping planes of collages she created in 1962 and 1963 with ink, pencil, watercolor, and gouache.

In 1962 Hesse married the sculptor Tom Doyle (they would separate in 1966), and two years later they moved to Ketturg-Am-Ruhr, Germany. There they were guests for a year of the textile manufacturer and collector F. Amhard Scherdt. This visit proved crucial to Hesse's development, as it was during this time that she executed a large body of drawings and created her first sculpture. Her drawings emerged from the gestural and pictographic symbols of the early 1960s to sharply defined flowing contours positioned in a non-atmospheric space. Much of the imagery was inspired by machine parts Hesse had found in an abandoned factory and the large crescent and plough shapes of Doyle's sculpture. These drawings of machine-line forms were often humorous, reminiscent of the "erotic machines" of Francis Picabia or Marcel Duchamp. Hesse was intrigued by the Dada notion of the absurd and later incorporated this attitude into her sculpture: "If I can name the content, then … it's the total absurdity of life. … Absurdity is the key word. It is to do with contradictions and oppositions. … I was always aware that I should take order versus chaos, stringy versus mass, huge versus small and I would try to find the most absurd opposites or extreme opposites."

While Hesse enjoyed drawing, she found it difficult to translate her ideas into paintings. Slowly, she began to explore three-dimensional form, first in relief and then in sculpture. Ring Around Arosie (1965), a bright pink breastlike projection made of paper mache, cloth, and wire on a masonite panel, alludes to the sexual nature of much of her early relief works and points to Hesse's concern for exploring the self in terms of the female experience. At the same time, the artist intentionally broke down conventions, using non-traditional materials such as plastic and industrial wire, in her quest to explore a personal vision: "My idea now is to counteract everything I've ever learnt or been taught about those things—to find something inevitable that is my life, my thought, my feelings." Hesse exhibited many of these reliefs, along with her "machine" drawings, at the Kunsthalle in Dusseldorf, Germany, in August 1965.

When Hesse returned to New York the next month, she was filled with a new sense of confidence gained from 15 months abroad. Soon she began exploring, through sculpture, the emotional terrain of her experience. Hang-Up (1966) alludes to her desire to move off the canvas into space: here, a curved metal rod springs from a latex and cheesecloth bound rectangular frame. With one image, Hesse dissolved the boundaries between drawing, painting, and sculpture. Many of the works of this 1966-1968 period contain rectangular box and grid forms or circular spherical shapes, reductive structures and systems also found in the work of her friends, the sculptors Sol LeWitt, Mel Boucher, and Carl Andre.

Metronomic Irregularity I (1966) and Addendum (1967) employ logical arrangement to create random results. In these works Hesse stated directly her essential concern for inter-relating contradictory systems: order and chaos, logic and absurdity, the geometric and organic. Her grid drawings of this time also interface a regular repeated module with the individual variation of her markings in each unit.

A Restless Search for Expression

Constantly experimenting with new processes and materials, Hesse began in 1967 to use latex and fiberglass to build up forms layer by layer or to cover found objects. These transparent, translucent plastic mediums captured light and color and enabled the artist to broaden the vocabulary of her forms. Expanded Expansion (1969) is typical of this period.

From 1968 to 1970 Hesse exhibited many of these sculptures at the Fishbach Gallery, directed by her dealer and friend Donald Droll. During this time she also taught at the School of Visual Arts. Her work was included in group exhibits at the Art Institute in Milwaukee, Kunsthalle, Berne, and the Whitney and Museum of Modern Art in New York.

Hesse's "window" gouaches of 1968-1969 point to the constant interaction between her drawings and her sculpture. In this series, like the fiberglass layers of her sculpture, saturated colors are built up by thin washes of color. Hesse was always aware of the ironic interplay between two-dimensional and three-dimensional form. Contingent, executed the summer of 1969, addresses this concern. Eight parallel banner-like elements hang from the ceiling to the floor. Suspended within each panel is a large rectangular stretch of latex and fiberglass covered cheesecloth. From the front, Contingent looks like a layered abstract painting or one of her "window" gouaches, while from the side it expands into space. The thin sheets of organic material move with the wind and deny any sense of the solidity usually associated with sculpture. Color and light dance among the panels, creating a poetic and meditative feeling from raw matter.

Although Hesse died before the feminist movement of the 1970s, she imbued her sculpture with values associated with the female experience. Her work emphasized the intuitive and self-reflective; it sought to temper the intellectual with feeling and to undermine monumentality with intimate and personal forms.

Untitled, completed shortly before her death of brain cancer in May 1970, suggested a new direction for Hesse's work. Here a system of knotted ropes is suspended from the ceiling, the connection of elements determining its final shape. This sculpture has no plan or actual form—only relationships suspended in space waiting for the observer to give them definition and meaning. Rejecting the idea of a singular style, Hesse made her own definition: "… howto achieve by not achieving? How to make by not making? it's all in that./it's not new. it's what is not yet known, thought seen touched—but really what is not, and that is."

The most complete and informative text on Hesse remains Lucy R. Lippard, Eva Hesse (1976). On Hesse's drawings, see Ellen H. Johnson, Eva Hesse: A Retrospective of the Drawings (1980). Her last interview was published the month of her death: Cindy Nemser, "An Interview with Eva Hesse, " Art Forum, VII (May 1970).