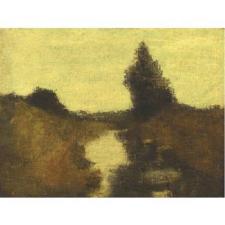 The painter Albert Pinkham Ryder (1847-1917) was the most original romantic artist of 19th-century America. His highly personal art, at the opposite extreme from the literal naturalism of his period, anticipated the expressionist and fantastic trends of modern art.

Albert P. Ryder was born on March 19, 1847, in New Bedford, Mass., then the world's busiest whaling port. His ancestors on both his father's and mother's sides were of old Cape Cod families. Many had been sailors, and his childhood was intimately associated with the sea. His education went no further than grammar school, as his eyes were oversensitive. Without professional training he began to paint landscape outdoors.

About 1870 Ryder moved with his family to New York, where he lived the rest of his life. At 23 (relatively late) he entered the National Academy of Design, where he studied for four seasons, mostly drawing from casts; but more important was the informal teaching he received from the portraitist and romantic painter William E. Marshall. This limited art education contrasted with the thorough academic training usual at the time.

Ryder's early paintings were landscapes, often including horses, cows, and sheep—memories of the country around New Bedford. Small in scale and relatively naturalistic in style, they were already marked by a dreamlike poetry and by extremely personal form and color. They were generally rejected by academy juries, and in 1877 Ryder was one of the founders of a new liberal organization, the Society of American Artists, with which he exhibited for the next decade.

By contrast with that of most American artists of his generation, Ryder's European experience was small. His first trip abroad was in 1877, when he spent a month in London. The next and longest trip was in the summer of 1882, when he visited France, Spain, Tangier, Italy, and Switzerland. In 1887 and 1896 he crossed and recrossed the Atlantic, for the sea voyages, spending only 2 weeks in London each time. These limited foreign contacts had little effect on his art.

About 1880, in his early 30s, Ryder embarked on the imaginative paintings which were his greatest achievements. They were based on the Bible, classical mythology, Chaucer, Shakespeare (his favorite poet), and 19th-century romantics such as Lord Byron, Thomas Campbell, Alfred Lord Tennyson, and Edgar Allan Poe. Two of his major paintings were based on Richard Wagner's operas. But Ryder's works were quite different from the "literary" pictures of the period. They were not illustrations but original works of art—great themes transformed by his imagination into highly personal visions. Nature always played an essential part. Youthful memories of the sea were embodied in his frequent image of a lone boat sailing the moonlit waters. But his major conceptions were more than simple nature poems; their central motif was the human being in relation to superhuman powers. Ryder's art was fundamentally religious; he was one of the few artists of his time to whom religion was not mere conformity but intense, profound belief.

Ryder's art was never bound by the literal naturalism of his time. For him painting was not mere representation but creation in the language of color, form, and rhythmic movement. As he said, "What avails a storm cloud accurate in form and color if the storm is not therein?" He used the elements of nature far more freely than any American contemporary painter, shaping them to his creative sense of design.

Ryder worked long over his pictures, building them in layer on layer of pigment, often keeping them for years, so that his total production numbers only about 165 paintings. Unfortunately he had no sound technical knowledge, and many of his pictures have deteriorated to some extent. Because of the small number of his works and their increasing value, forgeries began to appear in his last years; and after his death the production increased until there are now about five times as many fakes as genuine works.

As a person, Ryder was completely unworldly. He cared nothing for money or reputation. As he said, "The artist needs but a roof, a crust of bread and his easel, and all the rest God gives him in abundance. He must live to paint and not paint to live." He never married, and in later life he became a recluse except to a few old friends. He was utterly unable to cope with housekeeping, and the two rooms in which he lived were in a condition of incredible disorder, piled waist-high with all kinds of objects. After a serious illness in 1915, he lived with friends in Elmhurst, Long Island, where he died on March 28, 1917.

Though Ryder's art had little to do with the prevailing trends of his day, it had much to do with future trends. His freedom from literal naturalism, his relation to the subconscious mind, and the purity of his plastic creation were prophetic of much in modern art.

Washington Allston , Washington Allston Washington Allston America's first important painter of the romantic movement, Washington Allston (1779-1843) created landscapes,… Frank Kupka , Frantisek Kupka (1871-1957) was a Czech painter and illustrator who lived most of his life in Paris. He was one of the first artists to paint abstrac… Horace Pippin , Pippin, Horace 1888–1946 Painter The most celebrated African American painter of his time and one of the greatest of any period, Horace Pippin had an… Gerhard Richter , Gerhard Richter German artist Gerhard Richter (born 1932) is considered one of the most significant and challenging artists of the last quarter-centu… Painting , painting, direct application of pigment to a surface to produce by tones of color or of light and dark some representation or decorative arrangement… Henry Ossawa Tanner , Tanner, Henry Ossawa 1859-1937 Painter, photographer At the beginning of the twentieth century, Henry Ossawa Tanner was highly regarded in Europe and…