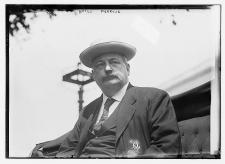 Boies Penrose was born in Philadelphia on Nov. 1, 1860, of a distinguished family with a tradition of public service. Consistent with his family's social position, he attended Harvard, graduating second in the class of 1881. His commencement oration, on Martin Van Buren as a political leader, foreshadowed his career choice. Although he returned to Philadelphia after graduation and entered law practice, his life interest was politics and government rather than the legal profession. Even as a practicing lawyer, he collaborated on a scholarly study, The City Government of Philadelphia (1887).

During the 1880s Penrose showed some affinity for an independent, reform approach to politics, but he soon decided that his ambition for political office would be advanced more readily through the Republican state organization. He became the protégé and lieutenant of the machine's leader, Matthew Quay, and was elected to the state legislature of 1885 and the senate from 1886 to 1897, serving as president pro tem of the latter body after 1890. With Quay's backing, he was elected to the U.S. Senate in 1897.

In both state and national politics, Penrose took a conservative line. In the Senate, where he served from 1897 until his death, he was a mainstay of the Old Guard resistance to progressivism, following the lead of Nelson W. Aldrich, whom he succeeded as chairman of the influential Senate Finance Committee in 1911. His legislative efforts were mainly on behalf of higher tariff rates. On the state level, Penrose became the leader of the Pennsylvania Republican organization upon Quay's death in 1903. An opponent of most reform ideas (except for the direct primary), Penrose represented Pennsylvania on the Republican National Committee from 1904 until 1912. He was temporarily displaced, but when the Progressives' power weakened, Penrose regained control of the state party and dominated it from 1916 until he died in Washington, D.C., on Dec. 31, 1921.

Although known as a party boss, Penrose avoided the graft that marred the records of many such men of his time. He was at his best working behind the scenes through committees and private conferences, but he was a forceful and intelligent speaker who could command public support and was twice elected senator by popular vote. Quick-witted, cynical, and aloof, he devoted himself to leading the Republican state organization and defending corporate interests, thus leaving behind a record of successful pursuit of power but virtually no legacy of idealism or statesmanship.

There is no modern scholarly biography of Penrose. Regrettably, both Walter Davenport, Power and Glory: The Life of Boies Penrose (1931), and Robert Douglas Bowden, Boies Penrose: Symbol of an Era (1937), are superficial appraisals of Penrose's career. □

Roscoe Conkling , Conkling, Roscoe CONKLING, ROSCOE Roscoe Conkling was for many years in the late nineteenth century the most powerful politician in the most powerful… Benjamin Harrison (us President) , Harrison, Benjamin Benjamin Harrison THE presidency of Benjamin Harrison attests that the office requires a breadth of personal qualities and politic… Congress Of The United States , Congress The federal House and Senate developed in parallel but distinct ways. That was a function of their innate institutional differences and of t… Albert Jeremiah Beveridge , When he entered the U.S. Senate in 1899 at age 36, Albert Jeremiah Beveridge (1862-1927) was hailed as one of America's most influential young leader… Hiram Leong Fong , The son of immigrant plantation laborers, Hiram L. Fong (born 1907) became a self-made millionaire and the first person of Chinese descent to serve i… Wayne Lyman Morse , MORSE, Wayne Lyman (b. 20 October 1900 near Madison, Wisconsin; d. 22 July 1974 in Portland, Oregon), author, educator, and United States senator fro…