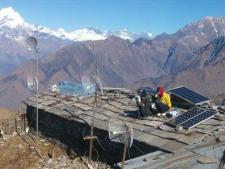 Ramon Magsaysay (1907-1957) was the third Philippine president. Credited with restoring peace, law, and order during the Philippine crisis of the 1950s and the Hukbalahap rebellion, he was the first Philippine president from the landless lower middle class, the petit bourgeois stratum of society.

Ramon Magsaysay was born in Iba, Zambales, on Aug. 31, 1907, to Exequiel Magsaysay, a blacksmith, and Perfecta del Fierro, a schoolteacher. He entered the University of the Philippines in 1927. He worked as a chauffeur to support himself as he studied engineering; later, he transferred to the Institute of Commerce at José Rizal College (1928-1932), where he received a baccalaureate in commerce. He then worked as automobile mechanic and shop superintendent. When World War II broke out, he joined the motor pool of the 31st Infantry Division of the Philippine army.

When Bataan surrendered in 1942, Magsaysay escaped to the hills, organized the Western Luzon Guerrilla Forces, and was commissioned captain on April 5, 1942. For 3 years Capt. Magsaysay operated under Col. Merrill's famed guerrilla outfit and saw action at Sawang, San Marcelino, Zambales. Magsaysay was among those instrumental in clearing the Zambales coast of the Japanese prior to the landing of American liberation forces on Jan. 29, 1945.

After the war Magsaysay was appointed by the U. S. Army as military governor of Zambales on Feb. 4, 1945. On Feb. 8, 1946, Maj. Magsaysay was discharged from the army. He was elected representative of Zambales on April 23, 1946, and reelected in November 1949 under the banner of the Liberal party.

In Congress, Magsaysay served as chairman of the House Committee on National Defense and belonged to numerous other committees. In April 1948 President Manuel Roxas appointed Magsaysay to head a veterans' mission to Washington which lobbied for the passage of the Rogers bill. In 1950 Magsaysay attacked the Liberal party-dominated administration for corruption and called for reforms of the deplorable social conditions which had produced the Hukbalahap rebellion (the rebels were peasants fighting for democratic rights, equality, and justice). Time (Nov. 26, 1951) reported that "when politicians kept him from buying Quonset huts he needed as schoolhouses for Zambales, he gathered some of his wartime guerillas, raided a surplus dump, and made off with 140 huts. Later he paid for them—50 centavos (25 cents) apiece, the price he figured the profiteer who owned them had paid in the first place." Prompted by his American advisers, President Elpidio Quirino appointed Magsaysay secretary of national defense on Sept. 1, 1950.

From 1950 to 1953 Magsaysay revitalized the army with vast American aid; the army had been demoralized, politics-ridden, and virtually defeated by the mass revolution under way. Within 83 days Magsaysay retired three generals, discharged and demoted many erring and inefficient officers, and gave the 18,000 enlisted men better food, quarters, and pay. He also reorganized the vicious Philippine Constabulary and created the Scout Ranger Battalions, whom he commanded to "kill Huks." Magsaysay sent civilian officers to the barrios to propagandize in support of the government. He gathered $500,000 from the oligarchic ruling class—the big landlords, compradors, and bureaucrat-capitalists—to pay as reward for any information leading to the capture of the Huk leaders. This policy led to the arrest and conviction of 29 top leaders of the People's Liberation Army and 6 members of the Politburo of the Communist party of the Philippines. Labor leaders, professors, diplomats, and many other innocent citizens were arrested and deprived of their right to due process of law under a repressive martial law.

As head of the Defense Department, Magsaysay encouraged Huk surrenders by offering medical treatment, parole, and homesteads in the Mindanao jungle. The Economic Development Corps, an agency of the government, then built farmhouses, schools, hospitals, and other facilities in Mindanao under Magsaysay's initiative. He also tried to rehabilitate the Huks by offering vocational training and loans to aid in establishing small businesses. From a later perspective, these measures (including anti-Communist indoctrination) had practically no result; the reestablished Communist party (Marxist-Leninist) reoccupied and liberated large areas of central Luzon and rapidly gained ground in other parts of the country.

In November 1951 Magsaysay sought to keep the elections clean by employing his 40,000-man army and 5,500 reserves to police the land. The opposition Nacionalista party won a decisive victory against the ruling Liberals. In the summer of 1952 Magsaysay was also responsible for the military solution to the protesting Moslems, who had been victims of Christian chauvinism, land-grabbers, and government malfeasance. Magsaysay also sent forces to fight under the United Nations command in Korea.

Accession to the Presidency

For his reputation of energy and honesty, Magsaysay was idolized by the electorate, which voted him to succeed Quirino. Magsaysay had earlier resigned from the Liberal party and was subsequently chosen candidate for president by the Nacionalista party. On Nov. 10, 1953, Magsaysay won by a landslide victory.

During Magsaysay's term the Huk leader Taruc surrendered. In 1954 Magsaysay's government renegotiated the iniquitous Bell Trade Act of 1946 into the Laurel-Langley Agreement, which maintained the economic subservience of the nation to United States monopolies. The peso currency, controlled by the United States dollar, declined in value. Magsaysay also signed the first Agricultural Commodities Agreement with the United States in 1957, thus perpetuating the colonial pattern of the nation's economy, and was also responsible for the passage of the Anti-subversion Law, which curtailed the citizens' democratic rights of assembly, free speech, and belief.

In line with his position as America's "staunch friend in Asia," Magsaysay was the chief sponsor in forming the Southeast Asia Treaty Organization (SEATO). He was killed in a plane crash on March 17, 1957.

Carlos P. Romulo and Marvin M. Gray, The Magsaysay Story (1956), is a full-length biography. A more specialized study is Frances Lucille Starner, Magsaysay and the Philippine Peasantry: The Agrarian Impact on Philippine Politics, 1953-1956 (1961). Reliable information on Magsaysay is in Eufronio Melo Alip, ed., The Philippine Presidents from Aguinaldo to Garcia (1958); Teodoro A. Agoncillo and Oscar M. Alfonso, History of the Filipino People (1960; rev. ed. 1967); Jésus V. Merritt, Our Presidents: Profiles in History (1962); Hernando J. Abaya, The Untold Philippine Story (1967); and Pedro A. Gagelonia, Presidents All (1967).