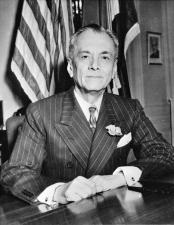 Manuel Luis Quezon (1878-1944) was the first president of the Commonwealth of the Philippines. He prepared the groundwork for Philippine independence in 1946.

Manuel Quezon was born on Aug. 19, 1878, to Lucio Quezon and Maria Molina, both schoolteachers, in Baler, Tayabas (now Quezon) Province, in Luzon. Manuel enrolled at San Juan de Letran College, after which he was appointed lecturer at the University of Santo Tomás. There he studied law, but his studies were interrupted by the outbreak of the Spanish-American War.

Quezon was considered "bright but lazy"; but when he joined the revolutionary forces of Gen. Emilio Aguinaldo during the revolution against Spain, Quezon displayed his fearless, bold, and quick-tempered style of fighting. He was promoted from private to major until, in 1899, he surrendered to the Americans, spent 6 months in jail, and then returned to Manila.

In 1903 Quezon passed the bar examination and set up practice in Baler. He gave up private practice to assume the post of provincial fiscal of Mindoro and later of Tayabas. In 1906 he was elected provincial governor. His campaign showed his native political wisdom when he sided with popular issues in a somewhat opportunistic manner. Often he abandoned consistency for the sake of pursuing what to his enemies was nothing but plain demagoguery.

In 1907 Quezon ran successfully as candidate for the Philippine Assembly on the Nacionalista party platform. In the Assembly he was elected floor leader, and Sergio Osmeña, his archrival, became Speaker of the House. Quezon served as resident commissioner in Washington, D. C. (1909-1916), where he became notorious as a romantic dancer, playboy diplomat, and shrewd lobbyist. He was instrumental in having a law revised so that Filipinos would form a majority in the Philippine Commission, the highest governing body in the Philippines. In February 1916 he cosponsored the Jones Act, which gave the Filipinos the power to legislate for themselves subject to veto by the American governor general. With this act, Quezon returned home a hero.

In 1916 Quezon was elected to the Senate, and soon became its president. Here he began attacking Osmeña for the latter's theory of "unipersonal" leadership. Quezon's "collectivist" idea of leadership won in the 1922 election. Soon, however, the two warring factions of the Nacionalista party united in the Partido Nacionalista Consolidado, headed by Quezon, who then became president of the party.

In 1933 a bill providing for the future independence of the Philippines, the Hare-Hawes-Cutting Bill, was passed by the U.S. Senate. Quezon opposed the new law because "America would still hold military and naval bases in the Philippines even after the latter's independence, and, moreover, export duties regulated in the law would destroy both industry and trade." He was referring to what has since become the most troublesome cause of conflict between the Philippines and the United States: the right of jurisdiction over military bases and the special trade concessions given to landlords, compradors, and bureaucrat-capitalists with interests in export industries.

The real cause of Quezon's opposition to the law, apart from his objection to specific provisions, was the fact that it was identified with the Osmeña faction. Quezon led a mission to the United States to work for a bill generally similar to the Hare-Hawes-Cutting Law, the Tydings-McDuffie Law, known also as the Philippine Independence Act. This law provided for Philippine independence in 1946 and tax-free importation of Philippine products such as sugar, coconut oil, and cordage into the United States and the diplomatic negotiation of the military bases issue.

President of the Philippines

In September 1935, under the banner of a coalition party, Quezon was elected first president of the commonwealth, with Osmeña as vice president. Quezon's first act as chief executive was to push a national defense bill through the rubber-stamp unicameral legislature, which he controlled. This bill made him chairman of the Council for National Defense, with the chief of staff of the armed forces directly subordinate to him.

On Aug. 10, 1940, influenced by the growing Japanese imperialist encroachment, Quezon jammed through the National Assembly the Emergency Powers Bill, which vested him with dictatorial powers. Passed by a vote of 62 to 1, the bill gave Quezon the authority to change even the social and economic structure of the country: he was given the authority to require civilians to render service to the government, to outlaw strikes, to commandeer shipping and other transportation, to control fuel resources, to revise the educational system, and so forth.

In November 1941 Quezon was reelected president of the commonwealth. When the Japanese forces occupied Manila in 1942, Quezon and his Cabinet fled from the Philippines and set up an exile government in Washington in May 1942. Quezon died on Aug. 1, 1944, a year before the liberation of the Philippines.

Although Quezon lived through the most turbulent times in Philippine history, when the peasantry—who composed 75 percent of the people—was rebelling against social injustice and age-old exploitation, he failed to institute long-lasting reforms in land tenancy, wages, income distribution, and other areas of crisis. Essentially a politician who was both tactful and bullheaded, supple and compulsive, Quezon served mainly the interest of the Filipino elite, or ruling oligarchy (about 200 families), who owned and controlled the estates and businesses.

Quezon became a popular hero when he attacked the racist policies of Governor Leonard Wood with his declaration that he preferred "a government run like hell by Filipinos to one run like heaven by Americans." Senator Claro M. Recto, a contemporary, pronounced the most balanced and acute judgment when he described Quezon as "a successful politician … because he was a master of political intrigue. He knew how to build strong and loyal friendships even among political opponents, but he knew also how to excite envy, distrust, ambition, jealousy, even among his own loyal followers."

The most authoritative source on Quezon's life is his autobiography, The Good Fight (1946). For his career and the historical circumstances surrounding it, the following are standard references: Carlos Quirino, Quezon: Man of Destiny (1935); Joseph R. Hayden, The Philippines: A Study in National Development (1942); Teodoro A. Agoncillo and Oscar M. Alfonso, History of the Filipino People (1960; rev. ed. 1967); Theodore Friend, Between Two Empires: The Ordeal of the Philippines, 1929-46 (1965); and Teodoro A. Agoncillo, A Short History of the Philippines (1969).

Quezon: thoughts and anecdotes about him and his fights, Quezon City?: J.F. Rivera, 1979.

oxford
views updated
Quezon, Manuel Luis (1878–1944) Philippine statesman, first president of the Commonwealth of the Philippines (1935–44). Quezon was imprisoned for his part in the revolt against US rule in 1901. After his release, he became leader of the Nationalist Party and, as commissioner to the US (1909–16), secured the passage of the Tydings-McDuffie Bill (1934) that paved the way for independence. An autocratic president, Quezon instigated administrative reforms. His strengthening of Philippine defences failed to prevent Japan's invasion, and Quezon formed a govenment-in-exile in the US.

James Monroe , James Monroe Harry Ammon INAUGURATION day, 4 March 1817, was one of those rare late winter days in Washington with more than a hint of spring—sunny a… Calvin Coolidge , John Calvin Coolidge (1872-1933) was the thirtieth president of the United States. He has become symbolic of the smug and self-satisfied conservatism… Getulio Dornelles Vargas , Getulio Dornelles Vargas Getulio Dornelles Vargas Getulio Dornelles Vargas (1883-1954), certainly the most important Brazilian political leader of th… Jimmy Carter , Carter, Jimmy Richard S. Kirkendall JIMMY CARTER was an unlucky president. He came to power shortly after the American failure in Vietnam and the Wat… Tomas Estrada Palma , The Cuban statesman Tomás Estrada Palma (1835-1908) first served as president of the provisional government during Cuba's War for Independence and th… William Mckinley , William McKinley Paul W. Glad ONE of the most beloved of American presidents, William McKinley served as the nation's chief executive during a time w…