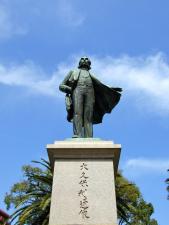 Toshimichi Okubo (1830-1878) was one of the leaders of the Meiji restoration in Japan and perhaps the dominant figure in the new government in its early years. He played a key role in the consolidation of the government.

Toshimichi Okubo was born on Aug. 10, 1830, in Kagoshima, the castle town of Satsuma, a feudal domain in southern Kyushu. He was the eldest son of a lower-ranking samurai family. After attending the domain's academy, he began his career as a minor official. Because he strongly advocated a policy of internal reform and Westernization within Satsuma, he soon became a confidant of its lord, Nariakira Shimazu. As a central figure in the domain government during the early 1860s, Okubo advocated the moderate policy of union between court and shogunate, which stressed the need to share decisions on national policies between the two.

Beginning in 1865, at the time of the shogunate's expedition against the domain of Choshu, Okubo began to work for alliance of his own domain with Choshu. In 1866 he also established close ties with Tomomi Iwakura, a leader of the loyalist faction at the imperial court. In late 1867, after reaching an agreement with representatives from Choshu, Okubo helped plan the coup d'etat which overthrew the power of the shogun and restored the Meiji emperor to full executive authority.

Leader of the Restoration

From the time of the restoration until his death, Okubo was a key leader in the new imperial government. He played an important role in maintaining the alliance between Satsuma and Choshu men and helped bring about the centralization of the government through the abolition of the feudal domains and the establishment of a prefectural system.

In 1873, after returning from the West as a member of the Iwakura mission, he helped to lead the opposition to the expedition against Korea proposed by Takamori Saigo and others. He argued that such a policy was too rash for a weak country like Japan, that it would invite the wrath of the Western powers, and that first priority should be placed on internal reform and consolidation. Although his view prevailed, he did attempt to placate the opposition by the dispatch of an expedition against Taiwanese aborigines in 1874, and he went to China to negotiate a settlement of the affair which gave the Japanese sovereignty over the Ryukyu Islands.

As the minister of home affairs from 1873 to 1878, Okubo steered the government in the direction it was to pursue over the next decade or so. He promoted a policy of rapid, state-sponsored industrialization through the importation of Western technology, the establishment of pilot-plant operations, and government subsidies to key businesses. He also moved vigorously against domestic opposition movements, personally directing the suppression of the Saga revolt in 1874 and the Satsuma rebellion of 1876-1877. At the same time, in 1875 he was careful to maintain the balance of power between men from Satsuma and Choshu within the government and helped initiate efforts toward the establishment of a constitutional system. Equally important was his assiduous effort to recruit bright and talented young men into the government, regardless of their domain origin.

To many, Okubo symbolized the ruthlessness and speed with which the new imperial government had moved. On May 14, 1878, he was assassinated by a disgruntled former samurai from Kaga domain while on his way to the imperial palace. Stern, humorless, and autocratic in temperament, he represented both the best and worst sides of the bureaucratic elite that dominated the formation of modern Japan.

The only English-language biography of Okubo is Masakazu Iwata, Okubo Toshimichi: The Bismarck of Japan (1964). It is based on research in Japanese materials and is one of the few scholarly works about a member of the Meiji oligarchy. Further background can be found in Hugh Borton, Japan's Modern Century (1955); Ryusaku Tsunoda, William Theodore de Bary, and Donald Keene, Sources of the Japanese Tradition (1958); George M. Beckmann, The Modernization of China and Japan (1962); John K. Fairbank, Edwin O. Reischauer, and Albert M. Craig, East Asia: The Modern Transformation (1965); and Chitoshi Yanaga, Japan since Perry (1966). □

Okuma Shigenobu , Shigenobu Okuma Shigenobu Okuma The Japanese statesman and politician Shigenobu Okuma (1838-1922) was one of the early leaders of the Meiji governmen… Relations With Japan , Japan, Relations with JAPAN, RELATIONS WITH. Relations between Japan and the United States have been a complex mix of cooperation, competition, and c… Meiji Restoration , Meiji restoration, The term refers to both the events of 1868 that led to the "restoration" of power to the emperor and the entire period of revoluti… Hirohito , Hirohito Hirohito [Image not available for copyright reasons] Tokyo, Japan Died January 7, 1989 Tokyo, Japan 124th emperor of Japan Hirohito's reign… Takamori Saigo , The Japanese rebel and statesman Takamori Saigo (1827-1877) was the military leader of the Meiji restoration. His eventual revolt against the Meiji g… Tomomi Iwakura , The Japanese statesman Tomomi Iwakura (1825-1883) played a key role in bringing about the Meiji restoration of 1868 and is best known as the leader o…