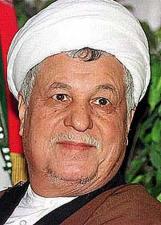 oxford
views updated
Rafsanjani, (Ali Akbar) Hashemi (1934– ) Iranian statesman and cleric, president of Iran (1989–97). After Ayatollah Khomeini's triumphant return in 1979, Rafsanjani became speaker of the Iranian parliament. A leading figure in the new theocracy, he was acting commander of the armed forces in the final stages of the Iran-Iraq War. Following Khomeini's death in 1989, Rafsanjani became president. His presidency witnessed a slight easing of tension in relations with the West.

College Administration , Presidency, College and University The chief executive officer of an institution of higher education in the United States is commonly known as presid… Jose Maria Velasco Ibarra , The Ecuadorian lawyer and statesman José María Velasco Ibarra (1893-1979) was five times president of the republic and Ecuador's outstanding politica… Benigno Aquino , Aquino, Benigno Born: November 27, 1932 Tarlac Province, Luzon, Philippines Manila, Philippines Filipino politician Benigno Aquino of the Philippines… Fructuoso Rivera , Fructuoso Rivera Fructuoso Rivera (ca. 1788-1854) was the first president of Uruguay. Better known for his military spirit and leadership than for hi… Watergate Affair , On the evening of June 16, 1972, a security guard at the Watergate Hotel in Washington, D.C., discovered a piece of tape on the lock of the door that… Juan Jose Flores , Juan José Flores Juan José Flores Juan José Flores (1801-1864) was a South American general and the first president of Ecuador. He dominated Ecuadori…