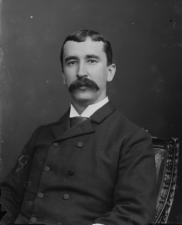 As a historian and teacher, Herbert Baxter Adams (1850-1901) was important in establishing the professional study of history in American universities.

Herbert Baxter Adams was born in Shutesburg, Mass., on April 16, 1850. He entered Amherst College in 1868 and initially showed interest in journalism, editing the college newspaper and occasionally reporting for papers in Amherst, Boston, and New York. However, according to Adams himself, hearing one lecture during his senior year changed his mind and made him decide to study history.

After graduation Adams taught for one year, but he knew that the pursuit of his goal required foreign study, and so in 1874 he left for Heidelberg and Berlin. He received his doctorate from Heidelberg in 1876, having already accepted a position at the newly established Johns Hopkins University, where he would remain until his death. It is not coincidental that Adams began his career at the same time that Johns Hopkins opened its doors, for the educational goals of the man and the institution were identical. The university was to be a research institution where graduate-level instruction using the seminar method would be available for advanced students. Adams, with his German training, was determined to inaugurate through the seminar system the scientific study of history based on careful, critical examination of the sources. He hoped to make the study of history an independent professional pursuit rather than a mere branch of literature.

In 1881 Adams was put in charge of the Historical Seminary, the institution for the training of advanced students, in which he supervised several men who were to become famous historians. In 1882 he issued the first number of the Johns Hopkins University Studies in Historical and Political Science, which he founded so that scholars at the university could publish the results of their research. He continued as editor for 18 years.

As a historian, Adams specialized in the study of local political institutions of America's colonial period. He tried to show the derivation of these institutions from German and English models—an approach usually called the "germ theory" of American politics. His primary role, however, was as a teacher, editor, and organizer. After 1883 he did not publish any of his own scholarly work in history except for a biography of the American historian Jared Sparks in 1893. After 1884 he was secretary of the American Historical Association, of which he was the leading founder and the effective executive head until declining health forced him to resign in 1900. He died on July 30, 1901.

Adams's career may be traced in W. Stull Holt, ed., Historical Scholarship in the United States, 1876-1901: As Revealed in the Correspondence of Herbert B. Adams (1938). John Martin Vincent's essay in Howard W. Odum, ed., American Masters of Social Science (1927), is more directly biographical, but it does not reveal as clearly Adams's contributions to the historical profession. John Higham and others, History (1965), places Adams in historical context. □