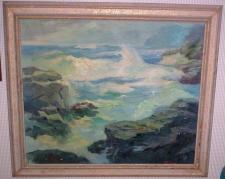 The American journalist Harry Scott Ashmore (born 1916) was the 1958 Pulitzer Prize winner for his reports and commentary on the Little Rock, Arkansas, school integration crisis.

Harry Ashmore was born July 28, 1916, in Greenville, South Carolina, in the northwest part of the state. His father, William Green Ashmore, was a merchant, and the Ashmore traced their lineage in Greenville County to the colonial period of American history. Harry's mother, Elizabeth Scott Ashmore, came from Scotch-Irish roots that began in America with her father's migration from County Antrim, Ireland. The Scotts were strong Presbyterians, but Elizabeth relented to the Baptist loyalties of the Ashmores.

Harry recalled in his boyhood a region marked by numerous textile mills that made it emblematic of the "New South" and its industrial character. Nonetheless, the people of the area were highly partisan in their Old South prejudices. Ashmore remembered that his relatives considered white supremacy a "fact of life" and the social dominance of whites over Blacks as the "natural order" of society. Both of Ashmore's grandmothers related with pride their husbands' military service in the armies of the Confederacy.

Ashmore graduated from Clemson College in 1937 and began a career in journalism. His work on the Greenville Piedmont included an assignment to study living conditions of the poor in northern cities, a report that his editor hoped would retaliate against northern journalists' exposés of wretched conditions in the Greenville area textile mills. Ashmore's investigation of New York City drew a notice in TIME magazine and won a measure of vindication for the South, but Ashmore later regretted that the effect was to make the South indifferent to the social evils in its midst.

In 1940 Ashmore married Barbara Edith Laier, a New Englander who was teaching at Furman University. The couple had one child, a daughter Anne. The next year Ashmore attended Harvard University as a Nieman Fellow and focused his studies on American history, primarily with Professors Paul H. Buck, Frederick Merk, and Arthur Schlesinger, Sr. Ashmore then saw extensive military service in World War II, fighting with George S. Patton's Third Army and winning decorations for his achievements.

After his return home, Ashmore became editor of the editorial page of the Charlotte (N.C.) News, a job that he accepted in part because his work on the Greenville paper had alienated the reigning Bourbon politicians in the state. At Charlotte, Ashmore succeeded Wilbur J. Cash, a brilliant writer whose deflation of the South's sentimental mythology in his classic The Mind of the South greatly influenced Ashmore.

In 1947 Ashmore joined the Arkansas Gazette, a venerable Little Rock newspaper of longstanding Democratic party loyalties. He had by this time become a familiar name as part of a small group of Southern liberal journalists that included his good friends Harry Golden and Ralph McGill. As editor of the editorial page, Ashmore turned the Gazette against the segregationist movement in the Democratic Party led by Strom Thurmond of South Carolina and known as the "Dixiecrat" schism of 1948. Ashmore, always a voice of restraint, had initiated reforms in the Gazette that called for consistent courtesy titles ("Mr., "Mrs.," and "Miss") for both African-American and white people. Ashmore also headed a team of scholars, organized by the Ford Foundation's Fund for the Advancement of Education, to study race and the public schools in the South. The Negro and the Public Schools was published one day before the United States Supreme Court issued its historic desegregation decision in Brown vs. Board of Education in 1954.

That decision raised a defiant South, with campaigns for massive resistance to court-ordered school integration. Ashmore at the Gazette won national attention for his calls for moderation and responsibility among Little Rock area citizens. Ashmore repeatedly criticized the defiant position of Arkansas Governor Orville Faubus and answered conservative journalists who spoke for white supremacy and racial segregation, James Jackson Kilpatrick of the Richmond News-Leader in particular. In Little Rock and around the state, white Citizens Councils led a boycott against the Gazette and had the encouragement of Faubus in their efforts. Ashmore received threats of violence to himself and his family, as Little Rock became the center of the nation's attention in the fall of 1958. Ashmore's coverage of these events was carried by Life magazine, and his editorials for the Gazette won Pulitizer Prizes in journalism for him and the newspaper.

In 1960 Ashmore accepted the invitation of Robert Maynard Hutchins to join the Fund for the Republic and to become the chairman of the executive committee of its Center for the Study of Democratic Institutions in Santa Barbara, California. The fund had been created by the Ford Foundation to advance the cause of civil rights and civil liberties and had been providing grant support for interracial organizations in the South. Ashmore maintained his interest in race relations in America and took on special assignments for major newspapers. He also served as editor-in-chief of the Encyclopedia Britannica.

Ashmore remained throughout his career a Democratic Party stalwart. He worked with the Adlai Stevenson campaigns of 1952 and 1956 as strategist and speechwriter. He is best characterized as a committed but pragmatic liberal. He spoke out against the militant and violent elements that became vocal in the civil rights movement after the death of Martin Luther King, Jr. and warned against the radical ideologies of the New Left movement of the 1960s. Ashmore opposed President Lyndon Johnson's conduct of the war in Vietnam, and in 1967 and 1968, with journalist Bill Baggs of the Miami News, he undertook an unsuccessful peace mission to Hanoi with the cooperation of the State Department. He also maintained his liberal commitments through his work with the American Civil Liberties Union and his service to that organization as its vice-president.

Harry Ashmore once said that he wanted to make journalism a bridge between the world of ideas and the world of men. His lively writings on history and contemporary affairs reflected that objective.

Ashmore wrote two books in the 1980s: Hearts and Minds: The Anatomy of Racism from Roosevelt to Reagan (1982); and Hearts and Minds: A Personal Chronicle of Race in America (1988); the former is heavily autobiographical and contains many useful observations of the half-century course of the civil rights movement. Ashmore wrote Arkansas: A Bicentennial History (1978) for the Norton series on the American states. Mission to Hanoi (1968), with William C. Baggs, recounts the secret diplomatic journey undertaken by the two journalists. Ashmore's An Epitaph for Dixie (1957) is a trenchant analysis of the South and its class and racial attitudes, and his article "The Untold Story Behind Little Rock," written for Harper's Magazine (June 1958), provides a first-hand account of the integration crisis. A TIME magazine article, "Damned Good Pro" (October 14, 1957), is an appreciative tribute to Ashmore's editorial campaigns against the segregationists. □