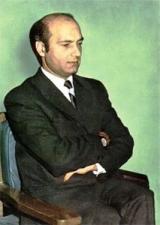 Ali Shariati (1933-1977) has been called the "Ideologue of the Iranian Revolution." His reinter pretation of Islam in modern sociological categories prepared the way for the Islamic revival that shook Iran in 1979, attracting many young Muslims who had been alienated both from the traditional clergy and from Western culture.

Shariati was born in Mazinan, Khurasan, a small village in Eastern Iran, in 1933 and was educated by his father, Aqa Muhammad Taqi Shariati. His youth was spent in Meshad where his father established the Center for the Propagation of Islamic Teachings. After high school he entered Teachers' Training College and became an active member of his father's center. He entered the University of Meshad in 1956, graduating in 1960. From 1960 to 1964 a state scholarship enabled him to study at the University of Paris, where he gained sociological insight and pursued Islamic studies with the renowned French scholar Louis Massignon. In France he was influenced by the radical Marxism of Jean-Paul Sartre, Albert Camus, and Franz Fanon. Despite this influence he criticized these thinkers for their rejection of traditional religion and suggested that the only way the deprived nations could counterbalance Western imperialism was through the cultural identity preserved by religious traditions.

While in France Shariati had joined with such other Iranian expatriates as Mehdi Bazargan and Bani Sadr who supported resistance to the shah of Iran. Not unexpectedly, he was imprisoned for a time on his return to Iran in 1964. Although turned down for a teaching position at the University of Teheran, he taught at a variety of high schools until a position became available at the University of Meshad. There he became a popular teacher, using an innovative method which expounded Islamic doctrine using a sociological approach. While some Muslim clergy criticized his lack of Islamic expertise, others sympathized with his attempt at modernization and helped him revise the content of his writings. His classes, however, threatened the government establishment, which had them suspended.

In 1965 he established a center of Muslim religious teaching, the Husaniya-yi Irshad in Teheran, and he moved there in 1967. The choice of an institution dedicated to the martyrdom of Husayn in the struggles against the Ummayyads (660-750 A.D.) emphasized his commitment to the struggle against the tyranny of the shah's regime in Iran. His political influence was so great that the regime had him arrested again in 1973 and closed down the Husaniya, banning his works. Although released in 1975, his freedom was restricted. In June 1977 he travelled to England, where he died under circumstances that his supporters insisted suggested the involvement of SAVAK, the Iranian secret police.

The guiding principle of Shariati's thought, like that of Islam generally, is tawhid or unity. On one level this refers to the excellence of the human being. God creates humanity out of clay and spirit, thus enabling a unity of all elements in creation. The human being is thereby made the vice-regent (kalifa) for God, bringing perfection to the created world. On another level the principle of unity must be applied to the social world. Every corruption and injustice in the world comes from a lack of unity. The Muslim proclamation that God alone is to be worshipped, made five times daily, conquers greed, envy, and fear by liberating the individual from selfishness.

The implications of this view are radical. If the central significance of the Muslim creed is individual liberation, then any form of dependency is wrong. The Muslim clergy have embraced the principle of imitation (taqlid) rather than creative innovation (ijtihad) as the basis for deciding Islamic behavior. Shariati opposed blind traditionalism, citing the Koranic statement that "God does not change what is in a people until they change what is in themselves" (Sura 13, Aya 11). The test of a Muslim society lies less in its traditionalism than in its ability to utilize traditional thought to meet the challenge of creating a just society. The ideal of unity requires individuals who can lead a society to the virtues it represents and the social justice which it demands.

Shariati's View of the Religious Leader

Attaining tawhidrequires the help of religious leaders, but they must be leaders of the right type. The ideal of Mohammad stands as the model of a leader who can use religious insight and knowledge of social norms to transform society. The true religious leader is one who takes up the social responsibility that Mohammad displayed and gains the confidence of the people, thereby educating the society, transmitting religious teachings, and improving the condition of human society. He found the radical emphasis on change and the role of leadership echoed in classical Muslim sources. The Koran proclaims that Allah (God) and the people (al nas) are often identical. In order to know God's will it is important, then, to look to what the people are saying, thinking, and doing. Since the time of Muhammad and his early successors (and Shariati aroused dissent by accepting much of the Sunnite evaluation of those leaders despite his own commitment to Shi'ite Islam) religious leadership has waned. He declared that in the modern period it was necessary to return to the primal responsibilities of social consciousness and creativity.

In practical terms he took this to mean that the intellectuals rather than the clergy would bring about the return to the original meaning of Islam. He looked forward to a new type of religious leader. The qualifications were not only knowing the Koran, but knowing its social message and its vision of a new social world, not only being an expert in the biography of the Prophet, but recognizing the place of the Prophet in a Koran-oriented society; not only knowing Islamic history but having the ability to use that knowledge as a model of just social behavior; and, finally, being acquainted with Islamic culture as the basis for Muslim identity.

The problem with the traditional clergy, he explained, was that they were content to look at Islam as a set of general universal principles. Instead, they should apply Islamic ideals to the particulars of Muslim society, the particular problems with which both individuals and the community as a whole must struggle. Such views irritated many of the clergy, and in 1968 Ayatollah Motahari, a disciple of Ayatollah Ruhollah Musavi Khomeini, resigned from the Teheran Husaniya in protest against Shariati's anticlericalism, anticipating the anti-intellectualism that followed the 1979 revolution. Shariati himself responded to such critics by vigorously attacking the established clergy. Despite the victory of the clerical leaders in the Iranian revolution, however, his ideas continued to be influential among younger Iranian Muslims.

There is no single biography available for Ali Shariati. A useful article, "Ali Shariati: Ideologue of the Iranian Revolution," by Abulaziz Sachedina, can be found in Voices of Resurgent Islam, edited by John L. Esposito (1983). Books concerned with modern Islam in general or with Iran often included sections on Shariati; see in particular Michael Fischer, Iran From Religious Dispute to Revolution (1980) and Malaise Ruthven, Islam in the World (1984). Many of Shariati's pamphlets and essays have been translated into English. See especially his Marxism and Other Western Fallacies (1980) and On the Sociology of Islam (1979). □

oxford
views updated
Sharīʿatī, ʿAlī (1933–77). Iranian thinker whose writings and lectures represent the ideology that precipitated the 1979 Islamic revolution in Iran. From 1964 until his death, he attracted vast audiences, mainly university and college students, at the Husayniya-i-Irshad, a religious centre in Tehran. During this time he produced his greatest work, The Desert (Pers., Kavir): ‘Seeking refuge in history out of fear of loneliness, I immediately sought out my brother Ayn al-Quzat [12th-cent. Persian Sūfī] who was burned to death in the very blossoming of his youth for the crime of awareness and sensitivity, for the boldness of his thought. For in an age of ignorance, awareness is itself a crime.’ The government closed the centre and imprisoned Sharīʿatī for eighteen months, during which time he was tortured. Upon his release he was allowed to go to England, where shortly after his arrival he died in mysterious circumstances.

Jihad , Jihad The word jihad is derived from the Arabic root jahada, meaning "to strive" or "to exert oneself" toward some goal. In this general sense, jihad… Material Culture , This article describes and discusses some aspects of the material culture of Islam to underscore and appreciate the diversities of Islamic societies… Alija Izetbegovic , Alija Izetbegovic Alija Izetbegovic (born 1926), a lawyer, businessman, and writer, founded the Muslim-based Party for Democratic Action in 1989. He… Ayatollah Ruhollah Khomeini , Khomeini, Ayatollah Ruhollah Born on c. 1900 (Khomein, Persia) Religious leader of Iran Politician Ayatollah Ruhollah Khomeini was the leader of the… Hasan Al-banna , An Egyptian religious leader, Hassan Al-Banna (1906-1949) was the founder of the Muslim Brotherhood, which is considered the forerunner of contempora… Caliphate , CALIPHATE . The office of "successor" to the prophet Muḥammad as the leader of the Muslim community is a uniquely Islamic institution. Hence the angl…