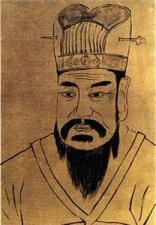 Wang Mang (45 B.C.-A.D. 23) was a Chinese statesman and emperor. An official under the former Han dynasty, he took the Han throne and founded his own Hsin dynasty. He attempted many economic and political reforms, all of which failed.

Wang Mang owed his positions, first as an official of the Han dynasty and then as emperor of his own dynasty, to the fact that he was the nephew of the Empress (née Wang) of Emperor Yüan (reigned 48-33 B.C.). Because of her, the Wang family dominated the Han government for about a quarter century.

Wang Mang, who became known for his diligence, studied Confucianism, particularly its ritual ceremonies. He treated family members and eminent government figures with the utmost respect. About 22 B.C. his uncle recommended him for official position, and as he moved upward through the ranks of officialdom, he became ever more humble in his behavior.

By 8 B.C. Wang was promoted to the highest position in the bureaucracy. About this time he brought charges against another minister, who was executed even though he was a relative of Wang's famous aunt. This case added to Wang's reputation of being straightforward and scrupulously honest.

Power behind the Throne

In 7 B.C. Wang had to leave the government. Because of a dynastic crisis in 1 B.C., his aunt recalled him, and he was instrumental in putting Emperor P'ing (reigned 1 B.C. A.D. 6) on the throne. Since the Emperor was only 9 years old, Wang dominated the government. In order to protect his own position, Wang prevented the family of the Emperor's mother from moving into positions of authority. There were objections to this, including the use of omens to threaten Wang Mang. Wang's son, who was among the objectors, was arrested and died in prison. The event increased Wang's fame for impartiality. In the following year, A.D. 4, Wang married his daughter to the young emperor, thus securing his own position in the government.

By this time the Han dynasty was in grave difficulties. There was dissatisfaction in officialdom, and since recent emperors had died without sons, there were rumors that heaven was indicating that the dynasty had run its course. Wang attempted to deal with these problems by attracting scholars to the court, by enlarging the educational system, by granting pay raises and pensions to officials, and by restoring prestige to members of the imperial family. These measures, in conjunction with a bountiful harvest in A.D. 3, produced a general feeling of well-being. It was believed that Wang Mang had rescued the faltering dynasty from collapse. In A.D. 5 it was proposed that he become regent. However, before any action was taken on that proposal, Emperor P'ing died at the age of 14.

Wang now moved to seize the throne. At this time there were no male descendants of any of the past four emperors. Wang passed over the adult descendants of Emperor Hsüan (reigned 73-47 B.C.) and selected a two-year-old infant who was not enthroned but was given the title Heir Apparent and Young Prince. Soon (A.D. 6) a portent appeared, supposedly sent by heaven, directing that Wang become emperor. This step was not taken, but Wang was elevated to regent and then to acting emperor. During the next two years there were many portents "proving" that Wang should become actual emperor. Finally, on Jan. 10, A.D. 9, he took the throne, announcing the founding of the Hsin (New) dynasty (9-23).

The fact that relatively little effort was needed to take over the throne was due to a combination of factors. Briefly, there was a general feeling that the Han dynasty had lost its heaven-granted mandate to rule; the deaths of several emperors without sons tended to encourage this belief. Furthermore, the numerous portents and omens were positive proof that heaven had chosen Wang Mang to succeed to the Han throne. And, since Wang had a well-established reputation, it was felt that he was eminently suited for the position. Hence, except for a brief uprising in A.D. 7, there was very little opposition to his "usurpation" of the Han throne, even by members of the Han house.

His Reforms and Policies

Wang Mang's activities as emperor can be treated under four headings: land reform, administrative reforms, foreign policies, and economic and currency reforms. Land tenure and slavery presented acute socioeconomic problems that Wang tried to face directly. For a century and a half officials had tried to limit the amount of land that an individual could own. A similar problem had arisen with regard to slaveholding by the wealthy. Wang Mang ordered the nationalization of all land, which he planned to redistribute periodically. Slavery was abolished. However, because of opposition from the aristocracy Wang had to countermand these order in A.D. 12, less than 3 years after they had been issued.

Wang's attempts to improve the administration amounted to little more than repeated changes of names of offices and administrative units. Wang sincerely believed that he was acting as the perfect Confucian ruler when he substituted Chou-dynasty designations for Han official titles and when, for these and other reasons, he altered place names. However, decrees and orders were sent to the wrong places because of the confusion that permeated the bureaucracy, and his attempt at restoring Confucian purity ended in a chaotic array of titles.

In foreign affairs Wang Mang enjoyed no success whatsoever. He insulted the tribal leaders on all his frontiers when he changed their titles. Furthermore, there were droughts along the northern border which caused the Hsiung-nu to raid Chinese settlements. Beginning in A.D. 10 most of the frontiers were in an uproar. Wang began preparations to send a huge 300,000-man army against his northern enemy. Although these plans were canceled and peace was restored in 13, the situation did not remain stable very long. By 18 the Chinese were again sending armies against the Hsiung-nu. New taxes were levied, and the ruler again prepared to send thousands of troops to the north. Comparable unrest existed in all of China's border areas until after the end of his reign. Wang's foreign problems accounted for many of his economic policies.

In order to raise money, state monopolies were created or existing ones were more rigorously enforced. Wang also reintroduced a system for equalizing prices. However, the monopolies created an additional hardship on the already-strained peasantry, and the system for equalizing prices was badly abused by avaricious officials. He attempted currency reforms by issuing new coins. But the coinage was in confusing denominations, and it was debased. Both officials and commoners rejected the money, even though that meant severe punishments. Wide-scale discontent was the main result of these measures.

By the late teens of the first century, Wang Mang had little left to his credit. His reforms were failing. The various military preparations had been extremely hard on the commoners. His economic policies had been counter-productive, for they had created great hardship and resentment. In addition, eastern China suffered from a flood of the Yellow River in A.D. 11 which sent thousands of people from their homes and into a life of vagabondage or banditry.

Then droughts were so severe in the years 18-22 that cannibalism was reported in the area. Wang Mang offered succor by teaching the people how to eat grass and tree bark. In 18 many bandit groups began disrupting eastern China. Descendants of emperors of the Former Han ruling house saw the rising disorders as an opportunity to restore the Han dynasty. Several of them joined with bandit groups in Honan. The nature of these hordes now changed; instead of consisting largely of illiterate peasants plundering the countryside, they became organized military units with the avowed political aim of restoring the Han dynasty.

Wang Mang by this time was in no condition to rule. He had become psychotically distrustful of everyone and felt compelled to rule single-handedly. More urgent business took precedence over appointments, and offices remained empty for as long as three years. Administration almost ground to a halt. As the advancing troops, now called the Han army, moved toward the palace, Wang Mang surrounded himself with religious paraphernalia and pathetically begged for supernatural intervention. On Oct. 6, A.D. 23, Wang's defenders were defeated, and Wang Mang was killed.

Wang Mang was originally hailed as the hero who had saved the Han dynasty from extinction; he ended up vilified as the usurper who had brought the Former Han to its end. In spite of his many failures, he was a significant, though tragic, historical figure. For over 200 years no one again tried to cope with China's land problem, but Wang's bold attempts dramatize clearly the extent to which remedial measures were needed and the magnitude of aristocratic power. His manipulation of omens and portents led directly to a new body of Confucian literature, known as the Apocryphal Texts, which was to become the dominant trend within Confucianism for almost 2 centuries. But his commitment to the ritualistic and ceremonial aspects of Confucianism contributed to the growth of another trend within Confucianism which by about 200 supplanted the omenistic thought of the earlier period.

Wang Mang's life and activities are extensively treated in Pan Ku, The History of the Former Han Dynasty: A Critical Translation, with annotations by Homer H. Dubs (3 vols., 1938-1955).

Pan, Ku, Wang Mang: a translation of the official account of his rise to power as given in the history of the former Han dynasty, Westport, Conn.: Hyperion Press, 1977. □

oxford
views updated
Wang Mang (33 bc–ad 23) Emperor of China. A usurper, he overthrew the Han dynasty and proclaimed the Hsin (New) dynasty in ad 8. Opposition from landowners and officials forced him to withdraw reforms and the dynasty, which divides the Early Han from the Later Han, ended with his assassination.