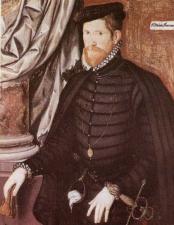 oxford
views updated
Throckmorton, Sir Nicholas (1516–71). Diplomat. Of gentry stock from Coughton Court (War.), Throckmorton was related to Catherine Parr, Henry VIII's last wife, and joined her household. From 1545 until 1563 he was in most parliaments and was in favour during the reign of Edward VI, being a zealous supporter of the reformed religion. In Mary's reign he was accused of complicity in Wyatt's rebellion but was acquitted: he did not serve in Mary's parliaments of 1555 or 1558. With the accession of Elizabeth, Throckmorton's career prospered and he represented her at the court of France (helping to negotiate the treaty of Troyes). He was next employed in Scottish affairs but his sympathy for Mary, queen of Scots, caused him to fall into disfavour. His reputation as a ‘machiavellist’ and his equivocal conduct at the accession of Mary may have led to mistrust and he did not achieve high office.

Sir George Cayley , Cayley, Sir George Sir Thomas Urquhart , Sir Thomas Urquhart (both: ûr´kərt), 1611–60, Scottish translator and author. A royalist, he was knighted (1641) by Charles I and fought in the civil… Royal Society , Royal Society, oldest scientific organization in Great Britain and one of the oldest in Europe. It was founded in 1660 by a group of learned men in L… Sir John Oldcastle , Oldcastle, Sir John Sir John Oldcastle, 1378?–1417, English leader of Lollardry. He married the heiress of Lord Cobham in 1408 and was known as "the… Sir Ralph Sadler , Sadler, Sir Ralph (1507–87). Sadler spent much of his life among the Scots, a nation he thought ‘unreasonable, rude, beastly and inconsistent’. But a… Mary Stuart , Stuart, Mary DIED: February 8, 1587 • Northamptonshire, England Scottish queen The most famous queen in Scottish history, Mary Stuart was also queen…