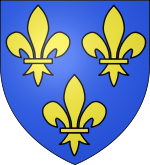 Herrings, battle of the

oxford
views updated
Herrings, battle of the, 1429. In October 1428 the duke of Bedford invested Orléans. On 12 February 1429 Sir John Fastolf, bringing supplies of herrings and lentils to the besiegers, was attacked at Rouvray by a superior force under the comte de Clermont. The attackers were driven off with heavy loss and the supplies got through, but Orléans was relieved by Joan of Arc in April.