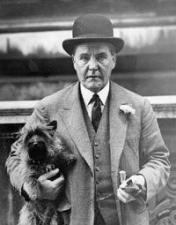 oxford
views updated
Smith, Frederick E., 1st Lord Birkenhead (1872–1930). Lord chancellor. Educated at Birkenhead and Oxford, Smith made a name for himself as a barrister in Liverpool where (1906) he was elected as a Conservative MP. His rhetorical onslaughts against the Liberal government brought him to the attention of the Tory die-hards, and in 1911 he joined the opposition front bench. In 1915 he became solicitor-general and then attorney-general in the wartime coalition government, and in 1919 was appointed lord chancellor; from 1924 to 1928 he served as secretary of state for India. Smith has been unfairly characterized as an unmitigated reactionary. Though a supporter of Ulster's right to opt out of Home Rule, Smith did his best to bring about a compromise in the Irish question, and played a key part in the negotiations which led to the Irish treaty of 1921. He also devoted much energy to law reform; the passage of the Law of Property Act (1922) was largely due to his efforts.