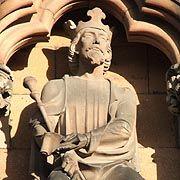 oxford
views updated
Æthelwulf (d. 858), king of Wessex (839–58). The son of Egbert (802–39) and father of four kings, the youngest of whom was Alfred the Great (871–99), Æthelwulf is a far from negligible figure in Anglo-Saxon history. He was a competent military leader, acting as a subking in the south-east in his father's lifetime (829–39), and conducting substantial campaigns against the Danes at Aclea in Kent in 851 and against the Welsh of Powys (in support of his Mercian allies) in 853. Much of his personal interest seemed, however, to lie in ecclesiastical directions. He made generous provision for the financing of churches (his Decimations), apparently in the form of grants of a tenth of royal lands into the hands of thegns empowered to transfer proceeds to religious foundations. In 855 he yielded his authority to his eldest son Æthelbald, and went on pilgrimage to Rome, possibly accompanied by his young son Alfred, who would have been about 6. Æthelwulf was away from his kingdom for a twelvemonth, and on his return with a Frankish princess as a bride (a young girl, Judith, held to be only 12 years old) he was forced to agree to a division of the kingdom with his own authority confined effectively to the south-east until his death in 858. Æthelbald then succeeded to the whole kingdom, and also, in spite of the fact that she was his stepmother, married Judith.

Lombards , A nation of Germanic barbarians who entered the Italian peninsula in 568. Their kingdom survived until 774, when it fell to Frankish conquest under c… Cunobelinus , Cunobelinus succeeded Tasciovanus as king of the Catuvellauni around ad 5. His coins identify him as the son of Tasciovanus, but whether this was by… Queen Of Castile And Lyon Urraca , Queen Urraca (c. 1078-1126), who ruled the Kingdom of Leon-Castilla (also known as Castille-Leon) in northern Spain from 1109 to 1126, was the only w… Isambard Kingdom Brunel , BRUNEL, ISAMBARD KINGDOM (1806–1859), English engineer. Isambard Kingdom Brunel has come to be regarded as one of the heroic engineers of the British… Aethelbald , Æthelbald (d. 757), king of Mercia (716–57). In his time any member of an extended royal family had an accepted chance to capture the throne. This is… Merovingians , MEROVINGIANS A family of Frankish origin which established an extensive kingdom in Gaul during the late 5th and early 6th centuries over which the fa…