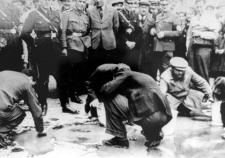 The Austrian statesman Kurt von Schuschnigg (1897-1977) served as chancellor of Austria from 1934 to 1938. He succeeded in preventing German absorption of Austria until he lost the support of Mussolini in 1937.

Kurt von Schuschnigg was born on December 14, 1897, at Riva on Lake Garda (now a part of Italy). He was the son of an Austrian army officer. Educated in a Jesuit gymnasium at Feldkirch, Schuschnigg served in the Austro-Hungarian army on the Italian front in World War I. He was decorated for bravery and was a prisoner of war during 1918-1919. In 1922 he received a doctorate in law from the University of Innsbruck.

Schuschnigg's political views were characteristic of Austrian clerical conservatism. He was a zealous Catholic, staunch antileftist, vehement anti-Nazi, and fervent legitimist. He would have preferred to solve Austria's political problems through the restoration of the Hapsburg dynasty. Schuschnigg had no recourse but to follow Dollfuss's reliance on Italian premier Benito Mussolini's protection against Nazi Germany's desire for Anschluss. The imposition by the League of Nations of sanctions against Italy for its aggression against Ethiopia in 1935 drove Italy into the arms of Germany and rendered Mussolini unable further to defend Austrian independence from German encroachment.

On February 12, 1938, Adolf Hitler summoned Schuschnigg to Berchtesgaden, where he demanded that Schuschnigg order the amnesty of jailed Austrian Nazis and that he include Nazis in his Cabinet, particularly Artur Seyss-Inquart. Schuschnigg agreed to Hitler's demands, but on his return to Vienna he restated his vow to preserve Austria's independence. Hitler then ordered the Austrian Nazis to foment disorder throughout the country. When Schuschnigg ordered a plebiscite to ascertain the country's opinion of his determination to maintain Austria's independence, Hitler demanded the plebiscite's delay and he ordered troops to Austria's border on Schuschnigg's refusal. Schuschnigg then resigned, and he was succeeded by Seyss-Inquart, who called German troops into the country in March 1938.

After the German Anschluss, Schuschnigg was imprisoned by the Germans until 1945, when he was liberated by American troops. He then emigrated to the United States and became professor of political science at St. Louis University, Missouri, until 1967 when he returned to Austria and retired. He died in 1977.

There were few sources available in English for a study of Schuschnigg. His own works, such as Farewell Austria (1937; trans. 1938) and Austrian Requiem (1946), contained valuable information but must be used cautiously. Perhaps the best discussion of Schuschnigg's career as Austrian chancellor was in John A. Lukacs, The Great Powers and Eastern Europe (1953). See also Dieter Wagner and Gerhard Tompowitz, Anschluss: The Week That Hitler Siezed Vienna trans. 1972). □

National Socialism , As an ideology, National Socialism was a mixture of extreme nationalist, racialist ideas and a trend of populist radicalism which never formed a cohe… Engelbert Dollfuss , Engelbert Dollfuss Engelbert Dollfuss The Austrian statesman Engelbert Dollfuss (1892-1934) served as chancellor of Austria from 1932 to 1934. Engelb… Vidkun Quisling , Vidkin Quisling Vidkun Quisling (1887-1945) served as the prime minister of Norway during the German occupation, from 1940 to 1945. He collaborated w… Nancy Witcher Astor Viscountess Astor , Astor, Nancy W. (1879–1964). Politician, and daughter of an American railway developer in Virginia. Nancy Astor had an unhappy first marriage, which… Heinrich Von Treitschke , Treitschke, Heinrich von Treitschke, Heinrich von Heinrich von Treitschke (1834-1896), German historian and political publicist, was born in Dresden,… Appeasement , appeasement is generally used to describe the policy towards Nazi Germany pursued by Prime Minister Neville Chamberlain between 1937 and 1939, and ha…