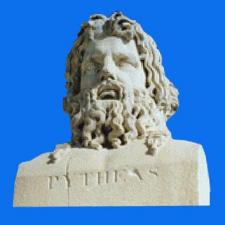 Pytheas (c. 380 B.C.-c. 300 B.C.), a Greek explorer from the city of Massalia in southern France, traveled all the way around Britain and wrote the first account of Scandinavia.

Pytheas was born in the Greek colony of Massalia on the south coast of France (now called Marseilles) in about 380 B.C. Sometime toward the end of the fourth century B.C., he was sent out by the merchants of his native city to find a route to the tin mines of southern Britain, which were the source of that valuable metal for all of Europe and the Mediterranean. The trade in tin was controlled by the Carthaginians (from the city of Carthage in present-day Tunisia), and the Greeks would have been glad to break their monopoly.

At that time, the Pillars of Hercules (the Straits of Gibraltar), the exit from the Mediterranean into the Atlantic, were controlled by the Carthaginians. So Pytheas either avoided them by going overland or he went during a time of Carthaginian weakness: possibly between 310-306 B.C. when Carthage was fighting a war with Syracuse in Sicily. In any case, he made it to the port of Corbilo at the mouth of the Loire River. From there he sailed to the island of Ouessant off the tip of Brittany.

Pytheas sailed from Brittany to Belerium (Land's End) in Cornwall, the southwestern tip of Britain, which was the source of tin. He described what he found: "The inhabitants of Britain who dwell about the headland of Belerium are unusually hospitable and have adopted a civilized manner of life because of their intercourse with foreign traders. It is they who work the tin, extracting it by an ingenious process. The bed itself is of rock but between are pieces of earth which they dig out to reach the tin. Then they work the tin into pieces the size of knuckle bones and carry it to an island that lies off Britain and is called Ictis (St. Michael's Mount, Cornwall); for at the time of ebb tide the space between this island and the mainland becomes dry, and they can take the tin in large quantities over to the island on their wagons."

From Cornwall, Pytheas sailed north through the Irish Sea between Britain and Ireland all the way to the northern tip of Scotland, probably going as far as the Orkney Islands. Along the way, he stopped and traveled for short distances inland and described the customs of the inhabitants. Beyond northern Scotland, Pytheas described another land called the "Island of Thule." (Ever since, the far northern extremes of the earth have had the poetic name of Thule: it is now given to the northernmost town in Greenland.) It is not clear whether Pytheas actually went to Thule or merely reports what he heard about it.

According to Pytheas, Thule is six days' sail north of Britain. In midsummer, the sun retires to its resting place for only two or three hours. The inhabitants lived on wild berries and "millet" (in this case, probably oats) and made mead (a drink) from wild honey. From his description, Thule was probably Norway in the present region of the city of Trondheim, although other locations have been suggested. North of Thule he was told of a land where the sea became solid and the sun never set in summertime. These reports seemed so crazy to the people of the Mediterranean world that his report was not believed and was ridiculed for years later.

From Thule, Pytheas sailed back to Britain and down its east coast and then crossed the North Sea to the North Frisian Islands off the coast of Germany and to the island of Heligoland, which he called Abalus. He said: "In the spring the waves wash up amber on the shores of this island. The inhabitants use it as fuel instead of wood … and also sell it to their neighbors the Teutons." From there Pytheas sailed back along the coast of Europe and returned home.

Py theas has generated more interest than any other of the ancient explorers. There are those who say that he is the first known explorer in the modern sense of the word. As a result, most histories of exploration have something to say about him, including: Fridtjof Nansen, In Northern Mists: Arctic Exploration in Early Times, 2 vols. (London: William Heinemann, 1911; reprinted, New York: AMS Press, 1969); M. Cary and E.H. Warmington, The Ancient Explorers (London: Methuen, 1929; reprinted in paperback, Baltimore, Md.: Penguin Books, 1963); Walter Woodburn Hyde, Ancient Greek Mariners (New York: Oxford University Press, 1947); Paul Herrmann, Conquest by Man (New York: Harper & Brothers, 1954); Björn Landström, The Quest for India (Garden City, N.Y.: Doubleday, 1964); Rhys Carpenter, Beyond the Pillars of Heracles: The Classical World Seen Through the Eyes of Its Discoverers (New York: Delacorte Press, 1966).

Easter Island , In one of the most remote spots on Earth, separated by more than two thousand miles of ocean from the nearest centers of civilization, is a lone, tri… Barrier Islands , A barrier island is a long, thin, sandy stretch of land oriented parallel to the mainland coast, which protects the coast from the full force of powe… Kanton , Phoenix Islands, group of eight islands, 11 sq mi (28 sq km), central Pacific, N of Samoa. The chain comprises a portion of Kiribati. The two most im… Celts , Celts Celts were a people who inhabited western and central Europe during the pre-Roman Iron Age (first millennium b.c.). Nineteenth-century European… South Orkney Islands , Orkney Islands, archipelago and council area (1991 pop. 19,650), 376 sq mi (974 sq km), N Scotland, consisting of about 70 islands in the Atlantic Oc… Odyssey , THE LITERARY WORK An epic Greek poem set around 1200 b.c. in Greece and surrounding lands; probably written in the eighth century b.c. SYNOPSIS The O…