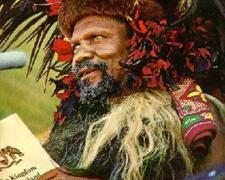 Sobhuza II (1899-1982) ruled the African nation of Swaziland for 60 years, first as a British Protectorate and after 1968, when Swaziland gained independence from England, as a sovereign state. During his reign, he regained much, but not all, of the land his people had lost to European colonists under the rule of his grandfather, Mbandzeni.

Born in 1899 in Zombodza, Swaziland, Sobhuza II was the great-great-grandson of Sobhuza I, who founded the Swazi nation, and he inherited a legacy of strife. After being attacked in the early 1800s by Ndwande chief Zwide, Sobhuza I had led his own people, the Ngwane, into the mountains, where they found refuge. Sobhuza I's son, Mswati (c. 1820-68) formed these refugees into a nation-state, called Swazi, and during his reign they became one of the most powerful groups in southern Africa. However, after his death, the nation collapsed into factions which fought each other over who should become Mswati's successor. In 1875, this bitter factional fighting ended in a compromise that resulted in Mbandzeni becoming king.

In 1873, gold was discovered in South Africa, and European prospectors flooded into Swaziland, looking for wealth and demanding land from Mbandzeni. In 1876, he granted 36,000 acres in southern Swaziland to two land speculators. Although he made a great deal of money from this transaction, receiving up to 20,000 British pounds per year for the next decade, the opening of land to Europeans ultimately led to a stripping of the country's resources.

When Mbandzeni fell into poor health, various factions in his court battled for control; as a result, several elder councillors, accused of plotting to overthrow Mbandzeni, were executed. When Mbandzeni died in 1889, his son, Bhunu (also known as Ngwane V) succeeded him. Because Bhunu was only 14 at the time, his mother acted as regent. Bhunu held the throne until he died at the age of 24, shortly after the birth of his son, Sobhuza II, in 1899.

Sobhuza's parents initially named him Nkhotfotjeni, which means "Stone Lizard." When his father died five months after his birth, Sobhuza was selected by a royal council to succeed him to the throne; as a mark of this distinction, he was renamed Sobhuza II after his great-great-grandfather. Because Sobhuza was still only an infant when he became king, his grandmother, Labotsibeni, became regent. She ruled Swaziland for the next 20 years.

During Labotsibeni's rule, there was considerable conflict between the Swazi people and the British. The nation came under British control as a protectorate in 1903. As a writer in the Times of London explained, this meant that "although the protected country is not a British dominion, its foreign relations are under the exclusive control of the Crown, so that its government cannot hold direct communications with any other foreign Power, nor a foreign Power with its Government." Thus, Swaziland was stripped of its autonomy, and was essentially under British rule.

Four years later, a resident commissioner appointed by the British government arrived in the country. This commissioner settled previous land disputes by ruling that 63 percent of Swazi land belonged to Europeans; as a result, almost half the Swazi people suddenly found themselves living in areas that were no longer part of the now-diminished Swaziland. These people were allowed five years to leave the European-controlled areas. If they did not, they would be forced out. According to an obituary in the Times, Sobhuza's father did not fight this, and in fact said, "If I do not give whites rights here, they will take them. Therefore I give when they pay. Why should we not eat before we die?"

Labotsibeni knew that in order for her country to win back its land, its people would have to deal with the British and that its next leader would have to understand European ways as well as African ones. She sent the young Sobhuza to special primary and secondary schools in Swaziland that had been created especially for him, with teachers she had brought in from South America. From 1916 to 1918, he attended Lovedale College in Cape Province, South Africa. In addition to educating him, Labotsibeni filled Sobhuza with the desire to regain the land his country had lost.

In 1921, Sobhuza became king of Swaziland and received another name, Ngwenyama, which means "The Lion." In 1922, he challenged the 1907 partition of the Swazi lands by the British High Commissioner. To do this, Sobhuza traveled to Britain with a Swazi delegation to meet with King George V and petition him to restore the lands to the Swazi people. King George and his secretary of state for the colonies refused. Sobhuza, undeterred, continued to press his case for the next 15 years, and was repeatedly refused. Eventually, however, King George agreed to help Sobhuza acquire land from white owners and return it to Swazi occupation. As a result, the land held by Swazis increased from 37 percent at the time of the partition to slightly more than 50 percent.

As a result of his education in European ways, Sobhuza was comfortable in both traditional African clothing and settings and in European-style military dress. He often led traditional Swazi rituals and was known by various nicknames, including "The Great Mountain," "The Bull," "The Son of the She-Elephant," and "The Inexplicable." Sobhuza valued his people's traditions, particularly the traditional royal rights to name and dismiss chiefs, to establish courts, to regulate the country's constitution, and to control the Swazi treasury. Another tradition Sobhuza adhered to was polygamy; he married at least 70 wives and had at least 210 children. The custom of taking two new wives each year was believed to preserve the political balance of the kingdom.

However, Sobhuza also freely adopted and used Western technology when it was useful to him or to the Swazi people. In Who's Who in Africa, John Dickie noted that Sobhuza once said, "As one of the last countries to achieve independence, we have had the opportunity of learning from nations which have won their independence before us. We have watched them crossing rivers [and] have seen [them] being swallowed by crocodiles. Now that we have seen the crocodile-infested drifts, we shall try to cross through crocodile-free drifts to a peaceful independent Swaziland."

In the 1960s, Sobhuza knew that it would be advantageous for him to align his royal interests with those of his country's white electorate, and he did so. As noted in the Times, "The greatest test of his authority was during the maneuvering before independence, but he showed himself to be an adept politician and secured complete control of the national assembly for his traditionally oriented Imbokadvo (Royal) Party. In the nation's 1964 legislative elections, the party won control of all but one seat. When Britain finally granted independence to Swaziland in 1968, Sobhuza became the nation's head of state.

In 1973, Sobhuza's rule was challenged by political opponents in a legislative election. In response, he suspended the rules of the constitution, which the country had inherited from England; dissolved the country's parliament; and banned all political parties and trade unions, viewing all these things as threats to his authority. He thus became an absolute ruler, and made all judicial, executive, and legislative decisions, as in a traditional tribal government; his National Council and personal advisors were almost all his close relatives or sons. He continued to rule as an absolute monarch until his death in 1982. His strong rule had the effect of reducing strife among various tribes and maintaining national unity. Unlike many other African nations of the time, Swaziland was a model of political and economic stability.

In 1981, Sobhuza celebrated the Diamond Jubilee of his reign; the ceremony was attended by Princess Margaret on behalf of Queen Elizabeth of England. His last public appearance took place on July 22, 1982, when he celebrated his birthday. He died a month later at the Embo state house, at the age of 83, after reigning 61 years. Although he had regained much of the land his people had lost to the British, he did not live to see his dream of incorporating all of what was once Swaziland under his rule. Two thousand square miles of the former Swazi land still remained part of South Africa.

To show their grief over his death, everyone in the Swazi kingdom, male and female, shaved their heads as a sign of mourning. Sobhuza, like many of his people, had converted to Christianity, and his death ceremonies mingled Christian hymns with the African songs of a traditional tribal funeral, which involved secret rites, such as wrapping the body in the skins of freshly killed oxen. Although his body, dressed in a dark blue military uniform and sitting upright in a wooden casket, was later paraded in a glass-covered casket past more than 25,000 of his subjects, many people refused to believe that their long-reigning monarch was dead. The funeral parade was also attended by massed army bands in natty European dress, as well as hundreds of royal warriors, who wore animal skins and brandished wooden spears. One of Sobuza's senior wives, ceremonially called "The Great She-Elephant," attended in tribal dress: barefoot, wearing animal skins and wearing a headband with a scarlet feather that signified she was a member of the royal clan. The funeral was also attended by many foreign dignitaries, including Prince Michael of Kent, England and the South African foreign minister, Pik Botha.

After Sobhuza's death, Swaziland entered a period of confusion because, in keeping with tradition, no successor to the throne could be designated while the reigning king was alive. Of his many wives and children, one wife had to be selected to rule as queen regent, and one of his great number of sons had to be chosen to ascend the throne; one traditional restriction was that the new king must be an only child. After several years, in 1986, Crown Prince Makhosetive became king, taking the name Mswati III.

Dickie, John, and Alan Rake, Who's Who in Africa, Africa Buyer and Trader, 1973.

Lobengula , Lobengula Lobengula Lobengula (died ca. 1894) was a South African Ndebele king. His kingdom was the last of the major African states to be destroyed… Senegal , Culture Name Senegalese Orientation Identification. The area that today is Senegal once was part of the West African Empire of Mali, Ghana, and Tekru… John Agyekum Kufuor , Kufuor, John Agyekum 1938— Politician, lawyer John Agyekum Kufuor—often dubbed the "gentle giant" because of his imposing height of six feet, three i… Venda , Venda Venda ETHNONYMS: Vhavenda, Bavenda Orientation Identification and Location. The Venda traditionally occupy an area in and around the Soutpansbe… Burma , Burma BURMA Characterized by its riverine system and the river valleys of the Salween, Sittang, and, especially, the Irrawaddy, Burma is a country of… Jomo Kenyatta , Kenyatta, Jomo 1891(?)–1978 Former President of Kenya On December 12, 1963, the flag of independent Kenya billowed over the capital city of Nairobi f…