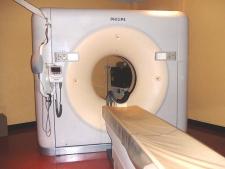 With the development of modern computers, the scans enhanced digital capabilities allowed the development of computed tomography imaging (derived from the Greek tomos, meaning "to slice"). The diagnostic potential of CT scans was first realized by English physician Godfrey Hounsfield.

CT scans differ from conventional x ray by collecting x rays that have passed through the body (those not absorbed by tissue) with an electronic detector mounted on a rotating frame rather than on film. The x-ray source and collector rotate around the patient as they emit and absorb x rays. CT technology then utilizes advanced computer-based mathematical algorithms to combine different readings or views of a patient into a coherent picture usable for diagnosis.

CT scans increase the scope and safety of imaging procedures that allow physicians to view the arrangement and functioning of the body's internal structures. With particular regard to neurology, CT scans are used to determine the presence or absence of brain tumors. CT scans usually take about an hour and a half, including preparation time, with the actual examination of neural tissue in a brain scan taking 15–45 minutes.

CT scanners are now often combined with positron emission tomography (PET) scanners into one unit. PETCT scanners have the ability to link the functional image created by a PET scan with the anatomical image produced by a CT scan. The combined scanning technique enhances a physician's ability to detect metabolic abnormalities (some no larger than 0.15 in [4 mm] in size) and to precisely map the location of the anomaly.

The combined PET-CT scanners offer physicians the opportunity to differentiate, for example, between Alzheimer's disease and multi-infarct dementia . In addition, the enhanced images allow the differentiation of brain tumors from cerebral necrosis.

The physical basis of the CT scans lies in the fact that different tissues absorb x rays at different rates. The density and atomic number of the elements present are critical factors in determining whether a particular x ray is absorbed or passes through the body. The opacity of an image is related directly to the type of tissue or element. Dense bone appears white, while gaseous air in the lungs appears black.

CT scans are also used by some security agencies to examine packages and baggage.

CT scans often utilize a medium or contrast enhancer, provided in the form of a drinkable liquid or via injection into the patient's bloodstream. Approximately 45 minutes before a patient is examined, the individual is given an intravenous injection of a radiopharmaceutical tracer. A brain scan and scan of the spinal cord can take less than 30 minutes.

Radiation exposure from a CT exam is roughly equal to a normal year's worth of exposure to natural background radiation—more than from a conventional x-ray examination, but less than that of other x-ray exams such as a skull x ray.

Because x rays are high energy rays that can damage critical cells in the developing embryo, women who suspect that they are pregnant should inform their doctor and the CT scan technologist prior to the exam. Nursing mothers are often advised to wait 24 hours after the injection of the contrast medium before resuming breast-feeding.

The CT: Computed Tomography Test. University of Iowa Department of Neurology. May 9, 2004 (May 27, 2004). <http://www.vh.org/adult/patient/neurology/computedtomographytest/>.