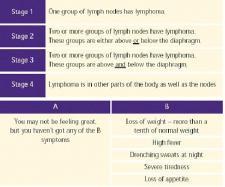 One of two general types of lymphomas (cancers that begin in lymphatic tissues and can invade other organs) differing from Hodgkin's disease (HD) by a lack of Hodgkin's-specific Reed-Sternberg cells.

Non-Hodgkin's lymphoma (NHL) is a cancer of lymphocytes, a type of white blood cell that moves around the body as part of its role in the immune system. NHL is much less predictable than HD and is more likely to spread to areas beyond the lymph nodes.

NHL is comprised of approximately 10 subtypes and 20 different disease entities. Division is based on whether the lymphoma is low grade (progressing slowly) or high grade (progressing rapidly). NHL is also grouped according to cell type—B cells or T cells. Physicians can diagnose the type of lymphoma by performing a biopsy , in which a lymph node is removed and examined in the laboratory. Some of the Non-Hodgkin's lymphoma types include: Burkitt's lymphoma , diffuse large B-cell lymphoma, follicular center lymphoma, and mantle cell lymphoma .

Hairy Cell Leukemia , Definition Hairy cell leukemia is a disease in which a type of white blood cell called the lymphocyte, present in the blood and bone marrow, becomes… Hodgkins Disease , DEFINITION Hodgkin's disease is a cancer of the lymphatic (pronounced lim-FAT-ic) system. The lymphatic system consists of blood vessels, tissues, an… Burkitt Lymphoma , Definition Burkitt's lymphoma (BL) is a type of non-Hodgkin's lymphoma (NHL) that is sometimes called a B-cell lymphoma or small noncleaved cell lymp… Langerhans-cell Histiocytosis , Histiocytosis X Definition Histiocytosis X is a generic term that refers to an increase in the number of histiocytes, a type of white blood cell, tha… Cancer Metastasis , Definition The ability to invade and metastasize are the defining characteristics of a cancer. Invasion refers to the ability of cancer cells to pene… Small Cell Lung Cancer , Lung Cancer, Small Cell Definition Small cell lung cancer is a disease in which the cells of the lung tissues grow uncontrollably and form tumors. De…