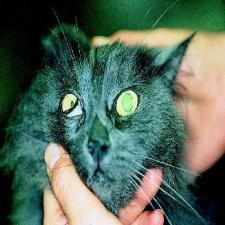 William Edmonds Horner (1793-1853) first described a small muscle at the angle of the eyelid (tensor tarsi) as well as a description of an ingenious operation to correct problems with the lower lid in 1824 in the American Journal of the Medical Sciences. Since that time, his name has been associated with the syndrome of a small, regular pupil, drooping of the eyelid on the same side and occasional loss of sweat formation on the forehead of the affected eye. In appearance, it occurs on one side of the face with a sinking in of the eyeball (enophthalmos), drooping upper eyelid (ptosis), slight elevation of the lower lid, excessive contraction of the pupil of the eye (miosis), narrowing of the eyelid, and an absence of facial sweat on the affected side (anhidrosis). Other symptoms may include a variation in eye color of the iris and changes in the consistency of tears.

Horner's syndrome is caused by damage or interruption of the sympathetic nerve to the eye. There are two major divisions of the nervous system: the voluntary (conscious control) and involuntary (without conscious control). The involuntary (autonomic nervous system) itself has two divisions: sympathetic and parasympathetic nervous systems. Under normal conditions, there is a fine balance between sympathetic and parasympathetic stimulation. If an individual is threatened by a situation, the pupils dilate, blood is shifted to the muscles and the heart beats faster as the person prepare to fight or flee. This is sympathetic stimulation. The eye has both sympathetic (responds to challenges) and parasympathetic (slows the body down) innervation. The nerve that carries the sympathetic innervation travels down the spinal cord from the brain (hypothalamus), emerges in the chest cavity, and then finds it way up the neck along with the carotid artery and jugular vein through the middle ear and into the eye. If these sympathetic impulses were blocked, the eye would have an overbalance of parasympathetic supply, which would result in a constriction of the pupil, relaxation of all the muscles around the eye and a sinking of the eye into the orbit—Horner's syndrome. Thus, damage that occurs anywhere along the course of this nerve's route from the brain to the eye can evoke this syndrome.

If the syndrome exists from birth (congenital), it is typically noted around the age of two years with the presence of a variation in the color of the iris and the lack of a crease in the drooping eye. Since eye color is completed by the age of two, a variation in color is an uncommon finding in Horner's syndrome acquired later in life.

The common causes of acquired Horner's syndrome include aortic dissection (a tear in the wall of the aorta to create a false channel where blood becomes trapped), carotid dissection, tuberculosis, Pancoast tumor (a tumor in the upper end of the lung), brain tumors, spinal cord injury in the neck, trauma to the cervical or thoracic portions of the spinal cord, cluster migraine headache, vertebrae destruction or collapse, compression of the spinal cord by enlarged lymph nodes, and neck or thyroid surgery.

The diagnosis and localization of this disorder is made with the use of pharmacological testing by an ophthalmologist. Topically placing drops of a 10% liquid cocaine into the eyes blocks the parasympathetic nerves so the sympathetic nervous system can be evaluated. After thirty minutes, the dilation of the pupils is noted and a Horner's pupil dilates poorly. A positive cocaine test does not, however, localize the area of the damage. After waiting for 48 hours, other medications are used to determine where the nerve interruption occurs. An individual's urine can test positive for cocaine up to two days following the initial test.

Children who are diagnosed with Horner's syndrome of a congenital origin may undergo surgical correction to strengthen the muscle of the eyelid and give it an appearance similar to the unaffected eye. The surgery improves the appearance of the child but does not alleviate the syndrome. For these cases a plastic surgeon may be preferred. Occasionally Horner's syndrome may be seen in a newborn with a neuroblastoma (tumor originating from nerve cells). This is almost always a sign of a localized tumor and is associated a relatively good prognosis. In these cases, a neurologist may be consulted for treatment since their specialty is the nervous system.

The treatment for acquired Horner's syndrome depends upon the cause and is focused toward eliminating the disease that produces the syndrome. Frequently, there is no treatment that improves or reverses the condition, but recognition of the signs and symptoms is extremely important for early diagnosis and treatment. Early detection of the syndrome may facilitate treatment related to those caused by tumors as they can be removed before extensive damage is done. Causes related to an interruption in nerve transmission once the nerve leaves the spinal cord are usually related to blood circulation and are easier to treat. Any numbness or paralysis on one side of the body means the problem is within the spinal cord or brain and is more difficult to treat. Some acquired Horner's may be corrected slightly by plastic surgery for appearance changes.

Acupuncture may be utilized to enhance disruptions in nerve transmissions and herbs or supplements that improve circulation may benefit some cases of acquired syndrome. These herbs and supplements would include Gingko biloba and vitamin E. As with any complementary treatment, patients should notify their physician of any herbal or over-the-counter medications they are taking.

—Present at and existing from the time of birth.

—That part of the third ventricle in the brain which anatomically contains the optic nerves.

—A tumor of nervous system origin composed chiefly of neruoblasts (embryonic nerve cells), affecting mostly infants and children up to 10 years of age, usually arising in the autonomic nervous system.

—A tumor or growth in the pointed end of the lung.

oxford
views updated
Horner's syndrome (hor-nerz) n. a syndrome consisting of a constricted pupil, ptosis, and an absence of sweating over the affected side of the face. The symptoms are due to a disorder of the sympathetic nerves in the brainstem or cervical (neck) region. [ J. F. Horner (1831–86), Swiss ophthalmologist]

Nystagmus , Definition Nystagmus is a condition in which there is involuntary and rhythmic movement or oscillation of the eye. It is often caused by an underlyin… Strabismus , Definition Strabismus is a condition in which the eyes do not align in the same direction. It is also called crossed eyes or squint. Description With… Trabeculectomy , Goniotomy Definition Purpose Demographics Description Diagnosis/Preparation Aftercare Risks Normal results Morbidity and mortality rates Alternatives… Corneal Abrasion , Corneal abrasion Definition A corneal abrasion occurs when there is a loss of cells from the epithelium or surface of the cornea. It is usually due t… Iridotomy , Definition Laser iridotomy is a surgical procedure that is performed on the eye to treat angle closure glaucoma, a condition of increased pressure in… Pineal Eye , pineal eye (epiphysial eye, median eye) In Sphenodontidae (tuatara), some lizards, Petromyzonidae (lamprey), and many fossil vertebrates, a structure…