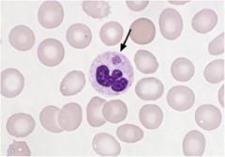 What Happens When People Get Ehrlichiosis?

Can Ehrlichiosis Be Prevented?

Ehrlichiosis (air-lik-e-O-sis) is an infectious disease caused by various strains of Ehrlichia (air-LIH-kee-uh) bacteria, transmitted to humans by ticks.

for searching the Internet and other reference sources

Caused by an organism once thought to infect only dogs, sheep, cattle, goats, and horses, ehrlichiosis was first discovered in humans in 1953 when researchers in Japan found that Sennetsu fever, an illness that resembles mononucleosis*, was caused by Ehrlichia sennetsu bacteria. Since the 1980s, scientists have identified three additional strains* of Ehrlichia bacteria that cause forms of human ehrlichiosis in the United States: E. chaffeensis, which causes human monocytic ehrlichiosis (HME); bacteria similar or identical to E. phagocytophila or E. equi (known to cause ehrlichiosis in animals), which cause human granulocytic ehrlichiosis (HGE); and E. ewingii, which has only been seen in a few patients in the midwestern United States and Tennessee.

*mononucleosis
(mah-no-nu-klee-O-sis) is an infectious illness caused by a virus that often leads to fever, sore throat, swollen glands, and tiredness.

*strains
are subtypes of particular species of organisms, such as viruses or bacteria.

Ehrlichiosis interferes with the body’s immune system by attacking white blood cells, a vital part of the body’s defense against invading bacteria, viruses, and other microbes* or harmful substances. Untreated, the disease can leave people vulnerable to other infections.

Between 1986 and 1997, 1,223 cases of human ehrlichiosis were reported in the United States. Most occurred along the Atlantic Coast and in southern and central states, although cases were reported in almost every region of the country. The number of cases peaks during tick season, which runs from April to October.

What Happens When People Get Ehrlichiosis?

Most cases of ehrlichiosis are associated with mild flulike symptoms, such as fever, chills, headaches, muscle or joint pain, nausea and vomiting, cough, stomach pain, and sore throat. Some people with the infection show no symptoms at all. Symptoms usually start within 2 weeks of a tick bite but can take up to a month to appear.

Because ehrlichiosis shares many symptoms with Lyme disease* and other infections transmitted by ticks, diagnosis based on symptoms alone can be difficult. Blood tests are done to look for evidence of Ehrlichia infection, such as antibodies* to the bacteria or the presence of the germ itself in the blood.

*Lyme
(LIME) disease is a bacterial infection that is spread to humans by the bite of an infected tick. It begins with a distinctive rash and/or flulike symptoms and, in some cases, can progress to a more serious disease with complications affecting other body organs.

*antibodies
(AN-tih-bah-deez) are protein molecules produced by the body’s immune system to help fight specific infections caused by microorganisms, such as bacteria and viruses.

If treated early, ehrlichiosis responds very well to certain antibiotics. Over-the-counter medicine such as acetaminophen (uh-see-teh-MIH-noh-fen) can help lower fever and relieve pain. Usually, people recover from mild cases of ehrlichiosis soon after finishing a week of antibiotic treatment. In severe cases, patients may need treatment in the hospital.

Although many cases of ehrlichiosis are mild, the infection can become serious if it is not treated. Some people who get ehrlichiosis develop anemia* and inflammation of the liver and kidneys. Breathing problems, internal bleeding, brain inflammation (encephalitis, en-seh-fuh-LYE-tis), and seizures* can also develop. People with weakened immune systems, such as those with HIV (human immunodeficiency virus*) infection, certain types of cancer, or the elderly, tend to develop more severe symptoms and complications. For these people, ehrlichiosis can be fatal.

*anemia
(uh-NEE-me-uh) is a blood condition in which there is a decreased amount of oxygen-carrying hemoglobin in the blood and, usually, fewer than normal numbers of red blood cells.

*seizures
(SEE-zhurs) are sudden bursts of disorganized electrical activity that interrupt the normal functioning of the brain, often leading to uncontrolled movements in the body and sometimes a temporary change in consciousness.

Can Ehrlichiosis Be Prevented?

Avoiding direct contact with ticks is the best way to prevent ehrlichiosis. Experts recommend that people use tick repellent and wear light-colored, long-sleeved shirts (to help find ticks more easily) and long pants tucked into socks when entering potentially tick-infested areas such as woods or campgrounds. After visiting such areas, it is wise to carefully check the body, clothes, and hair for ticks. Pets need to be checked as well.

Ehrlichiosis is a bacterial infection that is spread by ticks. Symptoms include fever, chills, headache, muscle aches, and tiredness.

Ehrlichiosis is a tick-borne disease caused by infection with Ehrlichia bacteria. Ticks are small, blood-sucking arachnids. Although some ticks carry disease-causing organisms, most do not. When an animal or person is bitten by a tick that carries bacteria, the bacteria are passed to that person or animal during the tick's feeding process. It is believed that the tick must remain attached to the person or animal for at least 24 hours to spread the infection.

Both forms of ehrlichiosis have similar symptoms, and the illnesses can range from mild to severe and life-threatening. Risk factors include old age and exposure to ticks through work or recreation. Symptoms occur seven to 21 days following a tick bite although patients may not recall being bitten. Fever, tiredness, headache, muscle aches, chills, loss of appetite, confusion, nausea, and vomiting are common to both diseases. A rash may occur.

Ehrlichiosis may be diagnosed and treated by doctors who specialize in blood diseases (hematologists) or an infectious disease specialist. Because ehrlichiosis is not very common and the symptoms are not unique, it may be misdiagnosed. A recent history of a tick bite is helpful in the diagnosis. Blood tests will be done to look for antibodies to Ehrlichia. Staining and microscopic examination of the blood sample may show Ehrlichia bacteria inside white blood cells. Another test, called polymerase chain reaction (PCR), is a very sensitive assay to detect bacteria in the blood sample, but it is not always available.

Antibiotic treatment should begin immediately if ehrlichiosis is suspected, even if laboratory results are not available. Treatment with either tetracycline (Sumycin, Achromycin V) or doxycycline (Monodox, Vibramycin) is recommended. Many patients with ehrlichiosis are admitted to the hospital for treatment.

For otherwise healthy people, a full recovery is expected following treatment for ehrlichiosis. Elderly patients are at a higher risk for severe disease, which may be fatal. Serious complications include lung or gastrointestinal bleeding. Two to 10 patients out of 100 die from the disease.

The only prevention for ehrlichiosis is to minimize exposure to ticks by staying on the trail when walking through the woods, avoiding tall grasses, wearing long sleeves and tucking pant legs into socks, wearing insect repellent, and checking for ticks after an outing. Remove a tick as soon as possible by grasping the tick with tweezers and gently pulling.

Tick-borne disease— A disease that is spread to animals by the bite of an infected tick.

Hemorrhagic Fevers , DEFINITION Hemorrhagic fevers (pronounced heh-meh-RA-jik) are a group of diseases caused by viruses. They occur throughout the world, but are most co… Hantavirus , DEFINITION Hantavirus infections are caused by a group of viruses known as hantaviruses. These viruses cause two serious illnesses in humans. They ar… Mycoplasma Infections , Mycoplasma (my-ko-PLAZ-muh) infections are caused by a type of very small bacteria. These infections usually involve the lungs or the urinary and gen… Campylobacteriosis , Campylobacteriosis Definition Campylobacteriosis refers to infection by the group of bacteria known as Campylobacter. The term comes from the Greek w… Hepatitis , Hepatitis is inflammation of the liver, a potentially life-threatening disease most frequently caused by viral infections but which may also result f… Cat-scratch Disease , Cat-Scratch Disease Definition Cat-scratch disease is an uncommon infection that typically results from a cat's scratch or bite. Most sufferers exper…