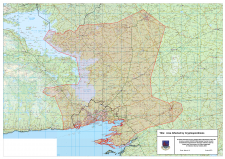 The most common symptom of cryptosporidiosis is watery diarrhea. Other symptoms may include abdominal cramps, nausea, low-grade fever, dehydration, and weight loss. Symptoms usually develop four to six days after infection, but may occur from two to 10 days after infection. In individuals with healthy, normal immune systems, the disease usually only lasts for several days, and rarely more than two weeks. Some infected persons may not even become ill, while others become ill, seem to recover, but become ill again. Infected persons may shed oocysts in their feces for months, even when they are not exhibiting disease symptoms.

Cryptosporidiosis can cause complications in persons with diabetes, alcoholism, or pregnancy. Diarrhea and dehydration can severely affect the very young, the elderly, and the frail. Cryptosporidiosis can be prolonged and life-threatening in immuno-compromised individuals (those who have weak immune systems), such as transplant patients, people infected with the Human Immunodeficiency Virus (HIV) (which causes Acquired Immuno-Deficiency Syndrome [AIDS]), cancer patients on chemotherapy, and persons who are taking medications that suppress the immune system. By 1983, the number of infections in humans was increasing as the AIDS epidemic began; also diagnostic methods were developed to identify the parasite in stool samples, which aided in the identification and documentation of the disease.

In industrialized nations, about 0.4% of the population passes oocysts in the feces at any one time, while about 2–2.5% of patients admitted to hospitals are passing oocysts. About 30–35% of the United States population have antibodies in their blood to Cryptosporidium. In developing nations, the prevalence is higher, where up to 60–70% of people have circulating antibodies in their blood to Cryptosporidium. In AIDS patients, the numbers of individuals with chronic cryptosporidiosis is about 10% in industrialized nations and up to 40% in some developing nations.

Cryptosporidiosis cannot be diagnosed by symptoms alone, but must be confirmed with a specific diagnostic stool test for the parasite. There is no drug available to cure cryptosporidiosis. Symptoms are treated with anti-diarrheal medicines and fluids to prevent dehydration. People with strong immune systems will recover on their own and may develop limited immunity to recurring infections.

Infection with Cryptosporidium can also occur by drinking water that is contaminated with oocysts. The first report of spread of cryptosporidiosis through a municipal drinking water system was in 1987 in Carrollton, Georgia, where 13,000 people, out of a total population of 65,000, became ill. In 1993, a municipal drinking water system in Milwaukee, Wisconsin, became contaminated with Cryptosporidium, and 400,000 people became ill. Four thousand people were hospitalized, at a cost of $54 million, and 100 people died, including some persons with AIDS. Both water systems had met all state and drinking water standards. There have also been more than a dozen outbreaks reported in the United Kingdom. These outbreaks demonstrated the risks of waterborne cryptosporidiosis, for unfortunately Cryptosporidium oocysts are resistant to many environmental stresses and chemical disinfectants such as chlorine that are used in municipal drinking water systems and swimming pools (swallowing a small amount of water while swimming in a chlorinated pool can cause cryptosporidiosis). The mechanism that protects oocysts from chlorination has not yet been positively identified—the oocyst membrane may be protective, or an oocyst may pump toxins from its cell before the toxins can cause harm.

Oocysts are present in most surface bodies of water in the United States, many of which are sources of public drinking water. They become more prevalent during periods of runoff (generally from March-June during spring rains in North America) or when wastewater treatment plants become overloaded or break down. Properly drilled and maintained groundwater wells , with intact well casings, proper seals , and above-ground caps, are not likely to contain Cryptosporidium because of natural filtration through soil and aquifer materials.

The detection of Cryptosporidium oocysts is unreliable, for recovery and enumeration of oocysts from water samples is difficult. Concentration techniques for oocysts in water samples are poor, and detection methods often measure algae and other debris in addition to oocysts. The volume of water required to concentrate oocysts for detection can range from 26–264 gal (100–1,000 l). Determination of whether oocysts are infective and viable or a member of the species that causes disease is not easy to accomplish. The development of more accurate, rapid and improved assays for oocysts is required, for present tests are time-consuming, highly subjective, and dependent on the skills of the analyst.

In addition, the number of oocysts (the effective dose) required to cause cryptosporidiosis has not yet been well-defined and requires more investigation. Studies to date have suggested that the 50% infectious dose may be around 132 oocysts, and in some cases, as few as 30 oocysts (infections have also occurred with the ingestion of a single oocyst). Human susceptibility to Cryptosporidium likely varies between individuals and between various Cryptosporidium strains.

Therefore protection of drinking water supplies from contamination by Cryptosporidium requires multiple approaches. Filtration of drinking water supplies is the only reliable conventional treatment method. Water in a treatment plant is mixed with coagulants that aid in the settling of particles in water; removal can be enhanced by using sand filtration. Ozone disinfection can kill Cryptosporidium but ozone does not leave a residual in the distribution system as chlorine does, which provides protection of treated water to the point of use but does not neessarily kill Cryptosporidium anyway.

Watershed protection to prevent contamination from entering water sources is also important in protection of drinking water supplies. Regulation of septic systems and best management practices can be used to control runoff of human and animal wastes.

An individual can also take steps to ensure that drinking water is safe. Boiling water (bringing water to a rolling boil for at least one minute) is the best way to kill Cryptosporidium. After boiling, the water should be stored in the refrigerator in a clean bottle or pitcher with lid; care should be taken to avoid touching the inside of the bottle or lid to prevent re-contamination. Point-of-use filters , either attached to a faucet, or the pour-through type, can also be used to remove Cryptosporidium from water. Only filters with an absolute, rather than a nominal, pore size of one micron or smaller should be used to remove oocysts. Reverse osmosis filters are also effective. Lists of filters and reverse osmosis filters that will remove Cryptosporidium oocysts can be obtained from NSF International, an independent non-profit testing agency.

The use of bottled water is not necessarily safer than tap water, as water from a surface water source has the same risks of containing oocysts as tap water from that source, unless it has been treated with appropriate treatment technologies, such as distillation, pasteurization, reverse osmosis, or filtration with an absolute one micron rating, before bottling. Bottled water from deep groundwater wells has a low likelihood of being contaminated with oocysts, so the labels on water bottles should be examined before use to determine water source and treatment methods.

Food can also be a source of Cryptosporidium. In 1996, in the Northeastern United States, unpasteurized apple cider and juice was associated with Cryptosporidium infections. In 1997, in Spokane, Washington, members of a group attending a dinner banquet become ill with cryptosporidiosis. The parasite may be present in uncooked or unwashed fruits and vegetables that are grown in areas where manure was used or animals were grazed or in beverages or ice prepared with contaminated water. Pasteurization of dairy products will kill oocysts. Bottled and canned drinks, such as soda and beer, are usually heated and/or filtered sufficiently to kill or remove Cryptosporidium oocysts. Care should be taken to wash hands thoroughly with soap and water before eating, preparing or serving food. Fruits and vegetables that will be eaten raw should be washed or peeled before being eaten. When traveling to areas with poor sanitation , extra care should be taken in the selection of food and drink.

Giardiasis , Origins Giardiasis is a communicable gastrointestinal disease characterized by acute diarrhea. It is caused by a parasite, Giardia lamblia, also know… Amebiasis , Definition Amebiasis is an infectious disease caused by a parasitic one-celled microorganism (protozoan) called Entamoeba histolytica. Persons with a… Yersinia , Purpose Yersinia is a bacterium that can contaminate food and is responsible for a foodborne disease called yersiniosis. Yersinia is a serious issue… Cryptosporidiosis , Cryptosporidiosis Cryptosporidiosis (also referred to as Crypto) is a gastrointestinal illness that results from exposure to the organism Cryptospori… Coccidiosis , Cyclosporiasis Cyclosporiasis, (sigh-clo-spore-EYE-uh-sis) also called Cyclospora, is an infection caused by the pathogenic protozoan Cyclospora caye… Campylobacteriosis , Campylobacteriosis Definition Campylobacteriosis refers to infection by the group of bacteria known as Campylobacter. The term comes from the Greek w…