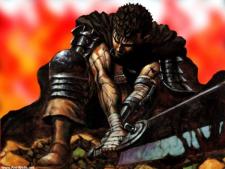 ber·serk / bərˈzərk; -ˈsərk/ • adj. (of a person or animal) out of control with anger or excitement; wild or frenzied: after she left him, he went berserk, throwing things about the apartment. ∎  (of a mechanical device or system) operating in a wild or erratic way; out of control: the climate control went berserk and either roasted or froze us. ∎  (of a procedure, program, or activity) fluctuating wildly: the stock market's gone berserk, with sugar at 15.27 cents a pound. ORIGIN: early 19th cent. (originally as a noun denoting a wild Norse warrior who fought with frenzy): from Old Norse berserkr (noun), probably from birn-, bjҩrn + serkr ‘coat,’ but also possibly from berr ‘bare’ (i.e., without armor).