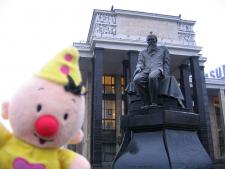 The Russian State Library is the largest library in Russia; the second largest library in the world after the Library of Congress, with holdings of more than forty-two million volumes. It is also a major scientific research center for library studies, bibliography, and book studies.

Founded in the center of Moscow in 1862 as the Moscow Public Museum and Rumyantsev Museum, the Russian State Library had its origins in the library of Count Nikolai Rumyantsev (1754–1826), whose outstanding collection of books, manuscripts, and cartographic materials, including 710 manuscripts and 28,500 books, was donated to the Russian state to form the Rumyantsev Museum in St. Petersburg in 1831. The library was administered by the Imperial Public Library from 1845 to 1861, when it was transferred to Moscow. The new library grew rapidly by means of its status as a legal depository of all publications issued in the Russian empire, a privilege granted until 1862 to only three libraries: the Imperial Public Library, the Library of the Russian Academy of Sciences, and the Helsinki University Library. It also benefited from collections donated by some of Russian's most prominent public figures, scholars, scientists, and writers, and by their families.

With the nationalization of libraries and cultural institutions after the October 1917 Revolution and the move of the capital from St. Petersburg to Moscow in 1918, it became the main library of the country. Its name, which had changed in 1869 to Moscow Public and Rumyantsev Museum and in 1913 to Imperial Moscow and Rumyantsev Museum, changed again in 1917 to State Rumyantsev Museum. In 1921 the library was reorganized to become separate from the museum: It was assigned the function of a state repository, and granted the status of national library. In 1924 its name was changed to V. I. Lenin All-Russian Public Library, in 1925 to V. I. Lenin State Library of the USSR, in accordance with its new status as the national library of the USSR, and in 1992, with the dissolution of the USSR, to Russian State Library.

The library was originally housed in the former residence of retired military officer Pyotr Pashkov, in a building known as Pashkov House, built by architect Vasily Bazhenov from 1784 to 1786 in the Russian classical style. The building had a reading room for twenty people and was expanded over many decades to accommodate readers and collections. In 1958 construction was completed on a new library building adjacent to the original building, with reading rooms for more than 2,000 readers. In addition, a branch opened in 1975 in Khimki on the outskirts of Moscow to house newspapers and dissertations. While focused on collection, preservation, and service relating to Russia's cultural heritage, the library's mission reflects its status as one of the world's finest repositories of the creative and intellectual output of humankind.

Nikolai Ivanovich Novikov , Novikov, Nikolai Ivanovich (1744–1818) NOVIKOV, NIKOLAI IVANOVICH (1744–1818) NOVIKOV, NIKOLAI IVANOVICH (1744–1818), for about three decades one of… Melvil Dewey , Melvil Dewey The American librarian and reformer Melvil Dewey (1851-1931) established the Dewey decimal system of classifying books and played a prom… Manuscript , manuscript, a handwritten work as distinguished from printing. The oldest manuscripts, those found in Egyptian tombs, were written on papyrus; the ea… Bodleian Library , BODLEIAN LIBRARY , the official library of the University of Oxford, named after Sir Thomas *Bodley who refounded it. It is one of the world's greate… Library , library, a collection of books or other written or printed materials, as well as the facility in which they are housed and the institution that is re… Library Of Congress , The Library of Congress, located in Washington, D.C., is the world's largest library, with nearly 110 million items in almost every language and form…